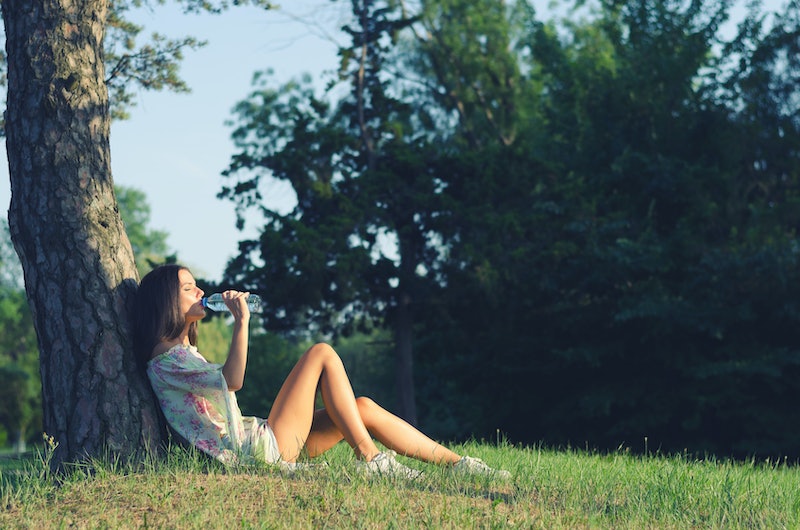 We all know that we need to drink water, and according to the Centers for Disease Control and Prevention, most of us are getting our 64ish ounces per day. But what if the water we're drinking isn't doing enough? That's the question presented by manufacturers of hydrogen water, who say that adding hydrogen molecules to regular water creates health benefits that you can't get from regular tap water. What is hydrogen water? According to TIME, it's water with extra hydrogen gas added in (although you can buy hydrogen tablets and add them to water yourself). The idea is that we need hydrogen to live, and you can't have too much of a good thing.

Online, the products make some pretty bold claims. One brand promises to help with athletic performance, decreased inflammation, and easing allergies. Another says it "neutralizes and protects against free radicals." Yet another says the water "uses purified water as a vessel to deliver hydrogen gas into the cells of your body." But does any of it actually work as it says it does?

For experts, the answer is simple. "Hydrogen water is H2O with increased hydrogen contents. The evidence is simply lacking in terms of these claims of increased energy and decreases fatigue with hydrogenated water," Kelly Pritchett, PhD, RDN, CSSD, who is a spokesperson for the Academy of Nutrition and Dietetics, tells Bustle.

Melissa Majumdar, MS, RD, LDN, CPT, who also works with the Academy of Nutrition and Dietetics, tells Bustle that "the jury is still out" on whether hydrogen water has any antioxidant or energy-boosting effects. If you want to boost your diet, she says, hydrogen water isn't the way to do so. "There is not enough quality research to demonstrate a true relationship, so it's a better idea to invest in what is know about an anti-inflammatory or antioxidant rich diet and to use a balanced diet as fuel," she says. "Water in general is an important part of our diet, but at this point, there's no need to spend the extra cash on the hydrogen."

Majumdar also notes that the levels of hydrogen in hydrogen water differ from company to company, and there's not any one industry standard. Hydrogen water is GRAS-certified by the Food and Drug Administration, which means that it's generally recognized as safe, but she tells Bustle there isn't any regulation in the industry, and "companies that sell hydrogen water don't have cited research on their websites."

"The good news is that all water contains hydrogen."

Studies have indeed shown some benefits of drinking hydrogen-rich water. For example, it's been shown to help with blood oxidation in patients with liver tumors. Another study found that hydrogen-rich water could help people with metabolic syndrome, which is a group of conditions (like high blood pressure or cholesterol) that increase risk for heart disease, stroke, or diabetes. But this research doesn't focus on benefits for healthy adults, which is why experts are wary of the purported effects of the water. "The good news is that all water contains hydrogen, so in the meantime while research catches up with the trends, we can still get the H in the H2O," says Majumdar.

The experts didn't point out any risks from drinking hydrogen water, so it's not like you need to avoid the drink at all costs, but be aware that you could be spending money unnecessarily if you're buying it. Hydrogen water starts at about $3 per bottle, which means that you're paying more than you would for plain bottled water (or what you would for tap water, which is free). If you want to stay healthy, it's probably safest to do things the old-fashioned way and drink a lot of regular water. You'll still get the hydrogen without spending the extra cash.