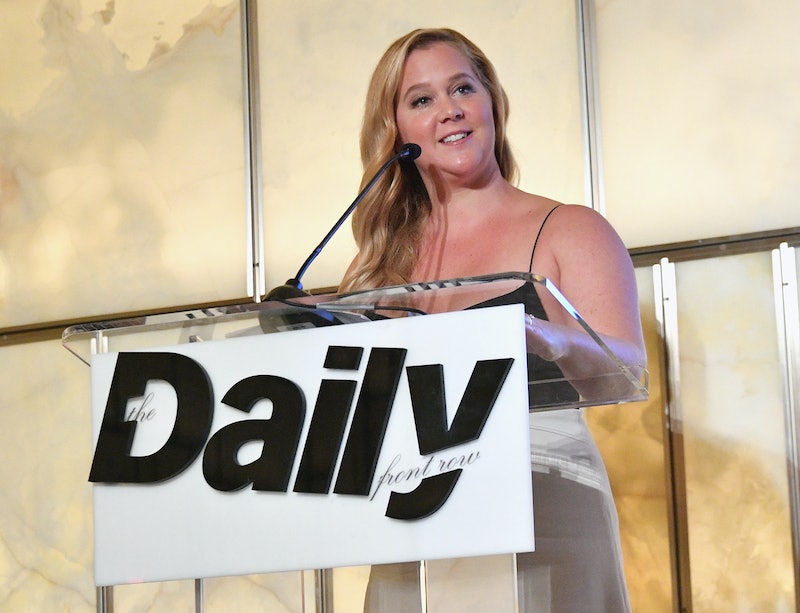 Comedian Amy Schumer had to cancel her upcoming tour dates because she’s been hospitalized for hyperemesis gravidarum, she posted on Instagram. The comedian posted a photo of herself lying in a hospital bed, with a caption explaining that she has a severe form of morning sickness.

“Baby's fine, but everyone who says the second trimester is better is not telling the full story,” Schumer said in her Instagram post. “I've been even more ill this trimester. I have hyperemesis and it blows." So what exactly is hyperemesis gravidarum, and why was it serious enough to put Amy Schumer in the hospital?

Hyperemesis gravidarum (HG) causes nausea and vomiting during pregnancy that is so extreme that you can become dehydrated, or malnourished, TODAY reports. Dr. Amos Grunebaum, director of obstetrics at New York Presyterian/Weill Cornell Medical Center, told TODAY that in some cases, if HG isn’t treated with intravenous fluids and anti-nausea medications, the condition can be life-threatening.

The medical community isn’t clear about what causes HG, but some think it has to do with changes in hormone levels, says Cleveland Clinic. What has been consistent is that HG typically occurs within the first two trimesters of pregnancy, according to the International Journal of Women’s Health. The best treatment for HG is early intervention, says The International Journal of Women’s Health, so if you notice you’re experiencing nausea and vomiting that’s worse than it should be, don’t hesitate to reach out for some extra support.

There are still a few hyperemesis-related deaths reported each year, according to The Gynecology & Obstetrics Case Report. The case study noted that patients with HG often aren’t treated as if their condition requires serious medical attention. That’s not entirely surprising since studies have shown that the medical community still doesn’t take women’s pain as seriously as men’s. With that in mind, you might want to bring someone with you to the hospital who can be your medical advocate just to make sure you’re getting the care you need.

Ultimately, Amy Schumer should be back on her feet soon with some rest and some fluids. But her Texas audience should cut her some slack for having to cancel, because hyperemesis gravidarum is no joke.