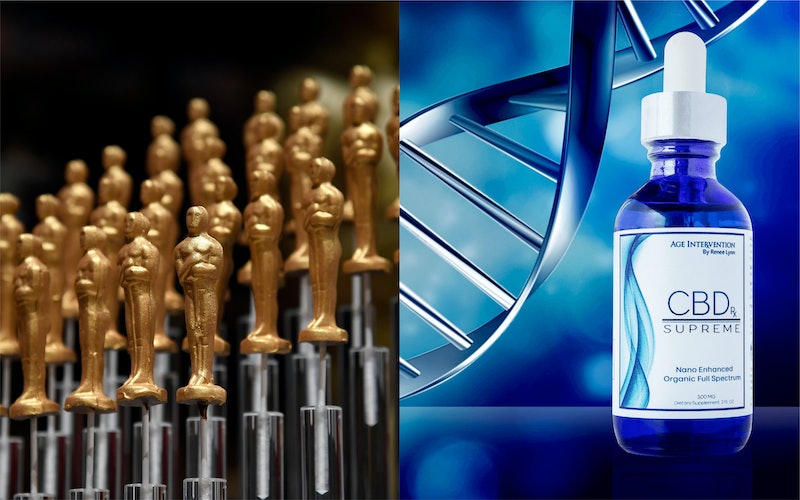 It’s Oscar season. You know what that means, right? Yep: Gift bags full of ridiculous (and ridiculously expensive) items. With the 2019 Academy Awards fast approaching, it’s no surprise that news of the contents of this year’s bags has just emerged — and interestingly, there appears to be kind of a loose (and possibly unintentional) theme tying many of the items together: The 2019 Oscar gift bags have tons of self-care items in them, many of which happen to involve ingredient-of-the-moment CBD. Looks like the lucky recipients of all that swag are in for a super chill night.

As Tanya Pai and Caroline Framke explained at Vox in 2017, Oscar gift bags, which are distributed by companies that have “no relationship whatsoever” with the Academy of Motion Picture Arts and Sciences, are “one of the weirdest and most ostentatious traditions to spring up around the awards show.” When the tradition began in 2001, the Academy actually did gift the bags themselves, but stopped in 2006 due to tax reasons. (The bags are taxable, so when the IRS started to enforce that, they Academy pulled them; said a spokesperson at the time, “It seemed a little inappropriate to offer a gesture of thanks that then carried with it a [tax] obligation.”)

Once the Academy stopped, though, private companies took up the mantle. Why? Basically, it’s a marketing service: Per LA Weekly, companies pay a fee — about $4,000, typically — to have their product put in a gift bag, “with the hope that a celebrity will be photographed using or wearing” it. (There are fewer forms of advertising that are more effective than having a high-profile Someone use your product within full view of their adoring public.) The bags are then distributed to Oscar attendees according to some mysterious determination process — one company, Distinctive Assets, sends them not to the winners, but to the nominees for the best acting and supporting acting categories and best director nominee; these bags are called “Everyone Wins” bags — while the rest of us mere mortals either “ooooh” and “aaaah” over reports of their contents or turn into the personification of the White Guy Blinking meme.

Anyway, this year’s Distinctive Assets bag — which I can only assume is not actually a bag, as I cannot figure out how the massive list of items included would ever fit in a single, bag-shaped receptacle — contains six figures’ worth of goodies, according to the Independent. Many of the items are what you might call “on trend,” of course — and right now, “on trend” translates to “ostensibly about self-care” generally, and, in some cases, “infused with CBD or THC” more specifically. Of the 51 products, four are vacations, four have something to do with cannabis or cannabis-derived compounds, several are boozy and/or a sweet or treat, two are geared towards dental care (for what it’s worth, I do think taking care of your teeth counts as self-care), and at least two are one-on-one sessions with coaches of some sort. Here are some of the (somewhat absurd) highlights:

(Note, by the way, that all of the CBD- and THC-related items carry the usual disclaimer of not having been evaluated by the Food and Drug Administration and aren’t intended to diagnose, treat, cure or prevent any disease or ailment. Efficacy not guaranteed, check your local laws if you're interested in any of them, etc.)

More like this
6 Abortion Advocates To Follow On TikTok
By Sara Youngblood Gregory
The Viral TikTok “30,000” Sound Fits Nearly Every Scenario
By Courtney Young
Kris Jenner’s Advice For Kim Kardashian Is Going Viral On TikTok
By Courtney Young
8 TikTok Pasta Recipes To Try Out At Home
By Emma Garza
Get Even More From Bustle — Sign Up For The Newsletter