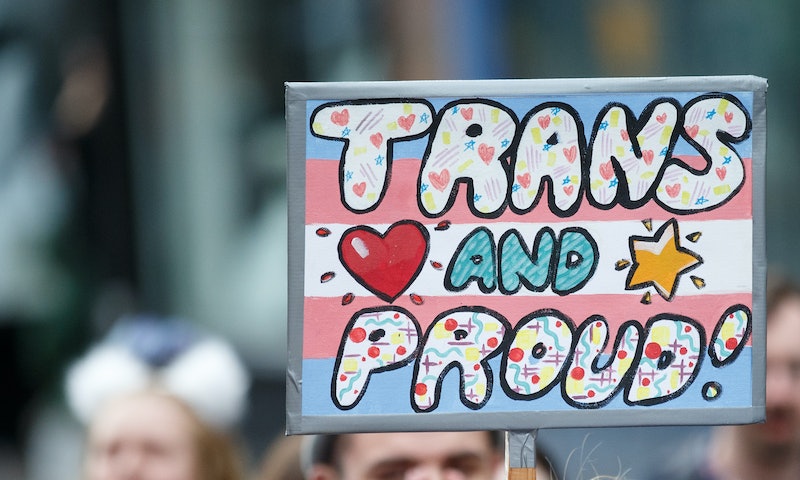 According to The Advocate, a study published this month in The Journal of Adolescent Health found that when people use a transgender person’s correct name, transgender people, and particularly youth, experience fewer symptoms of depression, suicidal ideation, and suicidal behavior. However, says The Advocate, even though it seems like simple human decency, many non-cisgender people are regularly called by the wrong pronouns, which “fuels marginalization, invisibility, and, far too often, violence.”

Maurer wrote that this kind of violence toward transgender and non-binary people often starts with intentionally using the wrong pronouns. Maurer said that using the right pronouns is “a critical step in acknowledging the humanity of transgender and non-binary people.” According to the campaign’s website, he and his colleagues created International Pronoun Day to make asking, sharing, and respecting people’s personal pronouns an everyday thing. You know, like it should be.

Kristine Kippins, board chair of the Sexuality Information and Education Council of the United States (SIECUS), said in a news release emailed to Bustle that their organization was among 250 other groups across the globe participating in the inaugural event. “By taking the small steps needed to learn the pronouns people identify with, we can make a huge impact in affirming their dignity and self-worth — especially for transgender and gender non-conforming youth,” Kippins said.

The International Pronoun Day campaign encourages everyone of any gender to share their pronouns on social media as a way to support the day. You can also add your pronouns to your email signature and social media profiles year-round, wrote fellow Bustle reporter James Loke Hale. Sharing your pronouns regardless of your gender, says Hale, normalizes the practice of sharing pronouns, so it’s not just on transgender and non-binary people to do it. It makes it a much more inclusive process that we’re all in together.

If you want to go big, the campaign says you can also write an op-ed for your local newspaper on the importance of using the correct pronouns, reach out to your local radio station, or even host a workshop in your community or workplace to talk about sharing pronouns. But if all of this is super new to you, they’ve got some great resources on how to ask for people’s pronouns, how to share your pronouns, why pronouns matter, and much more.

Sharing pronouns might seem like such a small thing to do if your pronouns align with the gender identity you were assigned at birth, but it can be life-changing to someone who constantly has to deal with being misgendered. It’s on all of us to make the world a more inclusive place.