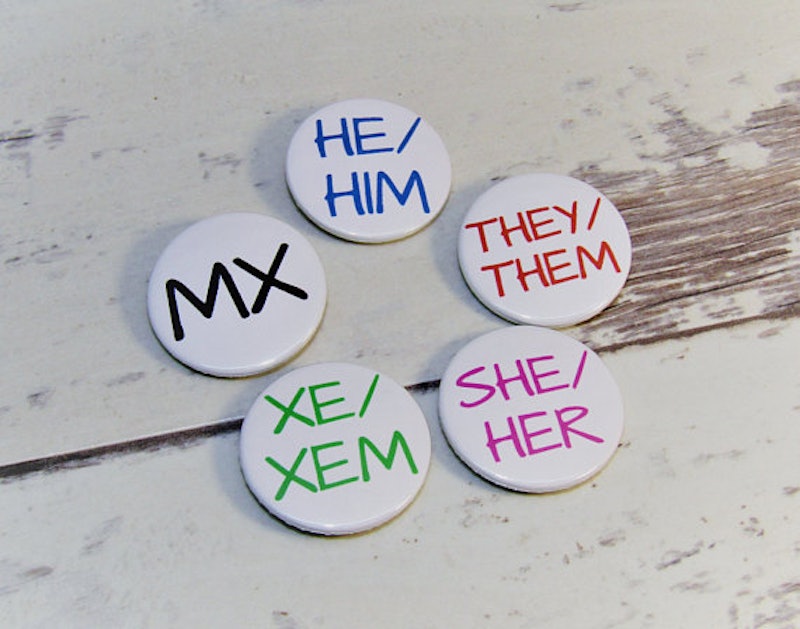 In recent years, it has — thankfully — become quite common in diverse and inclusive circles of social media to include your pronouns on your Twitter profile or Instagram bio. But this practical, simple solution to accidental misgendering is gaining more prominence in other areas of online life, as well. Putting your pronouns in your email signature is an important move towards inclusivity, no matter what your gender is.

Social media users and companies have been embracing gender sensitivity for some time now. In 2014, Facebook finally user-created pronoun "hacks" obsolete when it included the singular they as a pronoun option alongside traditional he/him or she/her pronouns. But there are tons of totally valid pronouns that aren't he/him, she/her, or they/them, which is why the fill-in-the-blank ease of popping your pronouns in your Twitter or Tumblr bio are so welcoming to users.

Listing pronouns is geared toward helping minimize stress for trans people, which is why it's important that cisgender people include their pronouns on their profiles as well. For trans people, putting their pronouns right out there is an elegant, easy way to prevent accidental misgendering. When cis people include their pronouns in their email signatures or social media bios, it helps normalize the practice. It also helps demonstrate the point that whether someone is cis or trans, their pronouns should never be assumed. If you're cis and you're concerned that introducing yourself with your pronouns may be appropriative or disturbing in some way, rest assured — it's not.

It's no secret that trans people of all genders face intense workplace discrimination. And considering the Trump administration is actively working to remove workplace protections for trans folks, showing support professionally is more important now than ever.

Normalizing the inclusion of pronouns in email signatures will be hugely helpful to all trans people, but the legwork of normalization relies on people who are able to share their pronouns, and who are comfortable doing so. Many trans people aren't able to be publicly out in the workplace, and so deal with being misgendered every day in an environment where publicly admitting their true pronouns could get them fired or worse.

Though pronoun inclusion of course can't fix the myriad of issues that working trans people face every day, the seemingly small act of making it a complete non-issue to ask and give one's pronouns upon first meeting is a huge way of helping trans folks gain ground in the workplace.

Even more than the incredibly serious workplace challenges trans people deal with is the fact that taking pronoun introduction from social justice-oriented social media circles to professional circles is part of the process of bringing pronoun introduction into the world at large. It's not ridiculous to hope that one day standard introductions won't just be name, or name and profession, but name and pronoun by respectful default.

Should you start including your pronoun in your email signature, you're probably going to face some awkward questions, whether you're trans or cis. That's just a fact of our current existence — one that normalization will help erase. If you're cisgender, this is a good opportunity to educate people about why pronouns should never be assumed.

While it's definitely helpful on every level for pronoun introductions to become de rigueur, if doing so is not safe or comfortable for you, then don't do it. For us trans folks, including pronouns means being prepared to answer some tough, rude, or maybe even aggressive comments. It means outing ourselves with every email we send — and this is definitely not something that everyone can or should do.

But if you have the ability and confidence to make this small change, remember the huge benefits it offers for everyone, especially those who don't have the same freedoms you might have. This important step towards inclusivity may seem minute, but it has a huge ripple effect.