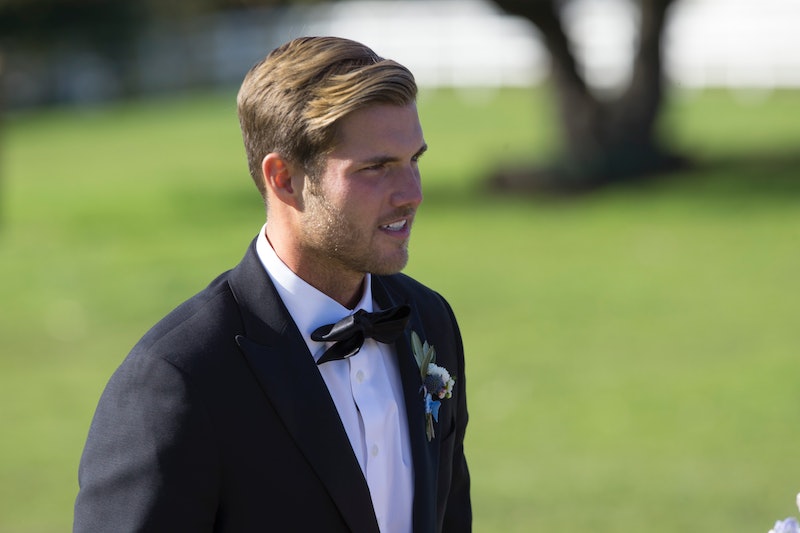 In a complicated season of The Bachelorette, viewers still have one shining beacon of light to save the day: Jordan the model. Say what you will about Jordan, but his ridiculous antics and absurd quotes are the source of most of this season's entertainment, and we should consider ourselves blessed that he's still in the running for Becca's affections. It's only natural to want to keep up with him long after the final rose is bestowed, so let's look at what we know about what Jordan is doing after The Bachelorette.

His Instagram account is — of course — filled with lots of modeling snapshots and promotions for The Bachelorette. Beyond that, the 26-year-old model from Crystal River, Florida, mostly keeps his personal life under wraps. Given the amount of secrecy surrounding the results of the show, he's not really able to reveal much about what he's up to until all is said and done, lest he spoil any of the anticipation. He has recently arrived on Twitter, though, and has proven that he's not afraid of engaging with people poking fun at him on social media. When Bekah from Arie's season of The Bachelor decided to troll Jordan's height and modeling prowess, he was quick to clap back.

And when Bachelor Nation's Dean decided to critique Jordan's fashion sense by going after how his tie was fixed, Jordan defended himself. Insulting his looks is clearly not going to be tolerated by Jordan, on or off the show.

When he's not getting defensive on Twitter, Jordan appears to still be signed with the Miami branch of Wilhelmina Modeling, according to their website, and otherwise living his life as quietly as he can until the powers that be give him the freedom to reveal how his time on The Bachelorette ends. While Jordan hasn't exactly been a frontrunner with Becca so far — his outrageous personality doesn't always mesh with her low-key vibe — he is definitely bringing laughs and silliness to a season that sorely needs both.

Fans of The Bachelorette have been hit with a lot of ugly news in the past several weeks, including the fact that contestant Lincoln Adim was convicted of indecent assault and battery for allegedly groping and assaulting a woman in 2016, Vulture reports. Warner Bros. issued a statement saying that no one involved with production was aware of the incident when Adim was cast, and that the background check conducted "did not reference any incident or charge relating to the recent conviction — or any other charges relating to sexual misconduct."

Earlier in the season, The Huffington Post reported that another contestant, Garrett Yrigoyen, had a history of "liking" posts on social media that mocked feminists, immigrants, and a Parkland high school student, among others. The Instagram account associated with the "likes" was deleted; on a new account, Yrigoyen issued a statement taking "full responsibility for my ‘likes’ on Instagram that were hurtful and offensive.” He added, "I have learned an extremely valuable lesson and am taking steps to grow, become more educated, and be a better version of myself."

Both Garrett and Lincoln remain in the running thus far in the season. While plenty of the other guys are cute and charming in their own ways, the drama offscreen has overshadowed the drama on the show for some viewers. When Jordan waltzes onto the scene, he's a welcome shake-up to whatever else is happening, and his one-liners are creating a fanbase that doesn't want to see him go.

"Jordan is great. He’s making this season tolerable," wrote Reddit user MemesOfTheResistance. "Jordan is the only reason I can get my husband to watch this season," wrote joiedeciel. "I don’t want him to ever leave. I want him to be there always — a critical and amusing commentary on everyone else." Plenty are also hoping that if he doesn't end up with Becca, he'll take his one-liners to Bachelor in Paradise. While viewers can't be sure what exactly Jordan is up to post-Bachelorette, they can enjoy the hell out of him while his time on the show lasts.