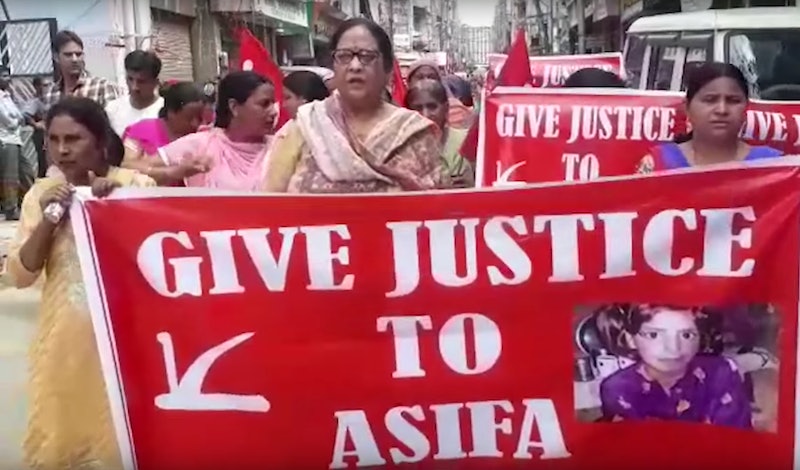 In India, the brutal rape and murder of 8-year-old Asifa Bano has inflamed religious tensions, leading to widespread protests, international attention, and even the social media hashtag #JusticeForAsifa. The crime occurred back in January, but it caught the world's notice this month after a group of Hindu lawyers tried to prevent local police, some of whom are Muslim, from filing charges against the accusers. Several of the alleged perpetrators have already confessed.

Asifa Bano was part of the Bakarwals, a nomadic Muslim community that lives around the Himalayas and often crosses them with their animal herds. They frequently stop in the Jammu valley near the northern tip of India to make use of its public land during the winter, but some of the Hindu-majority community there resents their presence. Jammu is right next to Kasmir, a Muslim-majority area that's been in a fluctuating state of insurgency against the government since 1989. The region sees a lot of violence and unrest.

Warning: This section contains information about a graphic rape, which some may find triggering.

On Jan. 10, Bano was looking for some of her horses after letting them graze for a while. Two men allegedly approached her, telling her that they knew where her animals were and leading her into a forest, where they gave her sedatives and raped her. Police say that the men locked her up in a local Hindu temple and — along with at least one other man — raped her repeatedly over the next few days before finally strangling her on Jan. 13.

Bano's parents were immediately worried that something terrible had happened to their child and went looking for her. They even tried the temple where Bano was imprisoned, but its custodian — a man named Sanji Ram — told them that she wasn't there. According to the police, Ram was the mastermind behind the crime. He allegedly intended to use the violence to scare the Bakarwal people and pressure them to leave Jammu.

Bakarwal women have apparently been terrorized by Ram for years. "His poison has been spreading," one community leader told The New York Times. "When I was young, I remember the fear Sanji Ram’s name invoked in Muslim women. If they wanted to scare each other, they would take Sanji Ram’s name, since he was known to misbehave with Bakarwal women."

Bano's body was found days after her death, abandoned in the forest. The police have arrested eight men for the crime, including two officers who allegedly helped cover it up. Several of the men have confessed and provided details of the kidnapping, rape, and murder.

But that hasn't stopped many Hindus in the area from arguing that the probe has been polluted by bias. While the police investigators say that they have confessions, DNA evidence, and other physical proof tying the accused to the crime, many Hindu nationalists claim that they can't conduct a fair investigation because many of them are Muslim.

Earlier this week, a group of Hindu lawyers blockaded themselves outside of Jammu's Chief Judicial Magistrate office to prevent the police from filing charges. The officers were temporarily delayed but managed to charge the accused later in the day. On Friday, India's Supreme Court admonished the lawyers for attempting to interfere with justice and said that it would examine Bano's case.

Tensions are high in the area. Hindu activists have held many protests there this week, including one that blocked a highway. Bano's family members reportedly left their village on Tuesday out of fear for their safety.

They're still traumatized by her brutal death. "We were waiting for her to return but it didn't happen," her mother told NewsClick, a New Delhi-based news network, last month. "When we think about her, tears come out. It becomes difficult to eat."