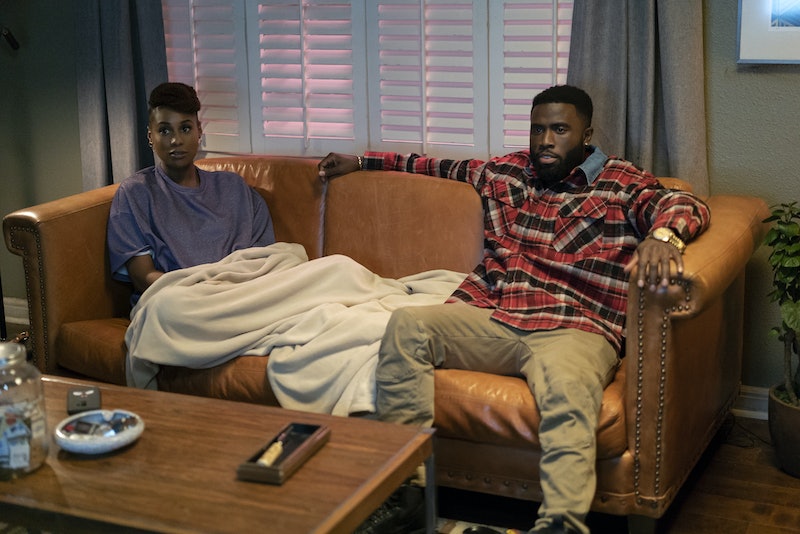 Light spoilers for Insecure Season 3, Episode 1. Season 2 of Insecure brought audiences the irreverent Scandal parody Due North, and with a new season comes a new show-within-a-show. Insecure Season 3 features a Living Single parody called Kev'yn, which feels a little too real in this age of endless TV reboots. This fictional '90s revival stars Erika Alexander, among others, and attempts to tackle subjects like pornography, police brutality, and Black Lives Matter to middling success. And that's the point.

Insecure creator Issa Rae sat down with Bustle on Wed. Aug. 8, at the Park Hyatt in New York, where she discussed both of these shows-within-shows. "[T]here was so much content about slavery and keeping black people in that specific place and period of time," she says of the inspiration for Due North. "And then the salaciousness of shows like Scandal and Empire — we were just like, the worst idea ever would be to combine a slavery show and Empire and Scandal." And that's exactly what they did.

As for how this season's brilliant satire idea came about, Rae says that Insecure showrunner Prentice Penny and some of the writers were joking about one of the extras, "who was conveniently holding a 'How to Write Sitcoms' book in front of the camera in between takes," she says. "And so they were just joking about that. Like, 'Sitcoms? He's trying to write sitcoms?' And then we just started talking about '90s reboots."

She continues, saying, "So initially we had a different show-within-a-show idea, and then they talked to me about this idea for Kev'yn, that was a riff on Martin and Living Single and all these shows from the '90s. And that Insecure should be watching this reboot. And I just loved the idea and was like, 'F*ck the show that we were about to do. Let's do this show.'"

A parody of TV reboots is certainly timely, as '90s sitcoms are being revived left and right, from Will & Grace to Murphy Brown. "Everything's getting rebooted!" Rae exclaims. So it seems only natural that the Insecure writers would take a jab at this wildly popular, often-low-quality television trend. "So many of these shows try to make shows and topics timely, and they don't do it well," Rae points out. "And so we just found it hilarious to have a show that would do the same thing."

Indeed, the little that audiences see of Kev'yn in Episode 1 looks just as cheesy and exaggerated as any real program with a live audience and a laugh track. However, the specific shows that Kev'yn is based on, as Rae points out, are Martin and Living Single. Martin was a sitcom that aired from 1992 to 1997 and starred Martin Lawrence as a Detroit-based entertainment personality. Tisha Campbell-Martin played his girlfriend, Gina, and Tichina Arnold appeared as her best friend, Pam, among others.

Living Single, on the other hand, began airing in 1993 and ran for five years. The sitcom starred Queen Latifah, Erika Alexander, Kim Coles, and T.C. Carson, among others, as roommates in Brooklyn. Ironically enough, Queen Latifah announced early last year on Watch What Happens Live that a reboot was in the pipeline. "We're actually working on it," she told a curious caller. "It's not there yet, but hopefully we can get it happening."

So fans of either Living Single or Martin will be overjoyed to see some familiar tropes and faces on their screens in Insecure this season. What's more, audiences will have an opportunity to see snippets of both the original Kev'yn and the reboot. In the '90s show, which is shown briefly in Episode 1, the cast members' clothes are bright, the laugh-track is prominent, and one character has a flat-top. During one particular scene, a young boy named Lil' Chris steps out of the fridge, which is how he apparently enters the house. Later on, Issa and Daniel (Y'lan Noel) sit on his couch — which she's still crashing on — and watch TV. "They rebooted Kev'yn," Issa tells him. "Lil' Chris, 45 years old, still hiding in cabinets."

So while it remains to be seen how much Kev'yn will feature in this season of Insecure, fans should get excited for the meta sitcom commentary that's sure to come.