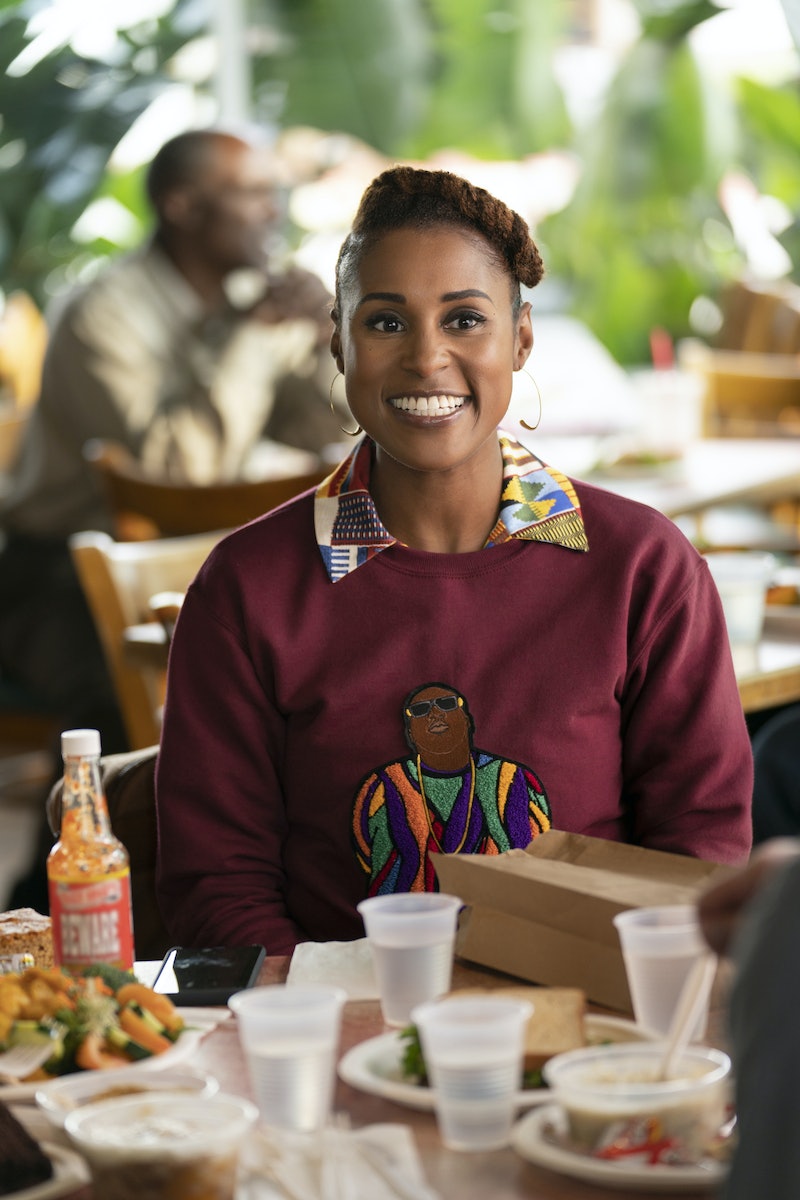 Spoilers ahead for the Season 3 premiere of Insecure. Issa Dee is starting fresh this season. At the end of Season 2, she and Lawrence had officially found some closure and she moved on from her Dunes apartment, complete with the smoke-stained ceiling, to something else. But what? Season 3, which premieres Sunday, August 12 on HBO, finds her sleeping on Daniel's (Y'lan Noel) couch and she's still on desk duty at We Got Y'all, the white-washed non-profit where she works. It might sound depressing, but according to Issa Rae, the HBO show's creator and star, Issa's finally growing up on Insecure Season 3, and although she likely won't conquer all of her fears in one day or maybe even this season, she's finally making moves to get there. That's good stuff.

As the show's title alludes to, much of the show centers around Issa's struggle with self-confidence. Her "mirror b*tch" — the reflection that she raps to — helps psych herself up. "'Issa uses 'mirror b*tch' to manifest things that she wishes she could do," Rae told Bustle on Wednesday, Aug. 8, at the Park Hyatt in New York. "And whether or not those things actually happen, she's just using that as a tool to be like, 'Augh, I wish. If only.' And so much of the show is a journey to...be like, stop saying, 'If only.' Just make it happen."

So how is Issa going to make things happen this season? For starters, there's her job at We Got Y'all. Joanne (Catherine Curtin) benched her at the tail-end of Season 2 for segregating the black and Latino students at one of We Got Y'all's participating schools. This tricky situation was due to a racist vice principal, who didn't want any Hispanic students at their study sessions. Although Issa's been eager to get back into the field, she's stuck pushing paper and twiddling her thumbs behind a desk. "We're setting up in the first episode that she's just in hot water," Rae says, "and you can only stay in hot water for so long before you're like, 'I gotta cool off.'"

Not to mention that her only friend at work, Frieda (Lisa Joyce), has been promoted to Director of Student Outreach — a job that Issa had also been vying for. "When you see other other people advance," Rae explains, "it makes you ask yourself, 'Why, was I not good enough?' or, 'Did I really want it?' and, 'What else should I be doing?'"

So while Rae remains tight-lipped about what's next for Issa professionally, Episode 1 of Season 3 shows her moonlighting as a Lyft driver. Naturally, Molly (Yvonne Orji) rides along in her "Party Lyft" as they offer Capri Suns to passengers and only choose to drive hot men around.

"She jokes in the second episode that she has like, a 3.6 rating?" Rae says of Issa's competency as a driver. "But I think that she would have a solid 4.7." But it's safe to say that neither chauffeuring people around L.A. or working at a performative non-profit seem like great long-term solutions for Issa, which is why this third season feels so promising when it comes to her future.

Sometimes, things have to get ridiculously bad before things can change for a reactive person like Issa Dee. But she's starting to get proactive this season — and it's leading to good things. Better than Lawrence, for sure.

Actually, the Insecure creator hints to Bustle that her character will have not one, but two new love interests this season, which is great news for fans who aren't on the Daniel train. "I don't think the 'ho-tation' was for her," Rae says, referring to her character's attempt at living her best single life. Indeed, Issa's endeavors to keep several guys in her pocket last season completely backfired. So what is she looking for now? It's still kind of up in the air.

"I think, at the end of the day, she just wants someone who understands her," Rae says of her character. "And I don't think she knows this yet, but someone who accepts her for her. But she has to figure out who 'her' is. And that's so much of the journey. This season, that's the question that she's definitely asking herself." Sounds like there's a lot to look forward to this season for Issa and her friends.