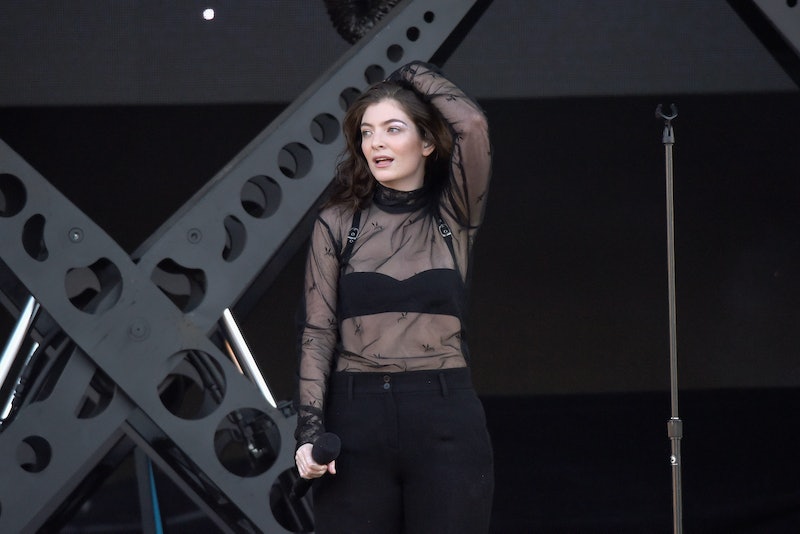 After a long wait, Lorde’s second studio album, Melodrama, is finally here — and it does not disappoint. If you’re one of many who have already listened to Melodrama from beginning to end, then you probably already noticed two songs with similar names in the track listing: “Sober” and “Sober II (Melodrama).” In a recent interview with NPR, Lorde revealed the meaning of "Sober II (Melodrama)": it’s a song about what happens at the end of a party.

“Sober II (Melodrama)” is an obvious continuation of “Sober,” which is listed just five songs ahead of the former on the album. During the interview with NPR, Lorde revealed they “map the course of a party.”

“In the first part, it's very much like the party's in full swing, and maybe sort of tipping over into that area where it might be a little too much, and then ["Sober II"] is sort of singing from the perspective of the deflated room. There's such a sadness to the lights being on after a party, you know, this whole room has sort of been washed in this dark, and to see the corners of the room again can always be a little bit heartbreaking.”

Of course, this interview comes just a week after Lorde discussed “Sober” in a lengthy Twitter thread, in which she explained that she first came up with the concept of the song while doing what all of us are doing when our best and brightest ideas come to us: sitting in the back of an Uber.

It makes sense that “Sober II (Melodrama)” mostly refers to a party, considering the fact that the song is the title track for the entire album. Melodrama is also mostly about a party, according to a interview Lorde had with The New York Times Magazine. “With a party, there’s that moment where a great song comes on and you’re ecstatic,” she said. “And then there’s that moment later on where you’re alone in the bathroom, looking in the mirror, you don’t think you look good, and you start feeling horrible.”

Whatever the concept, Melodrama definitely doesn’t disappoint and if you haven’t listened to it yet, you might want to do that ASAP.

More like this
Selena Gomez Joked About Her Relationship Status In Her ‘SNL’ Monologue
By Grace Wehniainen
Twitter Is Upset About The 'American Idol' Top 3 Results: "Who TF Is Voting?"
By Jake Viswanath
How 2 'American Idol' Singers Performed With COVID-19 & Made It Into The Top 5
By Jake Viswanath
Kourtney & Travis Crashed His Daughter’s TikTok Live In Their 2nd Wedding Outfits
By Grace Wehniainen
Get Even More From Bustle — Sign Up For The Newsletter