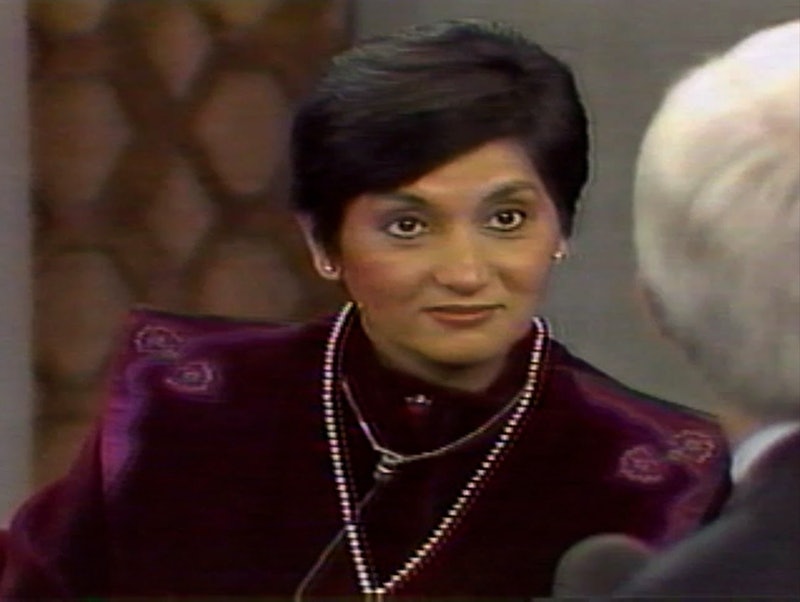 In the '80s, central Oregon suddenly found itself overrun with red-clad followers of a group they didn't understand. Led by guru Bhagwan Shree Rajneesh and his personal secretary, Ma Anand Sheela, the Rajneesh commune quickly became the source of tension and controversy in rural Oregon. The history of this group and the crimes allegedly committed by some of its leaders and members are the subject of a new Netflix docuseries, Wild Wild Country. She's interviewed at length in the new series, but what is Ma Anand Sheela doing in 2018?

Sheela had been a follower of Rajneesh since he began his work in Pune, India, according to Vice. By 1974, Rajneesh's teachings of meditation, free love, and capitalism had attracted around 10,000 followers, but the group, known as an ashram, had also provoked the ire of the Indian government. In order to facilitate Rajneesh's escape from India in 1981, where he was facing allegations of tax evasion, smuggling, and violence, Sheela and her then-husband Marc Harris Silverman purchased a 64,000-acre ranch in Oregon. Known initially as Big Muddy Ranch, and purchased for $6 million, according to The New Yorker, the property in central Oregon quickly became home to Rajneesh, Sheela, and around 7,000 of Rajneesh's followers, as reported by Vice.

But Rajneesh and his followers (known as Sannyasins) were not exactly welcomed with open arms by their new neighbors, according to Vice. Native Oregonians were worried about the group's rapid development of the land, as the ranch soon expanded to contain hotels, restaurants, a fire department, a sewage reclamation plant, a public transit system and an airstrip. According to Slate, the group's territory became so vast that the ranch even had its own zip code. Rajneesh and the Sannyasins began to exert greater control over surrounding communities, even sending enough followers to live in Antelope, Oregon that they were able to take over the local government and rename the town Rajneesh, per the same article.

Tension between the Sannyasins and Oregonians escalated, and Sheela was right in the middle of it all. After a group of Muslim extremists bombed a Portland hotel owned by Rajneesh in 1983, the group formed an armed "Peace Force," per Vice. Then, a new plan was hatched. Slate reported Sheela herself carried a .357 magnum. According to Vice, the Sannyasin leadership attempted to bus 2,000 homeless people in an effort to have them vote Rajneesh supporters into government positions, but they were prevented from casting votes by local officials.

Sheela allegedly masterminded a bioterrorism attack, in which homemade salmonella, carried around in plastic bags, was used to contaminate 10 salad bars in the area: Slate reported that the followers poured the poisonous liquid "directly into salad dressings, splashed it on produce, put it in water, and generally got it everywhere they could." The goal was believed to have been to suppress the vote, and indeed, 751 people fell ill and 45 were hospitalized, per Slate.

According to Slate, Rajneesh later fled the commune, and spoke out against his most loyal follower. He claimed that he had no knowledge of the salmonella attack or a plot uncovered later to assassinate US district attorney Charles H. Turner, and blamed Sheela and her "gang of fascists" for both of the operations. Sheela was arrested and pleaded guilty to the salad bar poisoning and other charges under the Alford plea (which allows you to maintain innocence but admit that evidence could convict you). She was sentenced to 20 years in prison, per The Oregonian. Sheela only served two years of that sentence as part of the plea deal bargaining.

Since completing her sentence, Sheela has moved to Switzerland, where she has since settled down for a much calmer life. The Oregonian reported that that Sheela operates two homes for the mentally disabled, where she and her staff members care for a total of 32 patients. But she is still thinking back on her years with Rajneesh. In a series of interviews with The Oregonian, Sheela revealed that a breakdown occurred between herself and Rajneesh, setting the stage for what she sees as his eventual betrayal.

The conflicts, which she says included drug use by Ranjeesh and his accumulation of various luxuries, eventually became irreconcilable. "I looked into my soul to see my responsibility," Sheela told The Oregonian. "I decided I cannot compromise."

Sheela didn't immediately settle in Switzerland after finishing her prison sentence, however. The Oregonian reported that Sheela first ran restaurants in Germany and Portugal, before movingto Switzerland in 1990 after she caught wind that American authorities were seeking her on new charges. There, she would be free of extradition, per the article.

Now, Sheela is coming forward to share her story. She was interviewed extensively for the Netflix documentary series about the Rajneeshpuram commune, but though she is willing to be interviewed, she hasn't been exactly candid. A Hollywood Reporter review of the series contends that Sheela is "still blunt, combative and completely untrustworthy." Her profile in The Oregonian reveals that Sheela similarly refused to talk about her own actions while involved with the group during the publication's interviews with her. "I am labeled a criminal. It is stamped on my forehead," she told The Oregonian. "I have been punished. Leave me alone."

Wild Wild Country will enable viewers to draw their own conclusions about Sheela's remarkable and controversial life story.