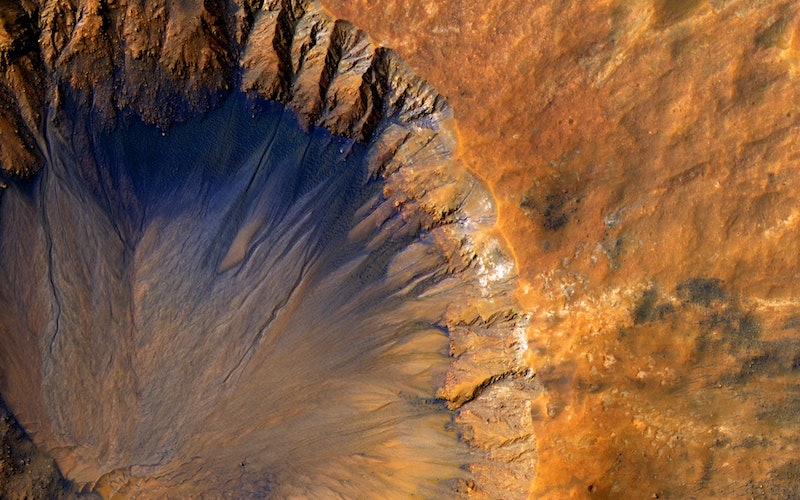 If you believe in astrology, you're likely aware that Mercury, Jupiter, Saturn, and Pluto are all currently retrograde. When planets are retrograde, things tend to go haywire. Little has been said about the fourth planet from the Sun, Mars. What is Mars Retrograde? According to the astrology site Find Your Fate, Mars takes approximately two years to make a complete revolution around the Sun, and moves into retrograde every 26 months for 55 to 80 days.

The good news is that Mars does not become retrograde for 14 months, or June 26, 2018. Universal Life Tools reports that Mars rules energy, passion, action, initiative, and the way you assert yourself in the world. Mars was retrograde at this time last year, so if you recall feeling especially frustrated and resentful during that time, this could be why.

"When Mars is retrograde, this ‘action oriented’ planet's energy lacks vitality as the energy is inverted inward. It can at times feel as if you are paddling upstream, with endless delays, roadblocks, setbacks, and detours dotting your path," states Simone M. Matthews on Universal Life Tools. "It is a bit like capping an active volcano, if the internal pressure builds too much the end result could be very messy."

Even though Mars Retrograde is more than a year away, knowing when it is — and noting it on your calendar — can help you avoid some dust ups. If you've been affected by the other planets that were, or still are, retrograde in 2017, then you know it can wreak havoc on many areas of your life.

For example, if you like to plan a trip a year in advance, you'll want to avoid traveling from June 26 through Aug. 27, 2018, unless you pick specific days (more on that below). Mars Retrograde can trigger mechanical malfunctions, so be prepared for your car, plane, bus, or train to act up. And because Mars Retrograde also depletes your energy, according to Astrologer Lynn Koiner, you might feel like you're wading through quicksand, and therefore have far less tolerance for dealing with sudden problems during this time.

"When Mars is retrograde, it depletes the vitality so that it is never a time to initiate," Koiner says on her blog. "Whoever initiates loses — a new project, a great love, an argument, a lawsuit, or an international war. With a new project, it will fizzle out and never really go anywhere. With a hot romance, it too fizzles and it rarely gets to the altar. With an argument, the hostility will come back to haunt you later."

If you have a big work or personal project that will come due during this period, it might be best to rethink that too.

"A friend who owned a word processing service found this period to always be a disaster," Koiner says on her blog. "During one [Mars] retrograde cycle, the printer, the back-up printer, and the rented printer all failed to work. When they finally got one that worked, the mailing labels printed but there was no ink."

And unlike other retrograde cycles, Koiner says that things don't always improve when Mars goes direct, especially for those who have Mars Retrograde in their birth chart. Things that begin during Mars Retrograde fizzle out when the planet goes direct, which means you have basically wasted two months working on something (project, relationship, etc.) that will fall apart.

"If you need to initiate something while Mars in [retrograde], choose a date when the Moon is making all favorable aspects before it leaves the sign," Koiner advises on her blog, and writes that she includes these dates in her monthly column.

Additionally, astrologer Armand Diaz notes that when planets are retrograde, we are actually drawn to the things we should be avoiding, even though we know better.

So the lesson here is that knowledge is power. If you begin marking retrograde dates on your calendar, you can plan around potential pitfalls. If you think astrology is a bunch of nonsense, then you can take your chances, but honestly I wouldn't recommend it. After all, you're better safe than sorry.

More like this
Your Daily Horoscope For August 15, 2022
By Mecca Woods
The Best Careers For Virgo Zodiac Signs
By Brittany Beringer
How The August 2022 New Moon Will Affect Your Zodiac Sign
By Nina Kahn
The 3 Most Humble Zodiac Signs
By Nina Kahn
Get Even More From Bustle — Sign Up For The Newsletter