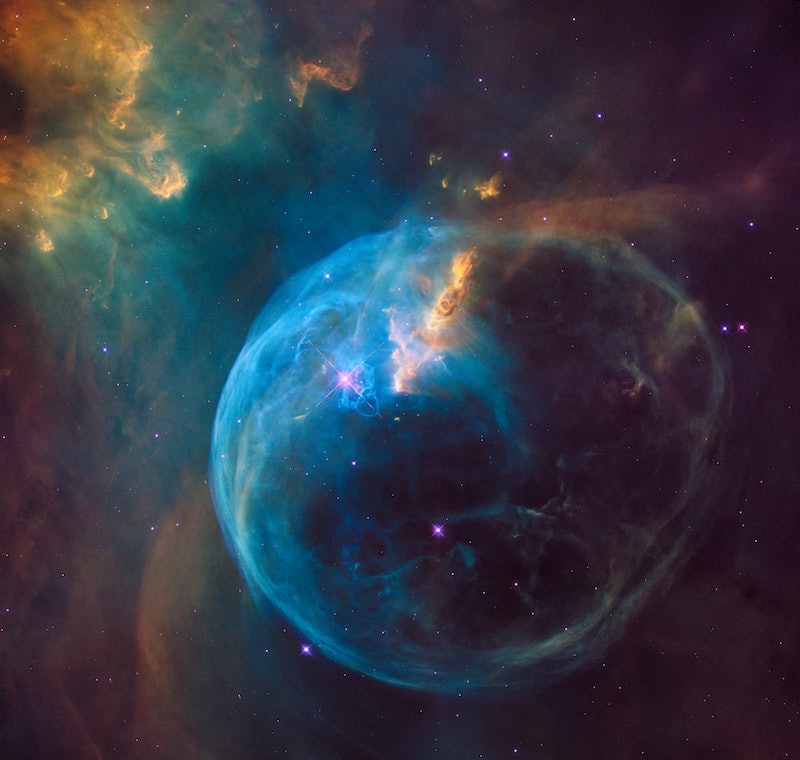 The planet Mercury rules all types of communication, and things are about to go haywire. That's right, the first full Mercury Retrograde of 2017 starts April 9 and lasts until May 3. As if things aren't already tough enough these days, the cosmos decided to make life even more difficult for you. While many planets have retrograde cycles (Jupiter is retrograde until June 9, for example), Mercury is likely the one you've heard the most about. This is because Mercury Retrograde has the ability to wreak havoc on everyone, no matter their astrological sign.

"This phenomenon is one of the few that affects everyone in a fairly uniform way, and its effects are always obvious," Susan Miller wrote on Astrology Zone. "Once you begin to pay attention to how events in your life change during these phases, you will soon see how important it is to take note of them."

Some of the fun things you can look forward to during Mercury Retrograde include misunderstandings, mistakes, and disruptions related to listening, speaking, learning, reading, editing, researching, negotiating, selling, buying, travel, shipping, and anything related to computers and phones.

"When this planet retrogrades, these areas tend to get scrambled or spin out of control," Miller wrote.

There is also a slight overlap between Venus and Mercury's retrograde periods. Venus Retrograde, which ends April 15, can cause you to be overly impulsive and trigger heightened feelings of love and desire that aren't necessarily real. During the six-day overlap, your impulses could be thwarted by communication meltdowns, which could be a blessing or a curse, depending on how you look at it.

If you impulsively send a text to an ex-lover and it doesn't go through, that could be a good thing. But it also means you're at risk of sending that steamy Venus-Retrograde-induced text to the wrong person, like your boss. I'm exhausted just thinking about this.

Mercury Retrograde begins in stubborn Earth sign Taurus, which means life can become slower and more frustrating than usual. The astrology website Find Your Fate advises, "Be very practical about finding a solution, and strictly adhere to limits of time or budget. Money often plays a big part of both the problem and the answer when Mercury is retrograde in earthy signs [like Taurus."

Luckily, things will ease up when Mercury moves into Aries on April 20.

In 2017, Mercury retrogrades four times, beginning a new nine-year cycle, according to Find Your Fate. During this time, expect new people and new situations to enter your circle who can determine the direction of your life for the next nine-year period. While that might feel like a lot of pressure, because nine years seems like a long time, Mercury can bring about transformations in your life that you might not have envisioned, which can be a good thing.

For your best chance of having a smooth Mercury Retrograde, don’t make any important moves, sign any contracts, or launch a new endeavor. Miller also writes that it's not a good time to have any type of elective surgery, because doctors are affected by the retrograde too.

"It’s not that the people you are dealing with are necessarily duplicitous," Miller wrote on Astrology Zone. "It’s just that nobody can fully predict what conditions will be like later. If you start a new job, it won’t necessarily be the position you thought it was when you accepted it. If you are a manager, you will have difficulty choosing the right candidate for the job, so, if you can, hold off hiring anyone. If you buy a house, problems could crop up later that were completely unanticipated."

So what's the good news? Since Mercury Retrograde affects everyone, we're all in this together, and we don't have to go through it again until August.