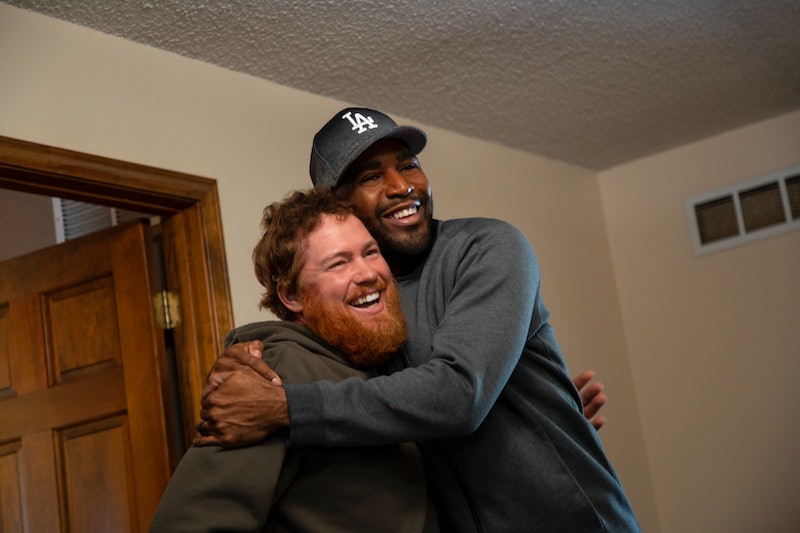 When the Fab Five first met Matt on Queer Eye, his house didn't feel like a home after his recent divorce, his look needed a little polishing, and he was struggling to keep his family farm business successful. But as always, Jonathan, Antoni, Tan, Karamo, and Bobby worked their magic. And they left him in a much better place than where they found him.

Farmer Matt was nominated by a longtime friend who wanted the Fab Five to teach him how to invest in himself — in other words, to practice self-care. Before Queer Eye came along, he worked long hours on the land tending to cattle and crops, wore exclusively jeans and flannel shirts, and spent hardly any time grooming. His idea of styling his hair was simply running a little water through it.

As Matt explained to the guys, one day after returning home from an agricultural speaking engagement, he discovered his wife had left him with their two young kids. Since then, he's been putting everything he has into his once-struggling farm business, which was initially anchored by a seasonal pumpkin patch. He was already working on a few new ideas when the Fab Five arrived — his end-of-episode event was his first farm-to-table dinner — but since then, he seems to have made even more upgrades.

According to the Red Barn Ranch's website, Matt still has the corn maze and that giant silo slide, but has added a corn cannon (aka a missile launcher that shoots corn at pumpkins for $1 per shot), an irrigation arm swing set, a barrel train, pumpkin bowling, tic-tac-toe, corn hole, mini golf, and more.

Admission costs $6 for everyone two years old and up. And it looks like Matt took Bobby's pumpkin decorating advice, because the site says kids get a free mini-pumpkin to paint and take home. You can also stop to feed the animals on the "working farm," as Matt calls it, for 50 cents per cup of food, and you're invited to pack a picnic lunch and hang out as long as you want. The website also says the farm welcomes school field trips and group tours, as well as private events, photo shoots, and weddings. All of the facilities are open to the public on weekends from 9 a.m. to 6 p.m, but you can visit on other days by appointment.

The ranch also has a Facebook page where they keep community members updated on the farm's happenings, like the fact that they're already tending to the pumpkin plants for the upcoming season. And it looks like on Independence Day, Matt celebrated more than America's birthday — he celebrated corralling his loose farm animals back into their pins. Apparently, someone "accidentally" unlocked the animal gate and his goats, sheep, and pig escaped, wandering the land and neighborhood. But thanks to his grandma and neighbor, Betty, he was able to get them all home safe and sound.

Other than the case of the loose petting zoo, Matt and the farm seem to be doing exceptionally well. They just started selling hats as merchandise and even held a sold-out berry picking, just in time for pumpkin patch season. (And oh, by the way, Matt seems to still be sporting a more cleaned up look).