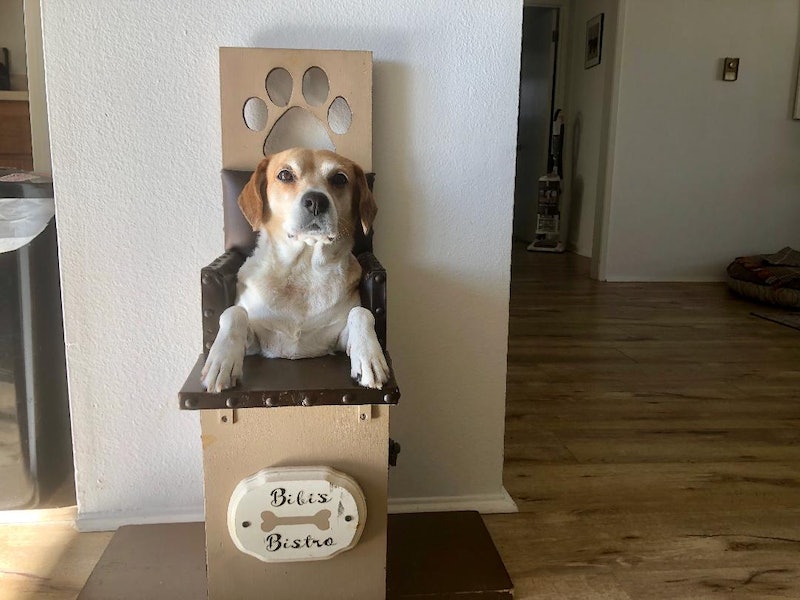 Seven years ago I adopted a street dog from Puerto Rico, a beagle named BiBi. Almost immediately it was apparent that BiBi couldn't keep her food down, and after seeing five different vets she was diagnosed with megaesophagus. The chronic condition is just like it sounds: Dogs that have this condition have an esophagus that's extra large and stretched out like an old sock, which means it's lost its elasticity and it's harder for them to keep food down.

"Megaesophagus is a generalized enlargement of the esophagus — a muscular tube connecting the throat to the stomach — with a decreased to absent motility. Esophageal motility is required for moving food and liquid down to the stomach," PetMD reported. In order for dogs with megaesophagus to be able to get food to their stomachs, they have to eat upright in something called a Bailey Chair, which is basically a highchair for dogs.

The dogs usually sit in their chairs for 30 minutes after eating to let gravity do its job. While many dogs are born with megaesophagus, in some dogs the condition is acquired. And a new report from the University of Melbourne in Australia found an increase in megaesophagus in dogs who ate a particular pet food that had an elevated level of chemicals, or analytes. However, the particular compound that may have contributed to the disorder has not been identified.

According to the study, the clinical investigation into the deaths of dogs that ate the food found a deterioration of esophageal tissue and muscles. This is dangerous because dogs that have megaesophagus can get food stuck in stretched-out areas of their esophagus. Since that food doesn't go to their stomachs, there is a danger that they will inhale it into their lungs, which can cause aspiration pneumonia, a lung infection that comes from inhaling liquid or solids.

BiBi has had AP four times, and it can be fatal if it's not treated immediately. On a daily basis, dogs with megaesophagus often regurgitate their food even after eating in their chairs. This is different from vomiting — when a dog regurgitates it basically opens its mouth and food that hasn't made it to the stomach just comes out.

Signs that a dog has megaesophagus, according to PetMD, include regurgitation, coughing, nasal discharge, increased respiratory noises, weight loss, extreme hunger or lack of appetite, excessive drooling, bad breath, and inability to gain weight. While the condition is manageable, it's chronic and progressive, and it takes vigilance and commitment from pet parents to keep their dogs healthy.

Dogs with megaesophagus not only have to eat differently, they also have to eat different food. Food that slides down the throat easily is best, and many pet parents make wet food into meatballs or blend the food into what's known as a slurry and feed it to their dogs off of a spoon. In addition, the dogs can only have small amounts of water or ice. Feeding the dogs a nutrient rich, high-quality wet food helps them stay hydrated with limited water.

If your dog is diagnosed with megaesophagus, while it is difficult, it's not the end of the world. I'm not going to lie and say it hasn't altered my life — it has. All of the trips to the vet are expensive, I can't leave her with just anyone, I spend a lot of time cleaning up regurgitated food, and even when I do everything right she sometimes still gets AP.

Because of her compromised immune system, she can no longer be vaccinated, which means she can't go places like the dog park and she needs special papers from the vet if she needs to be boarded. However, BiBi is almost 9 years old and she lives a relatively normal life. Despite her condition she is the most spirited dog I have ever had, and she's taught me more about resilience than any person I have ever known.