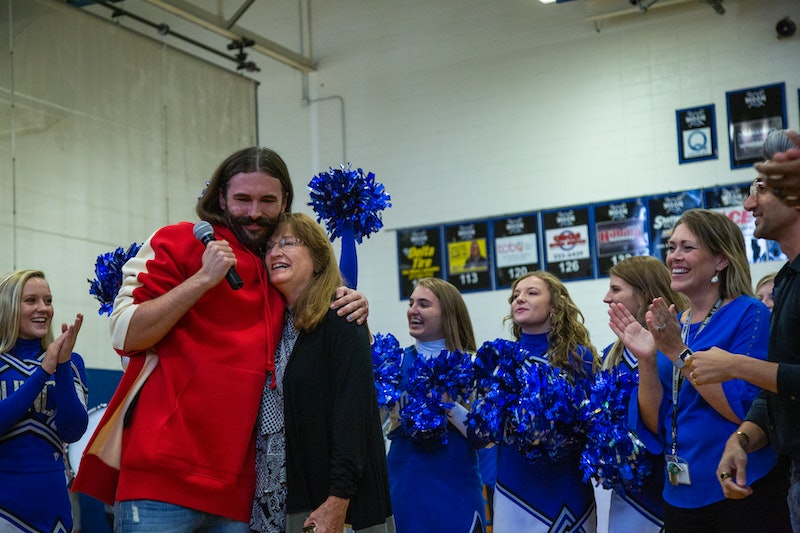 So far, the Fab Five's transformative efforts have been mostly contained to Georgia and Missouri. But Season 4 took them to Jonathan Van Ness' hometown of Quincy, Illinois to give his high school music teacher, Ms. Kathi Dooley, her own Queer Eye make-better. She's a soft-spoken and selfless woman who has headed the district's music program for decades, and for all of those years, she rocked the same signature hairstyle: a fiery red mullet. Despite her admirable consistency, her students, colleagues, and Van Ness himself all agreed that it was time for a new look.

Van Ness couldn't wait to take his scissors to Ms. Dooley's locks, and when he did, she was speechless at the result. She tells Bustle it was an adjustment, but now she likes it. "It took me a while," she says. "Especially when it got cold out, you know, you're always like, 'Why is my neck cold? Oh, my hair is gone.' And the part was different. So it just took me a little while."

But just because Van Ness is back on the road doesn't mean she's off the hook. "[He] still communicates with me all the time and he sort of checks in to make sure that I'm not — 'You're not messing with your hair. You're not letting anyone else touch it. You're not doing that,'" she says. "I guess I'm following the plan as best I can. I get a lot of reaction to my glasses, which Tan picked out and lots of people go on and ask where they could get those."

Ms. Dooley met Jonathan at the end of his fourth grade year when he began learning to play the violin. "He was always very driven to be the best at what he took on to do," she says, recalling a time he danced at the sixth grade talent show. "He had that ice skating thing going on at that time and he really wanted to be a dancer ... it takes a lot of guts for a guy to get up there and to do this interpretive dance to music, when you're, you know, 12 years old."

As mentioned in Queer Eye, Van Ness was also one of Quincy Senior High's first male cheerleaders. "He got a lot of respect, because he was really good at what he did," Dooley explains. "He wasn't pretending to be a cheerleader. He was the real honest to goodness thing ... he could leap as far as any girl and jump as high as anybody else."

As for Ms. Dooley, one thing she learned from Van Ness and the rest of the Fab Five is to pay more attention to herself. In her one-on-one with Karamo, she admitted to skipping over "Chapter Me" and pouring herself into her students. But the guys encouraged her to make time for self-care, reminding her that if she isn't taken care of, she can't be there for her students. And when filming wrapped, she took that advice very seriously: she finally get her hip replaced after two years of putting off the surgery.

"I've had bone-on-bone in my hip for almost two and a half years," she says. "[Queer Eye] really helped me get to that point where I was like, 'I'm going to make this happen.' And so on June 17, I had a total hip replacement in my right hip." She says she's being religious with physical therapy and her pain has already diminished. "That really really pushed me to that because I just kept putting it off," she says. "And that really helped me to say like, 'No, I'll be a better person and a better teacher if I can not be in pain all the time."

A Fab Five makeover and a shiny new hip is just the fresh start Ms. Dooley needed to make it through a few more decades of changing students' lives.