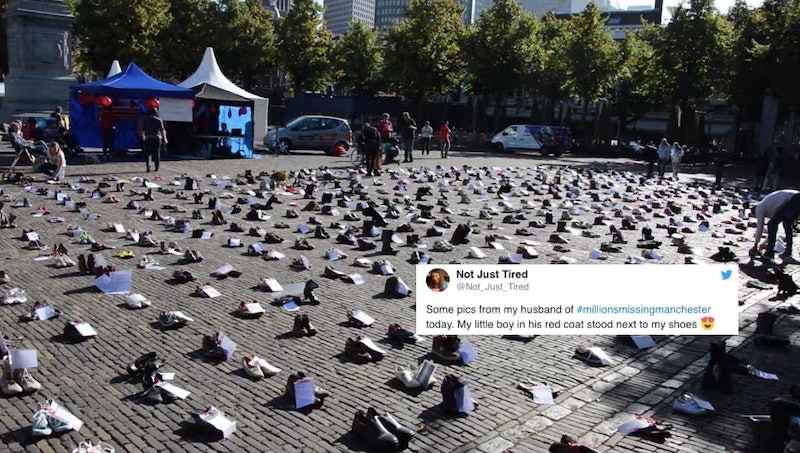 You may have noticed the hashtag #MillionsMissing trending on social media, or may have seen some landmarks lighting up blue over the past few days. That's because May 12 is International Myalgic Encephalomyelitis/Chronic Fatigue Syndrome (ME/CFS) Awareness Day, and the folks posting in the #MillionsMissing tag are speaking out and raising their voices in support of folks who have this chronic illness, which affects between 836,000 and 2.5 million Americans, most of them undiagnosed, according to the Centers for Disease Control and Prevention (CDC).

ME/CFS is not well understood by the medical community, and according to the CDC, is described vaguely as "a serious, long-term illness that affects many body systems." People who have ME/CFS experience chronic, severe fatigue, as well as sleep problems, issues with thinking and concentrating, pain, dizziness, and on top of that, the illness "may get worse after people [...] try to do as much as they want to do," the CDC reports on its website. Hope for Fatigue calls ME/CFS "an incapacitating disease that is characterized by extreme fatigue and decreased mental alertness that does not improve with rest and is not explained by an underlying medical condition."

The #MillionsMissing hashtag is so named to raise awareness "of the millions of patients around the world who are considered to be 'missing' from their careers, schools, families, and social lives due to the debilitating effects of [ME/CFS]," according to Hope for Fatigue. #MillionsMissing demonstrations often involve displaying empty pairs of shoes to represent people who are forced out of their own lives by ME/CFS.

Some folks in the #MillionsMissing hashtag indicate that they struggle to communicate the seriousness of ME/CFS to people who don't have it. "ME is NOT just feeling tired,'" one Twitter user said. "Millions are missing from their lives and desperate for an effective treatment," another tweeted. Another posted, "Looks can be deceiving. Most people with [ME/CFS] appear relatively healthy on the outside. You don't see the worst symptoms because they can't leave their homes or beds."

Columnist Scott Ludlam, writing for The Guardian, puts one of ME/CFS's most devastating symptoms like this: "Sleep just doesn’t work." He added that when you have ME/CFS, "rest doesn’t recharge your body properly," leaving you at the mercy of "a condition that descends from nowhere, for no apparent reason, with devastating effect."

One significant goal of those who participate in ME/CFS Awareness Day and #MillionsMissing is to call attention to the dire need for increased research into viable, helpful treatments for people with ME/CFS. According to Ludlam, most ME/CFS patients in Australia (which is where the May 12 ME/CFS Awareness Day movement is based) are treated with graded exercise therapy — which, as Erin Migdol writing for The Mighty notes, potentially causes more harm than good — and mental health counseling.

Sally Missing, president of ME/CFS support organization Emerge Australia, told The Guardian, "Imagine if all we offered patients with cancer was exercise and counselling [sic]. This is the equivalent of what is happening to patients with ME/CFS." She added, "Patients want biomedical research into effective treatments, education for doctors and medical staff, and access to information and government support services."

Recent research has thankfully begun to unravel the underlying mysteries of why ME/CFS strikes and why it affects people's systems so broadly and significantly. Researcher Sonya Marshall-Gradisnik, an immunologist, told The Guardian that people with CE/MFS appear to have "profound deficits" in ion channels, which are "chemical gateways in cell membranes."

She explained, "As these [ion] channels are more or less distributed in every cell in the body, particularly the brain, cardiovascular system, pancreas, and gut, they exert an extraordinary effect on functions in these systems." And because these systems are so strained, people with CE/MFS are struggling against a fatigue that may be caused just by the effort it takes to stay alive on a cellular level.

If you don't have ME/CFS and don't know much about it, May 12 is a good day to start learning about its effects from those who deal with them every day. Listen to the people speaking out on social media, and remember that though there are many ME/CFS patients and activists tweeting and demonstrating today, there are many, many more who are simply unable to.

More like this
The UK Abortion Laws In 2022, Explained
By Sophie McEvoy
5 Ways To Stand In Solidarity With Women In America From The UK
By Sophie McEvoy
How To Fight For Reproductive Rights, Based On How Much Time You Have
By Courtney Young
For These Abortion Clinic Volunteers, Going TikTok Viral Is A Risk Worth Taking
By Audra Heinrichs
Get Even More From Bustle — Sign Up For The Newsletter