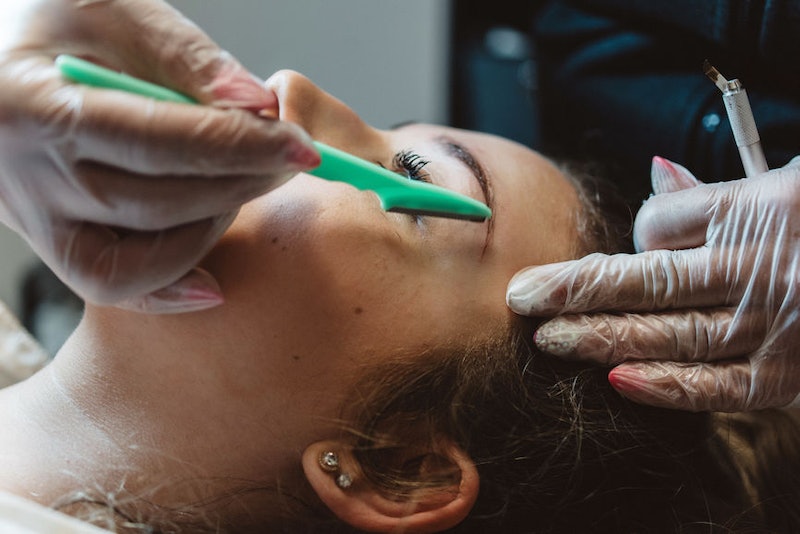 Eyebrows can be a real pain. They're either too thick or too thin and nothing in between. So it's no surprise that many people have swapped tweezing, waxing, and threading for more permanent solutions. (Well, semi-permanent.) While microblading was arguably one of the most popular beauty trends of 2018, a new brow technique is ready to replace it. But what is nanoblading?

Just like microblading, nanoblading is a semi-permanent brow treatment that uses a combination of fine needles and pigment to create realistic-looking hair strokes. Nanoblading, however, uses "ultra-sharp nano needles that can actually mimic the diameter and dimension of real hair in the skin," expert Laura Kay told Harper's Bazaar.

These finer needles can give a more precise look and, with the help of finer pigment, can make both the shape and colour look slightly more natural than microblading. Kay told Elle that the strokes are so fine, they look "like real hair growing from the skin."

As Get The Gloss reports, beauty site Treatwell reckons the number of people trying nanoblading is set to rocket in 2019. But with only 37,000 Instagram mentions compared to microblading's 8.4 million, there is still some way to go before the nano technique hits the mainstream.

The nanoblading process is almost identical to the microblading one. As Harper's Bazaar states, both require a patch test to be carried out at least 24 hours beforehand, both use a handheld tool to dispense the pigment, and both take a similar amount of time. Expect your first appointment to last around two hours. The follow-up — which should be scheduled between four and eight weeks after your initial session — will take approximately one hour.

But there are a few differences between the two techniques. Nanoblading is reportedly less painful, according to Get The Gloss, and can last longer than microblading. The latter usually needs to be topped up within 18 months while nanoblading could last for between two and three years.

Its healing time is shorter too, although it is still recommended that you avoid water and sweating for at least a week after the first appointment. The same goes for excessive sun exposure, make-up, facials, and light or laser treatment. You may also experience some swelling which should go down after a fortnight.

If done properly, microblading or nanoblading can work well on most skin colours. (At first, the colour of your brows will look way darker than you anticipated, but this intensity will reduce over the course of two weeks.)

However, as Vogue's contributing beauty editor Funmi Fetto writes, it's worth noting that "not every brow specialist can perform this treatment on non-caucasian skin." This is because darker skin tones and the pigment being used may look similar in colour, potentially making it difficult for an inexperienced beautician to create a realistic look.

Fetto adds that women of colour "tend to have oilier skin" and that this can also have an effect on the look and lifespan of the brows. So can vitamin C; a product used by many women of colour "to combat pigmentation issues." If in doubt, ask for recommendations wherever possible and to see before and after photos from your chosen specialist.

Price-wise, you can expect to pay a few hundred pounds for a treatment like nanoblading. It's expensive but, to some, the cost is worth the result.