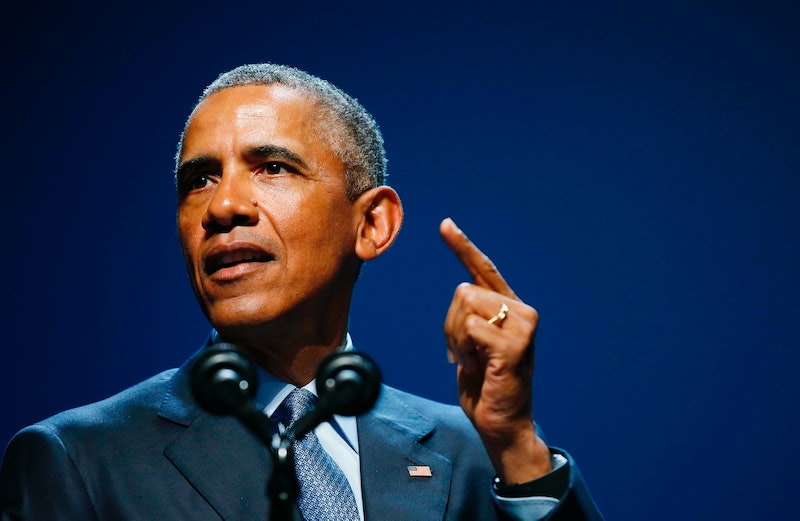 It's been about a year since he left the White House, and in that time, former President Obama has stayed pretty low-key. He vacationed with celebrities, worked on his book, and came out of the woodwork every now and then to denounce something President Trump had said or done. But buckle up, because what Obama is doing in 2018 is going to put him back on your TV screens and Twitter feeds much more often.

According to the Chicago Tribune, Obama will be putting on his political pants again and taking the stage for the Democrats. Obama spokesperson Katie Hill told the newspaper that he would "continue to be politically active in 2018, with more endorsements and more campaigning."

This year will be politically crucial, as the 2018 midterm elections loom, setting up a showdown between Republicans and Democrats for who has the most control in Congress. Several lawmakers have announced their retirement or stated that they will not be running for reelection this year, leaving their seats open for the taking. In 2017, Obama kept his political endorsements at a minimum, throwing his support behind just a couple of Democratic mayoral candidates and the new Virginia governor, Ralph Northam.

President Trump has worked to unravel much of what Obama accomplished during his eight years in office: his health care policies, the Paris climate agreement, fighting sexual assault on college campuses, relations with Cuba, refugee protections, birth control access, gun control — and the list goes on. Again, Obama has mostly stayed fairly silent as he watched his legacy disappear, except when he'd make occasional speeches that would be shared around the nation.

In September, Obama gave a speech at the Gates Foundation, where he condemned nationalism, racism, and xenophobia and spoke out against economic inequality, terrorism, and efforts to repeal the Affordable Care Act.

These challenges are real. They'll take a long time to solve. But that shouldn't discourage any of us from the belief that we can make a difference. It should inspire us to meet the moment. We just have to reject the notion that we are suddenly gripped by forces that we can't control, and embrace the longer, more optimistic view of history and the part that we play in it.

Along with campaigning for Democrats this year, Obama will also focus on some of his own personal projects. He's expected to break ground on the Obama Presidential Center in Chicago, and he'll most likely continue on his book — the release date is still unknown.

So expect to see Obama up in your tweets as the year goes on. For the most part, he's been pretty selective about when and what he puts on Twitter, sometimes going a couple of weeks without tweeting, mostly focusing on celebrating family, birthdays, and accomplishments, while also taking the time to stand up against violent attacks and occasionally mention political events. But as he gets more and more political in 2018, you'll be seeing more and more of him.