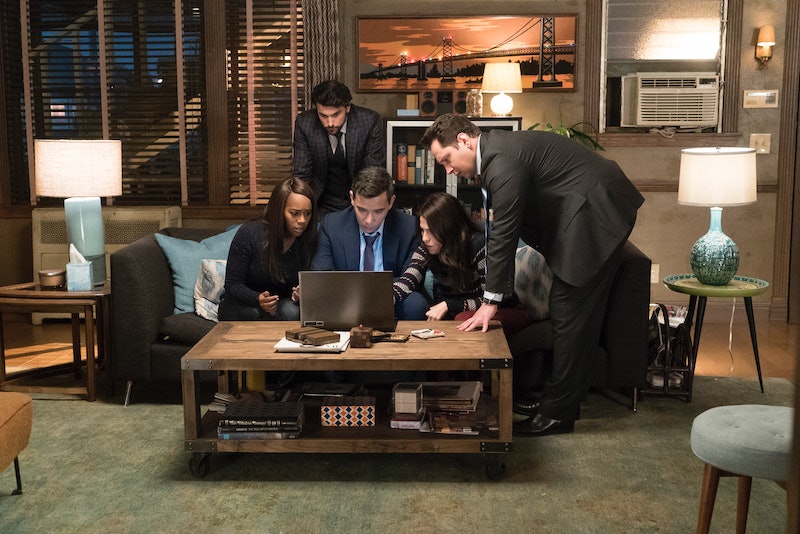 As the season finale of How To Get Away With Murder draws near, it's starting to look like the show's characters might not get away with things this time around. "Operation Bonfire" is heating up on HTGAWM, and the FBI seems to know pretty much everything about what Annalise and her students have done over the last few years.

The FBI's nickname for the investigation into Annalise seems to be inspired by the legendary bonfire in the show's first season. Fans will remember that the then-Keating Five tried to use the bonfire as a way to get rid of Sam's body, although that plan didn't exactly work out for them.

The "Operation Bonfire" whiteboard showing the people of interest features Annalise in the center, and it expands to include everyone from Nate, Frank, and Bonnie to Lila and Rebecca. Plus, it's still not clear exactly whose side Gabriel is on here — he's either playing Annalise or playing the FBI, and it's hard to tell exactly what he's thinking.

And Special Agent Telesco, who gave Tegan an immunity deal last season, is becoming a pretty big player, too. From the way she stares at the investigation board, it looks like Telesco is deep in thought about taking Annalise down — there's a very particular look in her eyes as she stares at Annalise's photo.

Annalise's main goal at this point seems to be framing Governor Birkhead for Nate Sr.'s death and even for Miller's disappearance. (Introduce a new suspect, folks!) I mean, technically it's not framing if Birkhead is actually responsible, but the evidence seems pretty tenuous, based on what's happened so far.

As for Gabriel, it's hard to tell where his allegiances really are. On the one hand, he's thankful for Annalise getting the terrorism charges against him dropped. But on the other, he's pretty rightfully upset to learn that Frank installed a camera in his apartment, and the others knew about it. Other than his feelings for Michaela, which do seem to be genuine, Gabriel (understandably) doesn't seem to like the Keating 4 much. So it's not difficult to imagine that he's trying to take Annalise down through his cooperation with the FBI.

Back to Governor Birkhead, though: Gabriel did plant new seeds in Telesco's mind about her connection to Annalise and Miller, though it's not clear if the special agent is buying the story. Gabriel tells Birkhead that Miller told him about Annalise's plans to adopt Wes, adding in that he heard Miller on the photo with the governor about it.

It seems like Gabriel is lying to the FBI and that he's trying to use the information Annalise gave him to help her. But it's still technically possible that Gabriel did hear that conversation between Miller and the governor. (Birkhead hasn't shown up in a number of episodes at this point, so it's impossible to gauge how involved or uninvolved she was in any of this, although she definitely did have it out for Annalise.)

Gabriel's loyalties — and the potential DNA on Miller's newly discovered body — aside, it does look like the feds are onto a lot of what the group has been covering up. They're aware that Lila's and Rebecca's deaths are likely connected to Annalise and the students. They know about Wes and the Mahoneys. And it looks like they might even know about Asher and Sinclair, because she's on the board, too. Is a jail sentence in the Keating 4's future? It's definitely not out of the question, based on the looks of things.