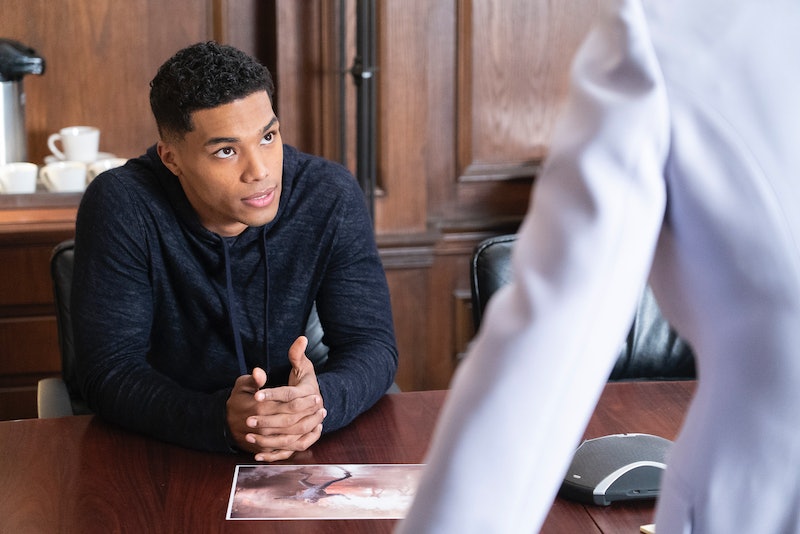 Welp, fans didn't have to wait long to see who Gabriel was calling in last week's How To Get Away With Murder episode. It turns out, that message was left for District Attorney Miller — who, unbeknownst to Gabriel, was already dead. So how did Gabriel and Miller from HTGAWM know each other? The answer is still a mystery, but there's definitely a lot more to Gabriel's story.

Last week, fans saw Gabriel place a phone call, saying in a voicemail that he'd messed up and that "they" (presumably Annalise and the Keating Four) know who he is. It turns out, that call was to Miller, which is a pretty big surprise since the two of them have never interacted on the show before.

As far as Miller is concerned, well, his HTGAWM story was pretty tragic, at least from what fans have seen so far. Nate and Bonnie killed the district attorney because they thought he was involved in a plan to kill Nate's father. But thanks to a wiretap at the prison from which Nate's dad was being transferred, Bonnie figured out that Miller likely wasn't involved in Nate Sr.'s death at all. (Yes, that seems like something she could have confirmed before literally taking his breath away.)

Fans are already coming up with theories about the Gabriel/Miller connection, with some speculating that Gabriel could be an informant spying on Annalise and the students.

Based on the phone call, it looks like Miller knew Gabriel was Sam's son, before the Keating Four did and even before Annalise did. But why would Miller not want Gabriel's classmates to know who he was? It's possible that the D.A. wanted to look into Sam's death, which is what Gabriel wants to know about, too.

If there does end up being evidence that Miller was curious about whether Wes really killed Sam (and whether he acted alone), that's not good news for anyone connected to Annalise. And it's even worse for Bonnie and Nate, especially since Annalise once tried to frame Nate for Sam's death in the first place.

Personally, my favorite reaction to the whole Gabriel/Miller connection is from this fan, who's clearly picked up on one of Annalise's signature lessons for her law students. "Introduce a new suspect" is one of her favorite courtroom tactics — and it could be her way of deflecting attention about Miller's death from Bonnie and Nate. "Frame Gabriel for Miller's death," the fan tweeted. And, sadly, that plan will probably work.

Then again, Bonnie and Annalise have already attempted to introduce new suspects in this week's episode, too. (It's truly the legal workaround that keeps on giving!) Bonnie suggested to her colleague that the prison warden may have been involved in Miller's disappearance, in order to get the wiretap information. And Annalise is already concocting a theory about the Pennsylvania governor orchestrating Miller's death, to keep him quiet about the reported plan to kill Nate's dad.

For a while, it seemed like the season 1 mystery about who killed Sam was far in the past. But it looks like that fateful night with the trophy is still very much a part of the show's current storyline. Miller may have died an innocent man, but he also might have known way more about Annalise's late husband than fans originally knew about.

Until there's more information about how Miller and Gabriel are connected, I'll be thinking about that tear-jerking Post-It scene. Miller seems like a character who was just too pure for HTGAWM's twisted world, and he's definitely gone too soon.