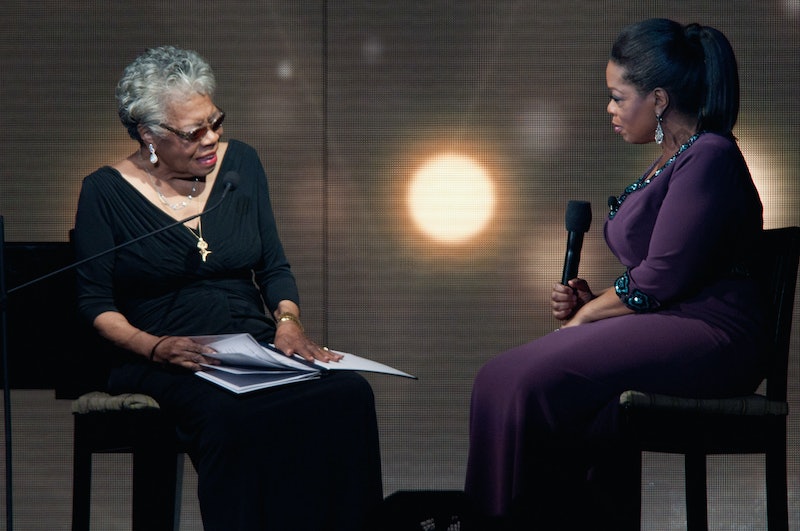 The world is mourning the loss of one of its greatest treasures, Dr. Maya Angelou. The renowned poet, essayist, and activist died in her home in Winston-Salem, North Carolina at the age of 86 Wednesday. We will spend weeks mourning a life that transformed our culture forever. But for black women writers like me, the pain of her passing is etched much deeper.

As Angelou told her stories of abuse, silence, triumph, love and failure, she was carving space for other black women, like me, to insert our work. Trailblazing is an understatement. By simply being, Angelou gave me the courage to tell the truth about a mental illness I’d buried for almost a decade.

It is because of Angelou that I write black girl stories. I was in 12 the first time I picked up Angelou's I Know Why the Caged Bird Sings. Though my mind was still too immature to understand the gravity of her experiences, I can remember being pierced by her unflinching honesty. I mulled over one specific line for months.

If growing up is painful for the Southern black girl, being aware of her displacement is the rust on the razor that threatens the throat.

I was a Northern girl, born and raised in the bowels of New York's Queens Village neighborhood, but her boldness resonated with me. I needed her courage, and she delivered.

Angelou penned her first memoir, I Know Why the Caged Bird Sings , in 1969. The brilliant coming-of-age portrait illuminated issues like rape, Southern racism, and abandonment. Angelou’s memoir was bold in a time when silence was considered a shield. In scholar Christina Greene’s analysis of Black Freedom Movement leaders, she notes that multiple movement figures often “constructed misleading public portraits of themselves” as a form of protection. Silence was a mode of survival. Secrets protected black women from the scorching realities of a world intent upon pulling us limb from limb.

Angelou defied that tradition. She told the secrets we’re told to swallow and never regurgitate. In telling her truth, no matter the consequences, Angelou birthed a generation of word warriors who weren’t afraid to put pen to page. She created a new canon of black women writers.

As Angelou told her stories of abuse, silence, triumph, love, and failure, she was carving space for other black women like me to insert our work. Trailblazing is an understatement.

By simply being, Angelou gave me the courage to tell the truth about a mental illness I’d buried for almost a decade. My agoraphobia was an embarrassment. I never intended to share my story, but every time I read another Angelou memoir, my courage mounted. Her audacity gave me the push I needed to spill the secret that had been suffocating me, and it taught me that destigmatizing illness matters. When I read Angelou's emphatic poem, "Still I Rise," I knew my story of surviving agoraphobia needed to be told.

There is one line in particular that still stops me in my tracks whenever I hear it spoken.

Reading that stanza time and time again comforted me as I exposed my illness to an audience for the first time. It stopped the fear from blocking me. If I am the dream and the hope of the slave, fear has no place in my being.

Angelou's powerful works — from Gather Together In My Name to Mom & Me & Mom — tell women of color that our stories matter. No matter how complex, messy, and untranslatable those experiences are, they are worth telling and they are worth reading.

Angelou told black women writers that we could rise through whatever pains us, and still see the rainbow on the other side of the storm. After losing multiple Black Freedom Movement icons in a single decade, Dr. Angelou could’ve sheltered and shuttered. Instead, she danced. She hit the jitterbug with Amiri Baraka over the interred ashes of Langston Hughes. That joy radiated and attracted multitudes of black women into her fold.

Angelou also knew the importance of embracing other black women, through public friendships with Oprah Winfrey and Dr. Julianne Malveaux. Her willingness to mentor and love those who had endured similar heartaches points to her understanding of how much black women needed her. We needed her.

It was in college that I first laid eyes on Maya Angelou. A member of Bennett’s Board of Trustees, Angelou made time to come to my campus at least once a year. I remember how I began to weep as soon as she was wheeled in.

I was weeping because she saw my small, black women's college in the South as worthy of her time, efforts, and energy. She fundraised to keep our dormitories open. That day, Angelou told us stories about overcoming odds and maintaining her faith; stories about her childhood and meeting President Obama for the first time.

Her last words to us before she left the chapel that day were a line from her poem, “And Still I Rise:” “Up from a past that’s rooted in pain/I rise.” We stood and applauded, and I wondered if she knew how much we, meaning black women writers, cherish her.

In her final interview with TIME, Angelou said, "I’ll probably be writing when the Lord says, 'Maya, Maya Angelou, it’s time.'" That is every scribe’s dream. We want to spend our lives writing on purpose, bleeding on pages and leaving our lives behind for others to find inspiration in.

We owe it to Angelou to remember her in her entirety. We will not remember her in soundbites and snippets. We will read her canon, and ensure that her words live long after her body is interred. For that, black women writers are grateful.

She didn’t outlast the sunset, but Maya Angelou's words will continue to usher in the next dawn.

More like this
She Founded American Girl To “Bring History Alive.” Then She Made Over A Town.
By Amanda FitzSimons
Lego Just Announced Its 'Black Panther' Set Release Date
By Maxine Harrison
Black Women's Equal Pay Day Highlights An Upsetting Problem
By Brandi Neal
Lashana Lynch’s 'Woman King' Training Was “Traumatizing” For A Relatable Reason
By Radhika Menon
Get Even More From Bustle — Sign Up For The Newsletter