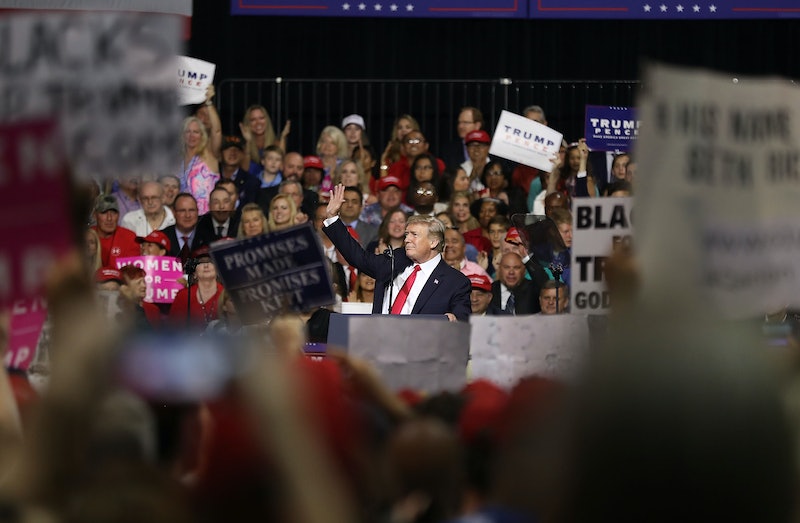 On Tuesday, President Trump traveled to Tampa, Florida for a rally hosted in his honor. It attracted his usual brand of loyal supporters, as well as a number of people wearing T-shirts promoting a far-fetched conspiracy theory that claims to give its followers access to a secret, classified battle taking place behind closed doors at the highest level of government. What this Trump-related conspiracy "QAnon" is is difficult to pin down, but like many other conspiracy theories before it, it originates on the internet.

By most accounts, QAnon began last October, right around the time that Trump posed with a large group of military leaders, remarking that it was "the calm before the storm," a comment that puzzled reporters. Shortly thereafter, a user named "Q Clearance Patriot," or just "Q," as they are known colloquially, started a thread on 4Chan which was seemingly named after the president's comment — "The Calm Before the Storm."

After the thread was established, Q began posting so called "updates" from inside the Trump administration, claiming to have a "Q-clearance," which is issued to people in the Department of Energy. According to The Guardian, Q purported to have insider information about a struggle for power involving Donald Trump, the Clintons, and the "deep state," among other things.

Q reportedly moved their updates from 4Chan to 8Chan, citing security concerns. Q's followers, however, are enthusiastic, and unite across social media under the hashtag #Qanon. Though Trump is not specifically a proponent of QAnon, QAnon believers, by far, tend to be Trump supporters.

Followers of QAnon often need to decode the cryptic clues that Q posts on the internet, which its followers call "breadcrumbs." The clues may relate to certain politicians, government bodies, and current events, though they may also include extremely vague statements like "every dog has its day," according to The Daily Beast.

The same Daily Beast analysis explains the general QAnon storyline. Believers reportedly maintain that every president before Trump was corrupt and in cahoots with a litany of powerful, elite political machinations, as well as death squads, international bankers, and pedophile rings. Per the report, the military convinced Trump to run for president and is now about to send all offending parties off to Guantanamo Bay, i.e. "the storm." Another Daily Beast explainer also notes that QAnon believers subscribe to the idea that Robert Mueller is actually investigating Clinton.

Like any other conspiracy theory, there are offshoots and factions, though they more or less adhere to that general plot line. And these ideas aren't just the stuff of obscure forum threads either, anymore. QAnon has been referenced or directly supported by people like Roseanne Barr, who alluded to pedophile ring-based aspects of the conspiracy theory in a tweet, and Curt Schilling, the MLB-player-turned Breitbart employee.

But even more high profile than its celebrity supporters are QAnon targets. Recently, a man believed to be associated with QAnon appeared outside of Michael Avenatti's office, wielding a long, sharp object, an incident which is still being investigated. And on YouTube, QAnon believers recently also targeted Tom Hanks, claiming without evidence that the actor is a pedophile. For a time, videos supporting those claims appeared at the top of the celebrity's video searches, though that has since changed, according to The Guardian.

It would be easy to write QAnon off as a bit of internet craziness, but conspiracy theories, even those that manifest largely on the internet, have a way of seeping into the real world. Such was the case with PizzaGate, which led to an armed man showing up at a pizza shop, believing it was a front of a pedophile ring. In other words, these conspiracy theories can really fire people up, and can lead to potentially dangerous, violent consequences.

While there were no violent results from the apparent plethora of QAnon believers at Trump's Tampa rally, the internet was awash with excitement as Q appeared to post about the rally in real-time. And the very fact that so many people publicly donned QAnon attire at Trump's rally suggests how easily something originating from the internet can translate into the real world.