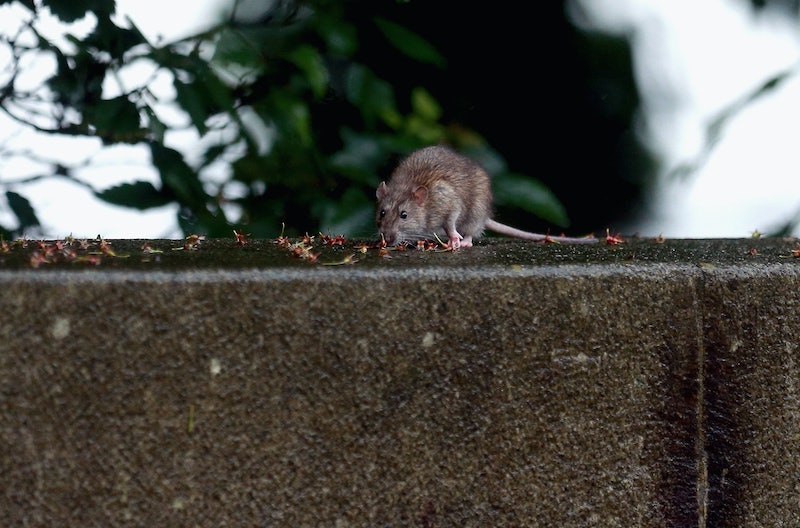 If there's one thing that paralyzes me with fear, it's rats. While it was previously thought that rats couldn't spread hepatitis to people, a case of rat disease has been found in humans. The New York Times reported that a Hong Kong man was diagnosed with rat hepatitis E. And, the case is serving as a wake-up call for city officials, Dr. Siddharth Sridhar, a clinical assistant professor from Hong Kong University's department of microbiology who involved in studying the patient, said in a press conference, according to the South China Morning Post.

"These kinds of unusual infections, rare infections, first instances — even one case is enough to make public health authorities and researchers very alert about the implications." If you live in a densely populated urban area, you've likely come across a rat. New York City even has its own rat mascot known as pizza rat who announces the beginning of summer by dragging a slice of pizza around city streets. While this is a cute anecdote, rats are a real problem. People on Twitter have reported being chased by rats, and one New York City-based Twitter user said he put his coat on and a live rat jumped out of his pocket.

I'll give you a moment to stop screaming.

The South China Morning News noted that at the housing estate where the case of rat disease was found, rats "as big as kittens" roam the property unchecked. Officials have found hepatitis E in at least one rat, and during the news conference, Professor Yuen Kwok-yung, a top microbiologist at Hong Kong University, said the issues needs to be taken serious to avoid another situation like the severe acute respiratory syndrome (SARS) outbreak that plagued the area in 2003, and is thought to have originated in an animal that spread the disease to humans.

"We don’t know if in future there will be a serious outbreak of the rat hepatitis E virus in Hong Kong. We need to closely monitor this issue," Yeun said. What's more, a 2011 study published in the journal Emerging Infectious Diseases reported that the rat disease virus was found in Los Angeles, Calif. However, at the time of the study it was believed that the virus was "not transmissible to rhesus monkeys, suggesting that it is not a source of human infection." With a human being infected in Hong Kong, officials at the news conference said there is no need to panic, but the case does warrant further investigation into the transmission of diseases from rodents to humans.

Because the man was under observation after a liver transplant, and the infection was identified right away, he made a full recovery after being treated with antiviral medication. Sridhar said the best defense against contracting a disease from rats is a good offense. This means making sure rats can't enter your living space. "Ensure there is no food for the rats, which means there is no garbage lying around that the rats can feed on," he advised.

While this is easier said than done if you live in an urban area, you can ensure your apartment is unattractive to rats. The website Pest Kill offers some all-natch remedies to repel rats such as peppermint oil, black pepper, bay leaves, sage, and more. "Using herbs — like black pepper, oregano, and cayenne — is another good alternative in repelling rats. You can sprinkle herbs on plants, soil, doorway crevices, and in entry points," the website noted.

Additionally, studies have reported that rats don't like the smell of cat pheromones, so it you've been wanting to get a cat anyway, this is just one more reason that cats are the best pets. I can personally attest that this is true. After I moved out of a house where we never had rats, my old roommate texted to tell me that rats came inside the house after me and my two cats moved out. If you are bitten by a rat, or your cat or dog catches a rat, take yourself to the doctor and your pet to the vet. Because, when it comes to rats, it's always better to be safe than sorry.