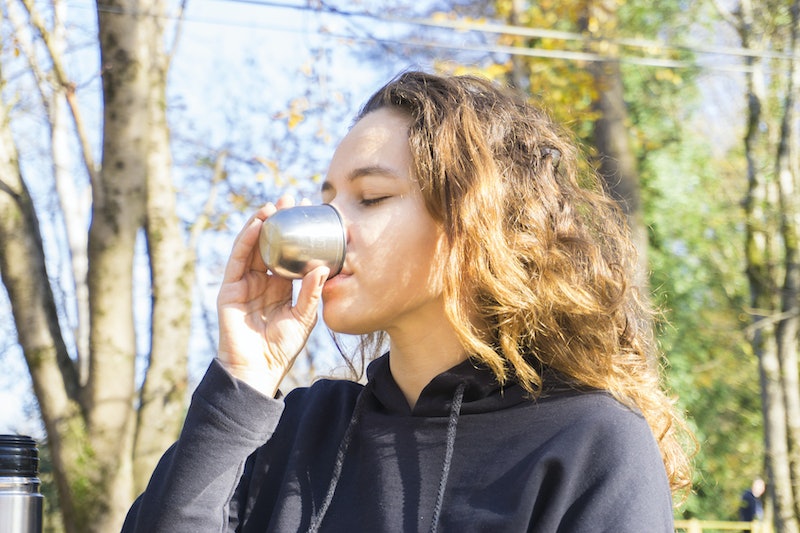 If your social circle is the type to hop on whatever latest, greatest health trend caught the Internet's fancy, you're probably wondering what "raw water" is and why people are forking over so much money for it. As you may have guessed from the name, raw water is, well, raw. It's untreated, unfiltered, and unsterilized — the kind of stuff that your mom probably would have forbidden you from drinking as a child. On Friday, however, The New York Times reported that a growing number of West Coast residents have begun drinking water delivered straight from the ground out of a wariness for the chemicals found in the public water supply.

Governments have tried to decontaminate their drinking water for thousands of years, and they have come up with plenty of methods over the years. These days, the steps for treating the public supply include filtration and disinfection to remove pathogens and sediment, followed by fluoridation. According to the Centers for Disease Control (CDC), these processes help prevent the spread of waterborne germs like Cryptosporidium, E. coli, Hepatitis A, and Giardia intestinalis. As for the addition of fluorine, the CDC writes that it prevents tooth decay "safely and effectively," and decades of research have backed this up.

Proponents of raw water, though, believe that these processes can remove healthful minerals and bacteria while adding potentially harmful chemicals — like, say, fluoride. Given the lead poisoning of children in Flint, Michigan, as well as the more recent news that the lead in Portland's water supply exceeds federal limits, they also may distrust the lead pipes tap water is sometimes passed through on its way to the sink, which can expose drinkers to the chemical.

All this set the stage for the sale of untreated water, which several companies out West have begun to offer.

One of the most prominent is Live Water, which sells 2.5 gallon glass jugs of spring water taken from Opal Spring in Madras, Oregon. (According to the Times article, a single jug cost $36.99 at a San Francisco cooperative. Refills were $14.99.) Similarly, Tourmaline Spring in Maine offers bottles of water taken from — you guessed it — Tourmaline Spring, which can be found near the summit of the highest point in Cumerland County, Maine.

In theory, drinking water straight from a pristine spring in the wilderness sounds like a great idea. In practice, that spring might not be as pristine as you would hope. It might look sparkly and clear, but as the CDC points out, it can be full of unseen bacteria from human and animal poop. As a result, it recommends boiling stream and river water for at least one minute. If it's not safe to drink directly from a stream, is that the kind of water you want to drink out of a bottle without boiling it first?

Even private systems like wells and rainwater collection can be dangerous when chemicals like nitrate seep into the groundwater supply. Because the Environmental Protection Agency's rules for public water systems don't apply to wells on private property, the CDC recommends testing your well regularly for signs of contamination.

In short, there's a reason public water is treated. To be fair, it can terribly wrong, as demonstrated by the Flint drinking water scandal and the 2016 report suggesting that some water supplies are contaminated with industrial chemicals. However, water from off the grid is likely to contain dangerous pathogens, which doesn't seem like a much healthier alternative. It's up to you to decide what you drink, but I would say the best solution is better water contamination testing, not sourcing your water from the same river a bear uses as a bathroom.