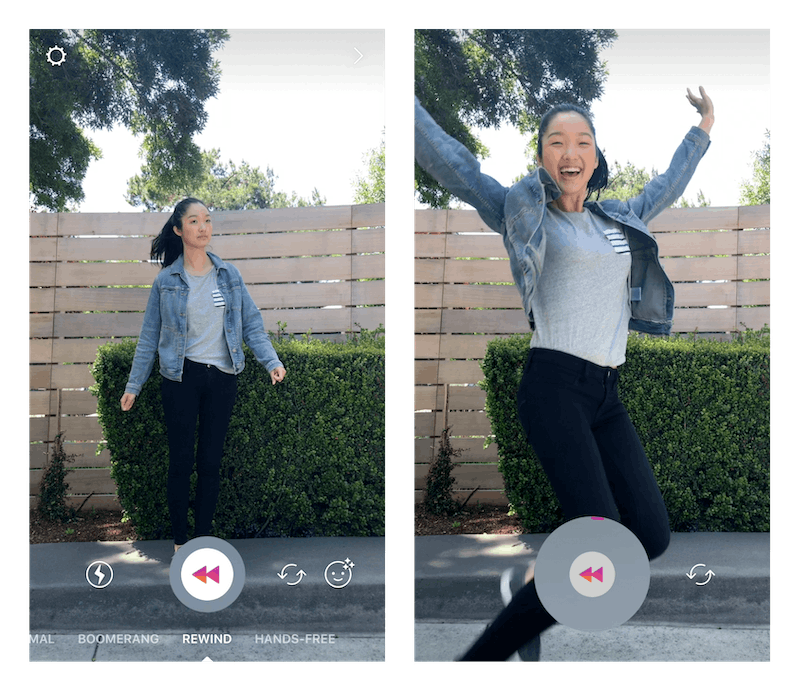 The new tool is appropriately called "Rewind" and you can find it in the same place where you'd choose "Boomerang" or "Hands Free" or "Live". The tool is just another trick to add to your camera bag to make your content look a little bit more unique and stylized.

If you've ever see a video play backwards before, you know it's a super cool trick. It gives you an opportunity to play with your Instagram Stories and make use them as a creative outlet. And if you really love what you've made, you can save it and pin it to your permanent profile. This updates is available as part of Instagram version 10.21 for iOS in the Apple App Store and for Android in Google Play, so if you haven't already, check your phone for an update opportunity, you're going to want to start fooling around with all the new features ASAP. If you've got the update and need some inspiration, these are a few things you might want to consider filming, for ultimate rewind magic.

Pour a cup of water over your head while filming yourself. When you play it in rewind and the water droplets roll up your face, it will look freakin' awesome.

Make your morning breakfast content look a lot more interesting. Film the messy break of an egg in Rewind mode and watch it come back together.

Got a lot of laundry? Have someone film you throwing it all around your room, making as big of a mess as possible. Then, with movie magic, reverse it and watch your room clean itself up.

Film yourself writing a message and then covering it up in scribbles or paint. When it's played in reverse, the secret message will reveal itself in a dramatic way.

Instead of doing a basic makeup tutorial, film your routine in Rewind and let the movie magic wash your face for you.

Film yourself making an epic cocktail with tons of ingredients and then share it with Rewind.

Pop some popcorn in the microwave and film it in Rewind through the door.

Clean Up Your Make Up

After you've put on a full face of makeup, put some remover on a cotton swap and loosen it all up, doing your best raccoon eye. Film it in Rewind and it will neaten itself up!