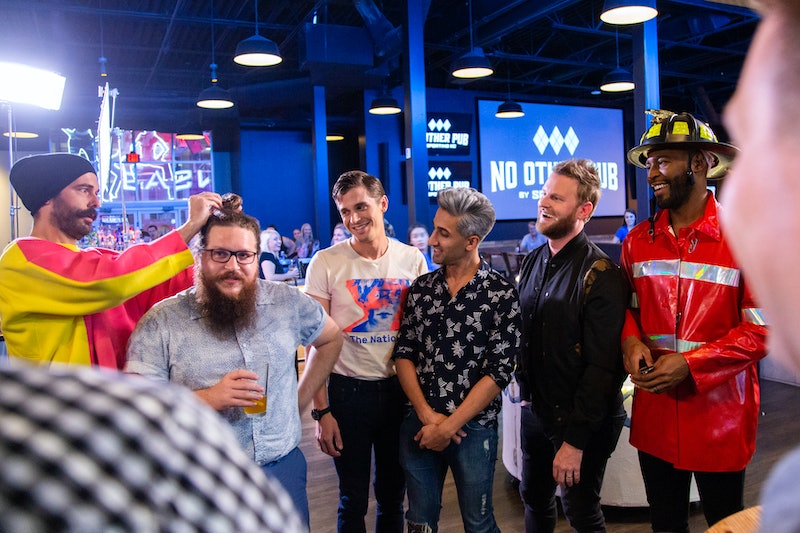 In Episode 4 of Queer Eye's newly debuted third season, the Fab Five meet Robert Hitchcock, a 34-year-old psychiatric nurse. He's been putting himself down for years, shrugging it off as self-deprecation, and the guys' mission is to help him learn to love himself and feel confident on his wedding day. He makes a lot of progress throughout the episode, and where Robert is now seems to confirm Queer Eye succeeded in giving him the shift in perspective he needed.

As Robert's fiancee, Jamie, explains, she and his groomsmen nominated him because they wanted him to feel special on his big day. "The thing that attracted me to Robert was his personality," she says. "He's so outgoing, and just a fabulous father. I nominated Robert because this week is the wedding, and I want it to be about him, too." The catch-up video showing how happy he was during his wedding — not just about getting married, but because he finally seemed comfortable with himself — is a testament to how far he came in just one week, and it seems like things have only gotten better from there.

"Feeling amazing right now....I can't wait to see all my fellow [heroes] in action. March 15 is going to be awesome!" Robert tweeted earlier this month. He only made his Twitter account March 5, but his Instagram reveals a little bit more about what he's been up to since filming wrapped. In his bio, Robert describes himself as a "husband to an amazing woman" and the "father of three beautiful kids," so from the sounds of things, his life now is still happy and full of love.

According to Robert and Jamie's wedding website, they got married on September 15, 2018 in Kansas City, and he's since shared some beautiful photos from their wedding. "Our wedding was one of the most beautiful things I've ever been part of. Great memories," he captioned a few snapshots on Instagram.

The rest of Robert's feed is filled with pictures and videos of his kids, as well as a couple mouthwatering food photos, so he's apparently still killing it in the kitchen. And it looks like he's also started getting to know some of his co-stars. According to his Instagram, Robert decided to head to Jones Bar-B-Q, the Kansas City restaurant owned by sisters Deborah and Mary, who are also Season 3 cast members. Unfortunately, he apparently got there too late to snag some of their signature ribs, and didn't have time to meet Mary either. But according to his Instagram post, he's already planning a return visit.

"I only got to meet Deborah. Only for a short second. They were busy. Will for sure try to go back to get the ribs," he wrote.

Also, as evidenced from these pics at Jones Bar-B-W, Robert is still rocking the hunter green shacket Tan helped him pick out, along with well-fitting skinny jeans and some crisp white sneakers. From the giant smile on his face, you can tell that the Fab Five have helped him making lasting improvements in his life, both inside and out.