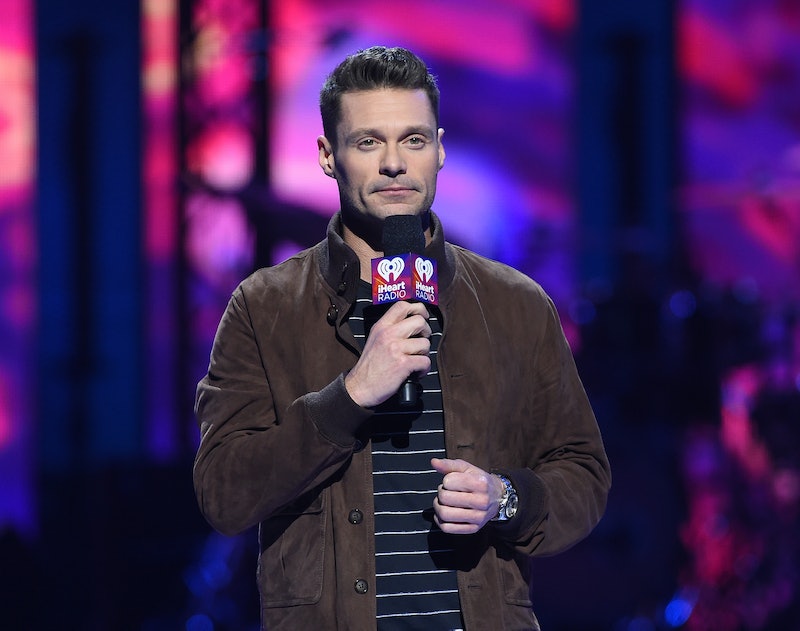 On Monday morning, news broke that Kelly Ripa has picked Ryan Seacrest as her new Live co-host, finally filling Michael Strahan's long-vacant post after his abrupt departure in April 2016. It's a fitting choice: Seacrest has a decorated resume, and, throughout his two-decade tenure in the industry, his name has become practically synonymous with hosting. But his lengthy array of on and off-air gigs also means he's high in demand, and you may be wondering: what Ryan Seacrest's Live salary is?

Thus far, there has been no official confirmation on Seacrest's price tag, but there are a few good guesses to be made. (Bustle reached out to both Live and Seacrest's representatives for comment, but did not receive a response at the time of publication.) As of October 2016, Forbes pegged Ripa's Live salary at an estimated $17 million. According to The Hollywood Reporter, that's allegedly slightly more than Seacrest's reported $15 million salary during his 14-year hosting gig on American Idol.

And it's higher than some of his earnings for other ventures, too. In 2015, Billboard valued his three-year deal with iHeartMedia — which includes On Air with Ryan Seacrest and American Top 40 with Ryan Seacrest — at a reported $25 million or more, which boils down to at least $8.3 million per year. He also serves as an executive producer for the Kardashian-Jenner family's stable of reality series, a host and executive producer for Dick Clark's New Years Rockin' Eve, and a host for E!'s Live From the Red Carpet. The terms for those contracts remain unclear, though Forbes estimates Seacrest's annual salary at an alleged $55 million.

So, if Seacrest's Live salary matches his new co-host's alleged one, it's actually a step up for the veteran entertainer — at least in comparison to what numbers have been estimated.

Of course, it's a well-deserved win regardless of the true cost, but a bolstered income would certainly sweeten the deal to me.

More like this
Gemma Collins' Net Worth Is Only Going Up
By Catharina Cheung
'RHOBH' Star Diana Jenkins’ Fiancé Asher Monroe Once Shared A Stage With Kelly Clarkson
By Brad Witter
What Is Brad Pitt’s Net Worth? The Bullet Train Star Now Makes 8 Figures Per Film
By Hugh McIntyre
What Is Beyoncé's Net Worth? The 'Renaissance' Hitmaker Makes 9 Figures On Tours
By Radhika Menon
Get Even More From Bustle — Sign Up For The Newsletter