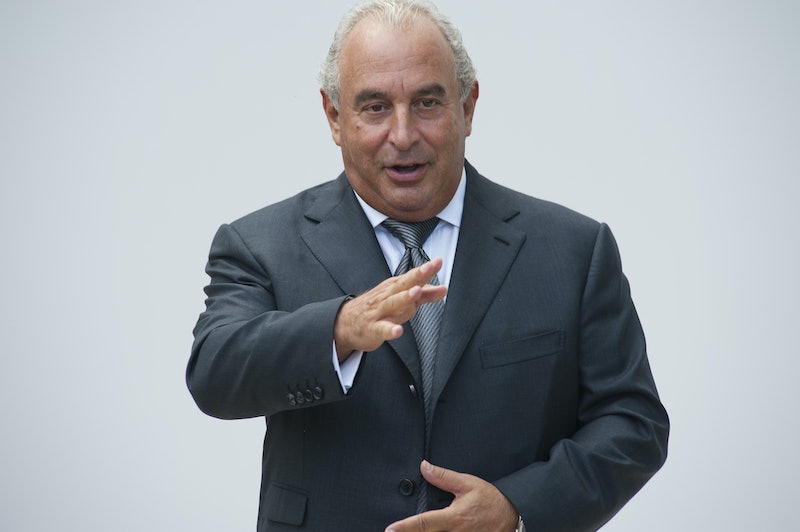 Last week Topshop chairman Sir Philip Green was named in the House of Lords as the businessman behind an injunction taken out against the Telegraph newspaper to prevent the publication of accusations of sexual harassment and racial abuse. On Thursday Labour peer Lord Peter Hain used parliamentary privilege to name the businessman in the House of Lords. In a statement, Green "categorically and wholly" denied "unlawful sexual or racist behaviour." Bustle has reached out to a representative of the Arcadia Group chairman for further comment.

Over the weekend Green spoke to the Mail on Sunday describing the week in which the allegations broke as the "worst" of his life. He reiterated his denials of both sexual harassment and racial abuse, stating: "I'm very, very, very upset. I'm being used as target practice when there is zero [evidence] that anyone has turned up with. It's injuring my business, all the people potentially working in the business, and it's injuring me and my family."

Green told the publication that he feels he is guilty of nothing more than engaging in "banter" with his staff members.

"I've been in business for more than 40 years. There has obviously from time to time been some banter, but as far as I'm concerned that's never been offensive," Green said. "I've got a good relationship with all my staff. In all that time, until the recent issues, I've not had one litigation or complaint."

He continued, "If anything I've said has caused offence, I'm happy to apologise. Nothing I've said was ever meant to be offensive. Many people have worked for the family for many years and I've never had any problems."

What Does The Telegraph Article Allege?

Last week, the Telegraph newspaper published a story which alleged a well-known UK businessman was at the centre of a "#MeToo scandal" that they had been investigating for eight months. The publication claimed that the man in question used several non disclosure agreements to prevent his alleged victims from making their experiences public. Due to the nature of the temporary injunction — a court order that makes it illegal for the businessman's identity to be revealed — the paper cannot yet confirm whether Green is in fact the subject of their claims.

The story was framed by the Telegraph as "the British #MeToo scandal" given the prominence of Green's position in public life and the nature of the allegations. The report has also raised questions around non-disclosure agreements, with a Financial Times editorial arguing that "in cases of serial abuse, silence does not serve the public interest."

Green has denied all accusations, and his full statement issued in Thursday 25 October read:

"I am not commenting on anything that has happened in court or was said in Parliament today. To the extent that it is suggested that I have been guilty of unlawful sexual or racist behaviour, I categorically and wholly deny these allegations. Arcadia and I take accusations and grievances from employees very seriously and in the event that one is raised, it is thoroughly investigated. Arcadia employs more than 20,000 people and in common with many large businesses sometimes receives formal complaints from employees. In some cases these are settled with the agreement of all parties and their legal advisers. These settlements are confidential so I cannot comment further on them."

Why Did Peter Hain Decide To Name Green?

Lord Hain has said he was given Green's name by someone "intimately involved in the case." The former Labour MP told Newsnight that he decided to name the businessman due to the "serious and repeated" nature of the alleged offences, the BBC reports. MPs and members of the House of Lords are able to name the subjects of injunctions due to parliamentary privilege, which gives serving politicians legal protection from litigation regarding any comments they make in Parliament.

Lord Hain said, "I considered it extremely seriously before I said it. I'm not disputing judges' responsibilities or timing or anything like that. That's a matter for the judiciary. I'm just charging my function as a parliamentarian — and what concerned me about this case was wealth, and power that comes with it, and abuse and that was what led me to act in the way that I did."

How Was Lord Hain's Decision Received?

There has been debate over whether Lord Hain made the right decision in naming Green. Some commentators believe the action was in the public interest due to the criminal nature of the Telegraph's accusations and questions over the use of NDAs in such cases. Others believe that Hain should have allowed the legal proceedings to take their course, The Independent reports. As the BBC reports, he was particularly criticised by former Attorney General Dominic Grieve, who added, "We can't operate a democratic free society when peers or MPs decide to take the law into their own hands."

On Thursday night after Green was named, the hashtag #PinkNotGreen began trending on Twitter, the Daily Mail reports, with users calling for a boycott of high street brand Topshop. Green is chairman of the Arcadia Group which owns the chain and other retailers including Dorothy Perkins and Miss Selfridge. The hashtag was originally created when Topshop attracted criticism for taking down a pop-up stand in their Oxford Street store which was promoting the release of the feminist book Feminists Don't Wear Pink, The Independent reports.

In a statement given to the Evening Standard at the time, Topshop apologised for dismantling the pop-up. "Yesterday we made the decision from a production and creative standpoint to retract the Feminists Don't Wear Pink (And Other Lies) pop-up from one of our stores," the statement read. "We are sorry — this in no way reflects our stance on feminism and we will be making a donation of £25,000 to Girl Up. We continue to fully support the sentiment of the book, Scarlett Curtis, feminism and equality."

Aside from the businessman's assertions in the Mail on Sunday that the allegations have impacted his businesses, separately there have also been calls from MPs, and members of the public to strip him of his knighthood which he was given in 2006, the Evening Standard reports. "Getting a knighthood from the Queen is supposed to be an honour but he seems to have behaved, both in the case of the BHS pensioners and now with the use of NDAs [non-disclosure agreements] to silence accusers, in quite a disreputable way. I think he should lose his knighthood," shadow Home Secretary Diane Abbott commented.

As the Guardian reports, the Prime Minister's office commented that the forfeiture committee was "constantly reviewing evidence in relation to matters like this." Number 10 added that Theresa May had previously affirmed, "bullying and sexual harassment in the workplace is against the law and that kind of behaviour can’t be tolerated."

As for the legal repercussions, the Telegraph reports that its lawyers have written to the lawyers of Philip Green inviting him to drop the injunction which prevents them from naming the businessman accused of sexual harassment and racial abuse. As Green denies the allegations, it would seem unlikely that he will.

In which case, the letter states, “If your clients do not agree our clients will pursue this matter to trial as quickly as possible," meaning the Telegraph will pursue their legal challenge against the injunction. If successful they will be able to name the businessman in question and publish any further information they may have relating to allegations, if unsuccessful the injunction will still stand. Barrister Jolyon Maugham of the Good Law Project, explained, "I imagine they [the Telegraph] also have further information that they want to put into the public domain."

As for any consequences Green may face for the alleged sexual harassment and racial abuse, according to Maugham this would depend on further alleged victims coming forward, as the claims in the Telegraph article relate to individuals who have previously signed nondisclosure agreements.

"The real impact of Philip Green being named is likely to be to embolden others who believe his conduct crossed a line to come forward, in a way that we have seen happen with such figures as Harvey Weinstein," Maugham explains. "The five individuals mentioned in the judgment appear already to have settled their disputes with him."

In other words — watch this space.

More like this
Watch Jacinda Arden’s Devastatingly Honest Resignation Speech
By Sam Ramsden
Pret & Costa’s Coffee Is The Strongest On The High Street, According To Which?
By Sam Ramsden
This Is When Netflix Is Going To Start Charging You For Sharing Passwords
By Darshita Goyal
Rita Ora Finally Opened Up About Marrying Taika Waititi & Their "Perfect" Wedding
By Sophie McEvoy and Catharina Cheung
Get The Very Best Of Bustle/UK
Sign up for Bustle UK's twice-weekly newsletter, featuring the latest must-watch TV, moving personal stories, and expert advice on the hottest viral buys.