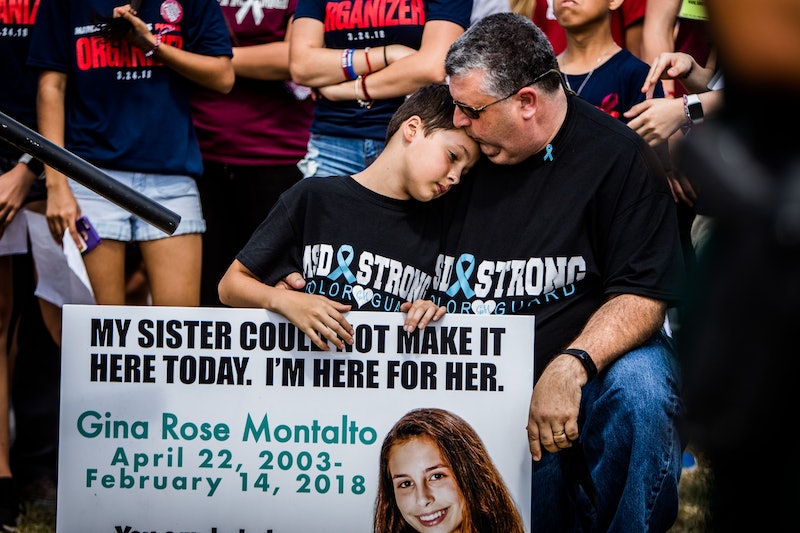 In the months since 14 students and three school employees died in a school shooting in Parkland, Florida, gun control has been at the center of the national conversation. Now the parents and partners of the victims are making that conversation their own, launching Stand With Parkland, the newest nonprofit group that's lobbying for school safety and sensible gun laws.

Although there have already been several funds and campaigns set up to help Parkland families and students such as the Stoneman Douglas Victims' Fund, this new endeavor is run by those who were most affected — the parents of 13 of the 14 student victims and family members of all three school staff members.

Member April Schentrup, the mother of Parkland victim Carmen Schentrup, who was 16 when she was killed, tweeted about the nonprofit’s launch on Thursday. She noted that the advocacy group plans to focus on school safety enhancements, mental health screening and support systems, and responsibly firearm ownership.

According to Stand With Parkland, the group’s ultimate aim is to make positive change so that students can feel safe at school and other families don’t have to experience the loss of their loved ones in such a tragedy.

The launch comes about five months after the Valentine’s Day shooting at Stoneman Douglas High School in Parkland, which is northwest of Fort Lauderdale. After the shooting, many of the victims’ peers took the national stage and a stance against gun violence. Thousands donated money, made signs, and took part in March for Our Lives rallies across the country. Students such as David Hogg and Emma González became media sensations and advocates for stricter gun laws.

While this outpouring of goodwill toward Parkland had momentum, other issues such as immigration have taken the spotlight over the last month. But just when you thought the school safety movement was fading from your radar, the Parkland families came back to tap you on the shoulder and say “we’re not done here yet” with this nonprofit’s launch.

"The Parkland families are inspired by the love and support of millions of people who have reached out to us, the courageousness of the surviving students who have spoken out, and the millions who have marched," a statement on the Stand With Parkland website reads.

"As the families who have suffered the loss of a loved one in this tragedy, we are banding together to do something about violence in our schools so that no other families have to experience the pain that we have had to endure."

One member of the group, Tony Montalto, father of 14-year-old Parkland victim Gina Montalto, told Rolling Stone that Stand With Parkland will be bipartisan. Although Democrats have traditionally been more supportive of gun control, with Republicans fighting tooth and nail to protect the Second Amendment, Montalto said this is about safety, not guns.

"The only way to make this work, in our opinion, is to respect everybody, to listen to everybody, to be inclusive rather than divisive," Montalto told Rolling Stone. "Hopefully, we can do that. And by talking to both sides – Democrats, Republicans, conservatives, liberals, whatever – we'll find that compromise that makes people safer."

This may be true, but the nonprofit’s launch garnered a response from the National Rifle Association. Chris W. Cox, director of the NRA’s Institute for Legislative Action, acknowledged in a statement to NBC News that many Parkland families were putting school safety ahead of politics, but argued to NBC that “making it more difficult for law-abiding adults to exercise their constitutional right to self-defense will not improve public safety." Bustle reached out to the NRA for further comment.

Stand With Parkland is accepting donations from supporters, and it is classified as a 501(c)4 organization, which means that it can lobby and back political candidates with funding and messaging.

And If anyone understands how vexed and complicated the issues of school safety and gun laws are, it's Parkland parents. But here's hoping the three-pronged plan of their nonprofit can make it a little more simple — and a lot more safe.

"We understand this is a complex problem," Stand With Parkland tweeted. "And addressing it in a real and impactful way demands a holistic approach that addresses the triad of school safety, including school safety enhancements, mental health screening and support programs, and responsible firearms ownership."