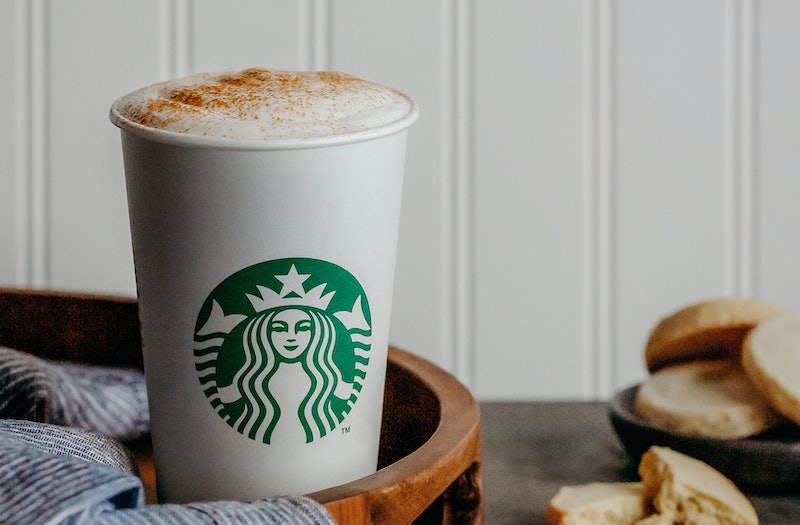 Starbucks is trying to make the PSL happen all over again — but, this time, it's a lot more cinnamon-y. On Tuesday, Starbucks introduced their new Cinnamon Shortbread Latté, or, in acronym form, the "CSL." According to the company, "if you have a thing for cookie butter," then this one's for you.

While it's easy to picture the cinnamon part, it's hard to imagine what a shortbread-flavored coffee drink would be like without thinking about a drink filled with cookie crumbs. But, according to Starbucks, the Cinnamon Shortbread Latté "combines espresso with milk and notes of brown butter and vanilla, topped off with cinnamon and nutmeg." Ah, brown butter and vanilla, there's the shortbread part. No soggy cookies involved, thankfully.

The CSL — which Starbucks is hoping could be the winter version of the PSL (it is full of spices...) — can be ordered hot, iced, or as a Frappuccino. Starbucks also notes that it can be customized, and that doesn't just include your milk choice — it also includes your espresso choice. The drink can be made with the chain's Signature Espresso, which it describes as "bold and intense", but it can also be made with the Blonde Espresso, which is "smoother and subtly sweeter."

The Cinnamon Shortbread Latte hits stores in the U.S. and Canada on Jan. 8. Unfortunately, as with most good things, it can't last forever — the drink will only be available for a limited time, while supplies last.

This is not the first time Starbucks has tried out a shortbread latté, and it's certainly not their first cinnamon-flavored drink. Starbucks previously had a holiday drink called the Brown Sugar Shortbread Latté, but, judging by this Twitter exchange between the brand and a customer, it was only available in select cities. The drink is still listed on the Starbucks site, though, with the description: "Our rich espresso and steamed milk are combined with traditional shortbread cookie flavors then topped with whipped cream and crunchy shortbread sugar topping."

In other drinks that sound like they have dessert crumbs in them, the coffee company also does a Gingerbread Latté during the holiday season: "Sweet and delicately spicy gingerbread flavors mingle with our classic espresso and steamed milk and are topped with whipped cream and ground nutmeg for the perfect holiday touch."

It would be surprising if the CSL catches on as much as the PSL, because that's a venti-sized cup to fill. Then again, no one could have predicted the Pumpkin Spice Latté would become such a thing, either — it was invented when Starbucks flavor developers ate pumpkin pie while drinking espresso to see what about the pie flavors complimented the espresso.

Anyway, "pumpkin spice" sounds about as odd as "cinnamon shortbread" as far as coffee flavors go. Maybe next year the CSL will define winter coffee ordering.