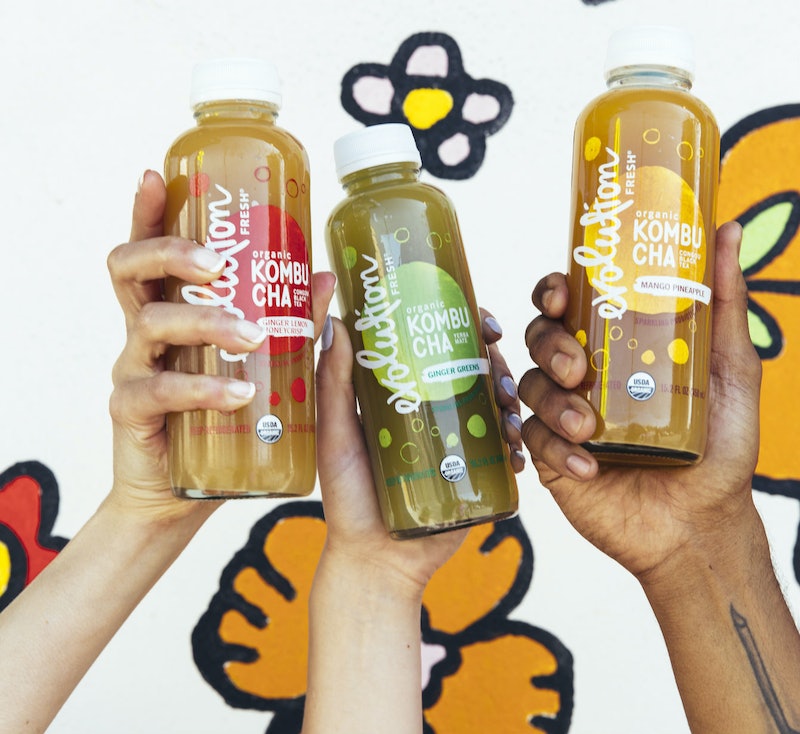 At this point, you've almost definitely heard of kombucha, a drink that has been super trendy in the health food world for a while now. The mixture of fermented tea is said to have health benefits that include improved digestion, less stress, and more energy. Once only relegated to health food shops, kombucha has grown in popularity so much that it's now available pretty much everywhere by a whole bunch of different brands. And starting Aug. 8, Starbucks' Evolution Fresh line is selling a variety of flavors of kombucha. Before you buy one to test out, however, you might be wondering exactly what Starbucks' Evolution Fresh Kombucha is.

First, the basics: kombucha is a tea-based drink that has been around for thousands of years — actually, it dates back to ancient Chinese civilizations, when it was used as a remedy for things like arthritis and even cancer. So it's not just a brand new trend, even if it seems that way. The drink is a combination of tea, sugar, and active starter culture of bacteria and yeast. This culture is known as the "mother culture" (or just, sort of ominously, "the mother"), and it's combined with black or green tea for a fermentation process while bacteria grows.

This might sound horrifying, but don't freak out: this is the good kind of bacteria, the kind some doctors say can improve gut health and ward off the bad bacteria that can actually make you sick. This good bacteria is known as probiotics, and some experts believe it can do everything from alleviate issues associated with irritable bowel syndrome and food allergies to fight colds and lower cholesterol.

Because of the fermentation process, kombucha tends to have a sour, vinegar-like taste to it that many find off-putting. This is why companies often give it a sweet flavor with the addition of fruits and spices. That's exactly what Starbucks' Evolution Fresh line did: there are six different flavors of their kombucha, and all of them sound pretty great.

Which brings us back to the main point: what are the new Evolution Fresh Organic Kombucha drinks? This bottled kombucha is artisanal tea that is fermented and paired with cold-pressed Evolution Fresh juices. It's certified USDA Organic, non-GMO, gluten-free, and kosher, and the six different flavors sound pretty great.