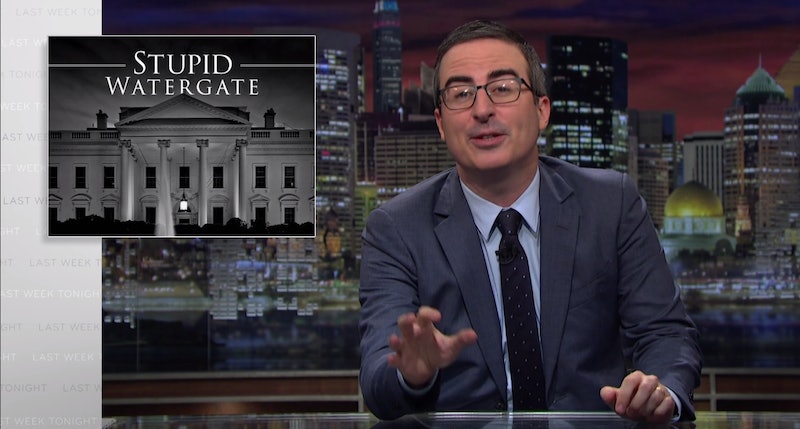 'Last Week Tonight with John Oliver'/HBO
By Sarah Friedmann
May 22, 2017

On Sunday's episode of Last Week Tonight, John Oliver reflected on the week's many controversies surrounding the Trump administration in a longer version of a continuing show segment called "stupid Watergate." In light of the night's show, many are likely wondering what specifically Oliver means by "stupid Watergate" and how he has used the phrase as a metaphor to describe the Trump administration.

Oliver first coined the phrase "stupid Watergate" during an episode of Last Week Tonight in early March in which he was describing the alleged Trump-Russia scandal. According to Oliver, the notion of "stupid Watergate" describes the alleged Russia-related controversies of the Trump administration because they amount to "a potential scandal with all the intrigue of Watergate [the Nixon administration scandal that ultimately led to President Nixon's resignation], except everyone involved is really bad at everything."

Since the first time he coined the phrase, Oliver has dedicated short segments on several subsequent shows to providing audiences with updates on "stupid Watergate" — a.k.a. updates on the potential ties between Trump's campaign and Russia and the myriad of actors who are, in some way, associated with the controversy. Trump has called the probe a "witch hunt," denying any collusion with Russia.

On Sunday's episode, instead of merely dedicating a short segment to "stupid Watergate" updates, Oliver actually dedicated nearly his entire show to the matter. His decision likely stemmed from the fact that the past week has been rife with controversy related to the Trump administration and its alleged ties to Russia. Again, Trump has denied those ties.

First, last week it emerged that Trump allegedly shared highly classified information with Russian officials that put the information source at risk, something the Trump administration has denied. Trump himself responded to the allegations by tweeting that he has a right to discuss terrorist threats with other nations. Secondly, news also came out that Trump allegedly asked former FBI Director James Comey to shut down the investigation into former National Security Advisor Michael Flynn back in February. The Trump administration has also denied these allegations, though the controversy has caused some members of Congress to call for Trump's impeachment.

Thus, as a result of the extensive amount of information related to the Trump-Russia controversy that emerged over the past week, Oliver dedicated last night's entire show to reflecting on these issues and organized the show around four main questions: "What the f*ck is going on?"; "How big a deal is this?"; "Where do we go from here?"; and, "Is this real life?" Oliver's show provided a humorous, insightful, and sobering discussion of the developments of the past week and is certainly worth a watch as a way of quickly and comprehensively staying up-to-date on the latest Trump-Russia news.

It is somewhat disheartening that a presidential administration has engendered so much controversy related to its alleged ties with Russia that Oliver has coined a new phrase to describe it. However, it is also certainly helpful to have Oliver's thoughtful analysis when it comes to digesting the onslaught of information related to this issue.