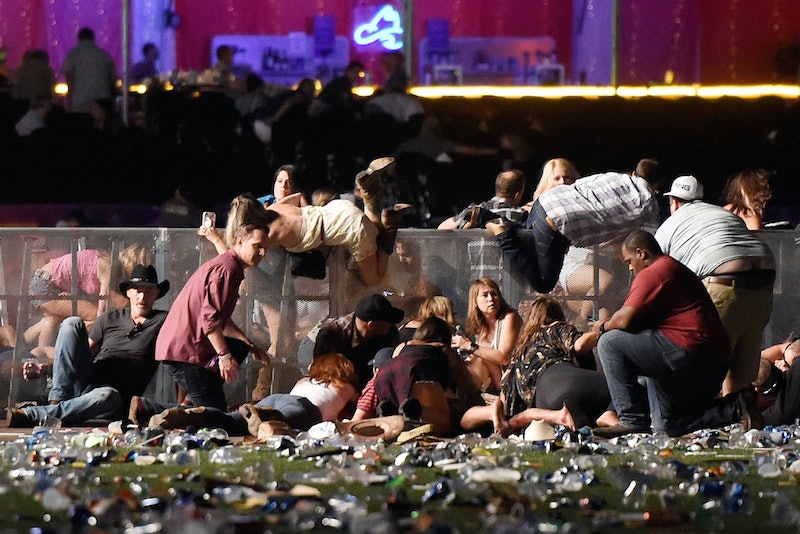 In the words of Donald Trump, it was an "act of pure evil." But was the Las Vegas mass shooting terrorism? To answer that question, it's important to decide what the definition of terrorism is. After all, the president wasn't the only authority avoiding using the word in the wake of a shooting at a Route 91 Harvest Festival in Las Vegas in the early hours of Oct. 2, which led to over 50 people losing their lives and over 400 people being sent to the hospital with various injuries. According to The Independent, when Las Vegas Sheriff Joseph Lombardo was asked if he believed the shooting was a terrorist act, he told reporters, "No, not at this point. We believe it was a local individual. He resides here locally."

According to GQ, the Clark County Sheriff further elaborated on the question by saying, "We don’t know what his belief system was at this time," possibly implying that the shooter being white and American decreased the possibility of the "terrorism" designation being applied. However, according to Nevada law, terrorism is "any act that involves the use or attempted use of sabotage, coercion or violence" which is intended to, amongst other definitions, "cause great bodily harm or death to the general population."

As such, given the shooter's intent to hurt a vast number of people, according to Nevada law, the Route 91 Harvest Festival attack should meet those qualifications. But, of course, there isn't simply one universally accepted definition of terrorism.

According to ABC News, a State Department report on world terrorism in 2000 stated that "no one definition of terrorism has gained universal acceptance" and ABC News has emphasized that, among different federal government agencies in the U.S., different definitions are used.

For example, according to the State Department, terrorism is all about the politics behind an action. It is defined in Title 22 Chapter 38 U.S. Code § 2656f as "premeditated, politically motivated violence perpetrated against noncombatant targets by subnational groups or clandestine agents." Since, according to The Telegraph, authorities do not yet know the Las Vegas shooter's motives for the attack, and he has no known connections to terrorist organizations or militant groups, it would be difficult to argue that the shooting was "politically motivated violence," even though it may have been premeditated. As such, it may have been this definition that Lombardo was operating under when he brought up the shooter's "belief system."

However, the United States' Federal Criminal Code defines domestic terrorism more broadly as "acts dangerous to human life that are a violation of the criminal laws of the United States or of any State," which appear to be intended to "intimidate or coerce a civilian population" or "to influence the policy of a government by intimidation or coercion" or "to affect the conduct of a government by mass destruction, assassination, or kidnapping."

Given the fear the shooter inspired even after the attack, with the surrounding area going on lockdown, residents and visitors checking in on Facebook to mark themselves as "safe" for friends and family, and The New York Post reporting stocks in Las Vegas casino operators falling as much as five percent following the attacks, it seems pretty clear that this definition applies to the attack.

Of course, when multiple definitions of terrorism exist, people often rely on the way they've seen the word used in the media. As American human rights lawyer and writer Arsalan Iftikhar put it in an interview with nonprofit organization Truthout, terrorism is often only used to describe crimes committed "by olive-skinned Muslim men." In 2015, there were 300 mass shootings in the United States and less than one percent of these shootings were committed by Muslims, but Iftikhar claimed that "it was the one committed by Muslims in San Bernardino that was immediately labeled an act of 'terrorism.'"

So, no matter which definition of terrorism you hold to be true, it's important to make sure that it is never a tool of racial profiling or oppression. The conversation is sure to continue as more information about the Las Vegas shooting comes to light.