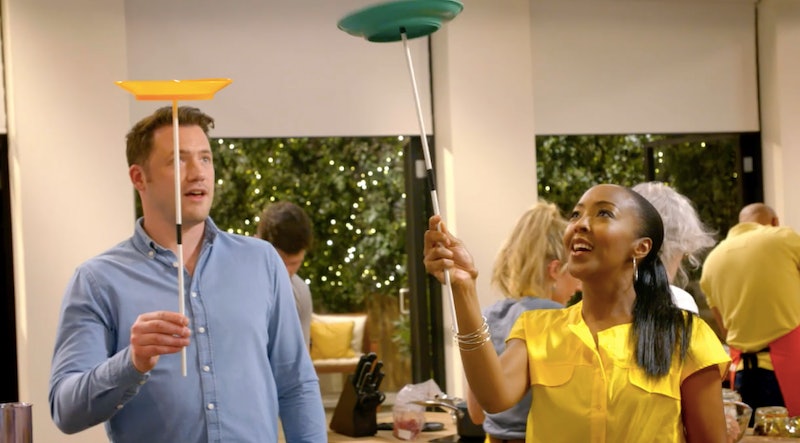 Many winners of reality competition shows walk away with an impressive grand prize. On Survivor, it's $1 million, on American Idol, it's $250,000 and a record deal, on The Bachelor it's usually a blingy diamond engagement ring and tons of endorsements. Surprisingly, compared to those grandiose winnings, The Big Family Cooking Showdown's grand prize is underwhelming, to say the least.

The BBC Two program that made its way to Netflix is often referred to as a cooking version of the beloved and charming British reality competition show, Great British Bake Off. Unfortunately, their grand prizes are comparable, too. According to Metro, the winners of GBBO win a cake stand and, if they're lucky, maybe a bouquet of flowers. And by the looks of the BFCS Season 1 finale, its version of that prize is an artfully carved wooden cutting board. Season 2 of BFCS drops on Netflix on Feb. 22.

No other winnings have been reported since the Gangotra family won Season 1, but some would say what they didn't win in material things or cash, they won in exposure and publicity. That was definitely the case for Season 6 GBBO winner Nadiya Hussain, who actually hosted the first season of BFCS. She won't be hosting Season 2 because she's moving on to bigger and better things — her own cooking show. So, indirectly, by by winning GBBO, she won the fame that led her to book her own program.

It's unclear whether the Gangotra family's BFCS victory will have the same shining effect, but Lorna Nanda Gangotra, one-third of the winning family, told Essential Surrey & SW London that she has definitely stayed busy since appearing on the show.

“It was very intense,” she said. “It took up a whole year of our lives. We practiced, practiced, practiced. But it was worth it. Apart from winning, we also got a valuable insight into how things work behind the scenes, which I found very interesting.” She and her family have also gained exposure from the show, especially since it came to Netflix. However, according to the Essential Survey, it hasn't grabbed quite the number of viewers its baking counterpart did.

“I now have a wider audience taking an interest in what I’m doing,” Lorna said. “I still have my local stalls and I run bespoke cookery classes, but I also have some supper clubs and pop-ups planned. It’s very exciting.” The family also made great friends with their fellow contestants, which may be the best prize of all.

The show's production made a lot of changes between seasons one and two, though, so it could surprise viewers by redeeming its unassuming crown. There will be a pair of new dual host-judges, British TV presenter and Celebrity Masterchef winner Angellica Bell and Michelin starred chef Tommy Banks, per BBC, and there will be 14 episodes in Season 2 as opposed to the 12 that made up Season 1. Perhaps there was a budget increase that allowed for two more episodes, and potentially, a bigger grand prize. If not, there will (hopefully) at least be a really nice cutting board.

More like this
Laura Tott From 'First Dates' Married Her Long-Term Mystery Boyfriend
By Darshita Goyal
Move Over, 'Sunset'! The Drama-Filled Trailer For 'Selling The OC' Is Here
By Nola Ojomu
This 'Bridgerton' Polin x 'Love Island' Crossover Is Everything
By Darshita Goyal
The Love Island 2022 Reunion Drama, Explained
By Sophie McEvoy
Get Even More From Bustle — Sign Up For The Newsletter