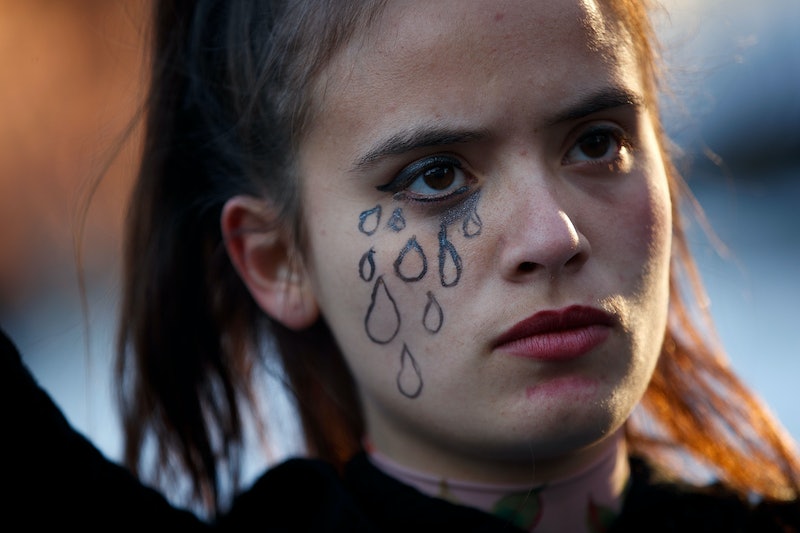 American women have 99 problems on their minds these days, any given day of the week. How is it even possible to choose the one that comes out on top, when you're accosted daily with news of potential nuclear war, years of sexual harassment cover-ups, and bickering among the very people in the country who are charged with keeping the nation safe? But when you really delve into it, the single most pressing issue facing American women today is the one that underlies everything. The issue that is, sometimes on a day-to-day basis, very literally a matter of life and death. And while it may seem like an issue that can be compartmentalized and only discussed in certain situations, it actually pervades everything else, especially for the nation's most vulnerable individuals. It's health care.

You've been hearing a lot about the Trump administration's attack on women's rights, particularly reproductive rights, and reasonably so. The administration, and fellow Republicans in the legislature, advocate for health care plans that essentially punish women for the unavoidable situation of having been born female, by threatening to slash required coverage of birth control, abortions, and maternity care. The people making those decisions, a majority of whom are men, seem to not have given any thought to how things like access to contraception and abortion are actually men's issues, too.

These attacks, unfortunately, aren't only coming from the religious right, either. Progressive darling Bernie Sanders infamously maintained that abortion access was an "identity issue" that could be dismissed in favor of the economic issues that, he argued, were really more important. As colorblind as this take on the issue of reproductive rights is, it offers the perfect springboard from which to delve into how health care, for the people who lack it, is irrevocably tied to the (very real and pervasive) economic issues that Sanders is always harping on.

For women, particularly low-income women and women of color, unequal access to health care is one of the many factors perpetuating the economic gap that is perpetuating problems in the country. It's all the more difficult to give your children, for example, the support they need to succeed in school when you get pregnant unexpectedly, don't have access to an abortion, and then have another child to provide for. You can't invest in the sorts of things that would make your life more secure — property, for example — when too much of your salary goes toward the medicine that keeps sick family members alive. And with the home-oriented and caregiving tasks still falling overwhelmingly on the shoulders of women, access to comprehensive health care — including reproductive health care — is of paramount importance for America's women.

So, health care is a big problem facing millions of people in the United States, both men and women. But even during an administration that seems dead-set on taking away coverage for millions come hell or high water, there are still things that you can do to make sure that more and more Americans have the coverage that they need.

You've heard a lot about calling your congresspeople or getting in touch with them in literally any other way, and that advice still applies, even when there's not a repeal effort currently underway. But what often goes forgotten is that it's not just your representatives at the federal level that matter; representatives at the state level can also make a big difference, and they have fewer constituents to take care of, anyway. This means that if you make the effort to track down your state and local officials, they might be more receptive to your thoughts than someone at the national level, whose office may be fielding hundreds of calls a day.

When it comes down to it, though, the most important thing you can do in order to ensure health care for everyone is to get out and vote for candidates who support universal health care (or at least the next steps toward that) in every single election that you possibly can — municipal, state, and midterm elections included. Democrats historically have lower turnout during midterm elections, which are coming up in 2018 — and if this remains true for the upcoming election, that could launch Republicans into even more significant majorities in Washington and in state assemblies around the country. Look up your municipal elections, see what's going on in your state, and find a way to vote, no matter what it takes — because you can bet that Republican congressmen and the people who support them are going to do that, too.

It looks like a long road now — but this problem is absolutely solvable. There are countries all over the world where women don't have to worry about whether they'll be able to get an abortion; where they are guaranteed time off to take care of new babies; where there's no question about whether or not their birth control will be free.

There's no reason that this couldn't happen in the United States too, with continued, intense pressure on the politicians who run the country. There's no better time than now to really take on this issue — and there's no better person than you to take part in it. Live by that, and eventually the changes will come.