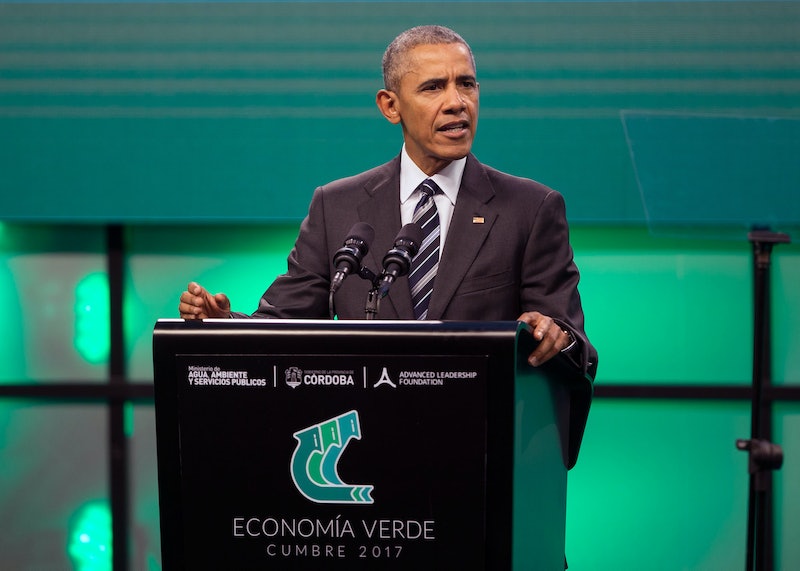 As part of the Trump administration's continued effort to wipe all of President Obama's achievements off of the legislative books, EPA head Scott Pruitt has just announced that he plans to repeal the Clean Power Plan, a huge Obama achievement in the realm of clean energy.

This doesn't come as a surprise, as President Trump had directed Pruitt to review the Clean Power Plan in an executive order in March, and he has been strikingly focused on repealing as much of Obama's legacy as possible. Environmentally focused achievements, like the Paris Climate Accords, have already fallen amongst Trump's targets on this front — although now it's unclear if he's pulling the U.S. out of that after all. Whereas the Paris Accords have to do with the whole world's commitment to addressing climate change, though, the the Clean Power Plan falls strictly within the confines of domestic policy — and now it won't be in effect any longer.

In his reasoning announcement that he would sign a new rule that would brush away the Clean Power Plan, then, Pruitt specifically referenced the coal industry. "The war on coal is over," Pruitt said in Kentucky, a state whose economy used to have a significant dependence on coal. The plan, Pruitt said, amounted to an overreach in which the EPA was effectively choosing which industries would succeed and which would fail. “The EPA and no federal agency should ever use its authority to say to you we are going to declare war on any sector of our economy," he said.

This is largely a continuation of Pruitt's stance on the Clean Power Plan from when he was Oklahoma's Attorney General and he was suing the EPA over this exact rule. When Trump nominated Pruitt to head up the administration that he was then in the process of suing, it seemed clear that the rule wouldn't stay on the books for long. "The Environmental Protection Agency has spent taxpayer dollars on an out-of-control anti-energy agenda that has destroyed millions of jobs," Trump said while nominating Pruitt, claiming that Pruitt would "reverse this trend."

Getting rid of the Clean Power Plan, then, is a very literal way of reversing the trend that the EPA had been following.