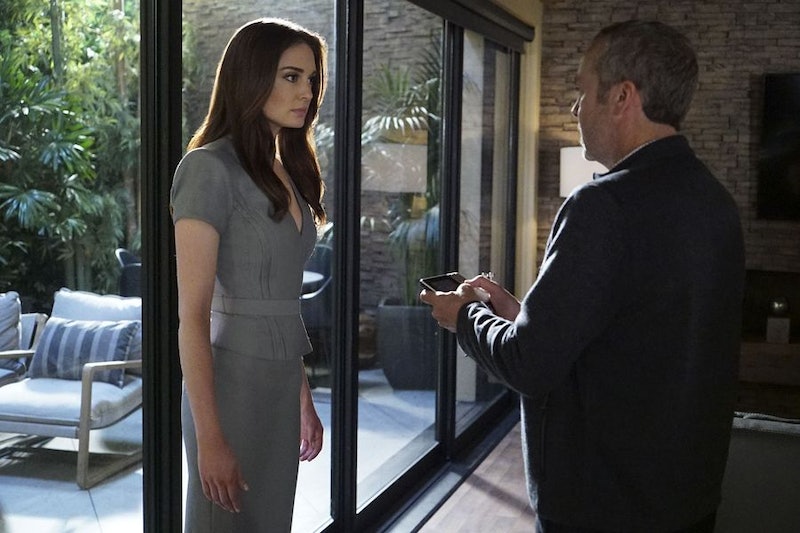 The first half of Agents of S.H.I.E.L.D. Season 4 was dark and explosive. In just eight episodes, Agents of S.H.I.E.L.D. introduced the Darkhold, Ghost Rider, and a new authority by the name of Jeffrey Mace, so it's no wonder that one of the last shots in the midseason finale was of the team relaxing and re-building relationships. But that relaxation won't last for long. When the series returns on Tuesday, the team will have more distressing things to deal with. At the end of the midseason finale, it was revealed that the Melinda May we had seen throughout most of the episode wasn't the real May, but a Life Model Decoy (LMD) seemingly engineered by Aida, the android Dr. Radcliffe created.

While "LMD" is the theme of the second half of the season, don't expect everything that happened in the first half to simply disappear. One of the things we can count on seeing more of is the Darkhold, which will continue to play an important role in the show. After using the Darkhold to free Fitz and Coulson from an alternate-type universe, Aida was affected enough to turn to the dark side herself: she killed one agent and hurt May badly enough to take her out of commission.

In the Marvel Comics universe, the Darkhold, which also goes by the name "The Book Of Sins," was originally created by an Elder god named Chthon. Before he was banished from Earth, he managed to put all his evil spells and knowledge on a collection of indestructible parchments that became a book. Agents of S.H.I.E.L.D. has always taken a slightly different approach to traditional comic lore, and that's the case once again with the Darkhold.

Fans probably remember how the first part of Season 4 focused on Robbie Reyes and the team finding the book, which has eluded everyone from Red Skull to Nick Fury throughout the years. The reason the Darkhold is so important? It's supposed to contain infinite knowledge and if you read the book, it has the abilities to give you the things you want most.

A couple named Lucy and Joseph Bauer found the book, and became obsessed with it. Joseph used the knowledge from the book to build a Quantum Particle Generator, but the project engineer, Eli Morrow, wanted the book for himself. His obsession drove him to kill everyone who worked on the project, but when Joseph refused to tell him where the book was, Eli put him in a coma — where Joseph stayed until he was awakened by Lucy, who still wanted to find the book.

S.H.I.E.L.D. engaged in a race against time to find the book before Lucy did, and they succeeded — though not before Eli gained the knowledge to rebuild the Quantum Particle Generator. When Fitz and Coulson vanished into an alternate-type universe thanks to the machine, May used the Darkhold to save them by having Aida read the book and use that knowledge to get them home safely.

One of the more intriguing things about the Darkhold's comic history is that it's been a part of many characters, including Doctor Doom and Doctor Strange. Obviously, it's not an entire coincidence the show decided to introduce this artifact right before Doctor Strange hit theaters in November. Agents of S.H.I.E.L.D. has always tied its mythology to the Marvel Cinematic Universe and this is no exception. Clearly, the Darkhold will continue to be a prominent part of this season, and perhaps the future of the entire MCU, so I'm excited to see how it all plays out.