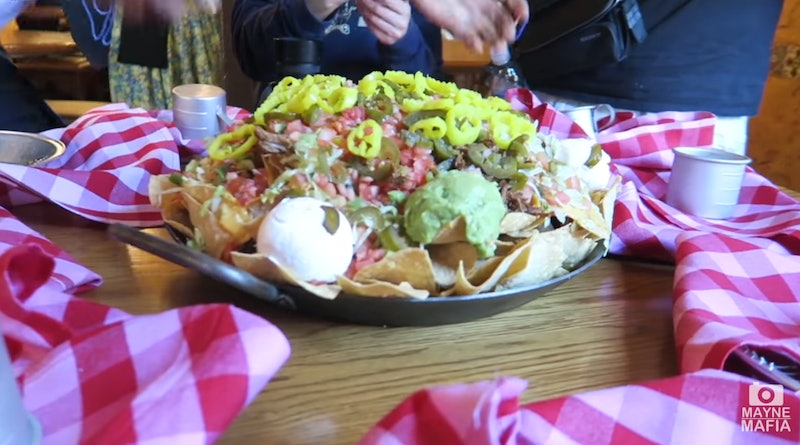 Be still, my Disney-obsessed and food-loving heart: There is allegedly a secret food challenge at Walt Disney World in Orlando, Fla., and it seems to involve the biggest plate of nachos I have ever dared to imagine. According to Disney Food Blog via Delish, if you arrive at the Pecos Bill Tall Tale Inn and Café in Frontierland in the Magic Kingdom at the right time of day, you can allegedly order something called the Nachos Rio Grande Challenge — but make sure you bring a lot of people with you. This secret menu item can literally feed a crowd. (Bustle has reached out to Walt Disney World for comment and confirmation of the challenge and will update this piece if/when we hear back.)

If all you want is info on how to order the Nachos Rio Grande at Pecos Bill, scroll down to the bottom of this post — but for what it's worth, I did some digging to see what else I could find out about the whole thing, and it's weirdly fascinating. The earliest mention I could find of the Nachos Rio Grande at the Pecos Bill Tall Tale Inn and Café dates back to February of 2017 — and, in fact, most mentions of this alleged secret menu item date back to that month. It’s not just the Disney Food Blog post cited by Delish, although that certainly looks like it’s from February (the post itself isn’t dated, but the URL includes the numbers "2017/02/02," which usually indicates the date of publication, and most of the comments are from early February this year); the Pecos Bill menu on fan-run information site WDWInfo which includes the item says it was last updated in February of 2017 as well. A wide array of videos on YouTube purporting to show the challenge were also posted in February, although this one claims in its title that the events depicted occurred in January. (A few videos were also posted after February, although I wasn’t able to find any that were posted before February.)

Whether all this is an indication of the actual date the nacho challenge was “added” to the menu or whether it’s just when everyone found out about it remains to be seen; I suspect it might be the former, though, given the way Disney Food Blog’s video on it talks about it. In any event, WDWInfo describes the Nachos Rio Grande as follows:

“This is a top-secret menu item and it's the biggest plate of nachos you've ever seen! This item is only served between 3:00 p.m. and 6:00p.m. Feeds 6-8 people and includes the Pecos Bill's VIP treatment.”

It’s listed as costing $90, although according to The Mouse For Less, Annual Passholders can get it discounted for $72.

First, cast members add special cowboy hats to their outfits, bring you and your dining party to a reserved table (which, by the way, is pretty notable — some Walt Disney World restaurants accept reservations, but Pecos Bill’s is not usually one of them), and set you up with tin plates, cutlery, and red gingham napkins. You’ll get pitchers of the non-alcoholic drink of your choice… and when your nachos are ready, pretty much every cast member working at that moment will parade to your table with a cart dressed up to look like a covered wagon in tow. Your nachos will emerge from this cart, after which you may feast to your heart’s content. After you finish, you’represented with a certificate proclaiming you to be Deputy of the Day.

But, if you really want to get an idea of what the whole spectacle is like, I suggest you watch this video from BigFatPanda:

Or this one from xDivineDanix:

Or this one from Spokesmayne:

And, honestly? If you’ve got enough people with you, $90 actually isn’t that bad. Amusement park food tends to be pricey no matter where you go, but if you’ve got a party of eight and you all tackle the nachos together, it comes out to $11.25 a person — not cheap, but actually not too bad for a theme park lunch.

If you want to order the Nachos Rio Grande at Disney World, here’s whatto do:

It seems, by the way, that there are a few “secret menu” items hidden throughout various Disney parks; according to Theme Park Tourist, for example, you can allegedly order Ice Cream Nachos at the Golden Horseshoe at Disneyland in California, and, well… now I know what I’m doing the next time I head out west to visit family.

More like this
Taco Bell Announced A Crunchwrap & Tostada Made With Cheez-Its
By Emma Garza
The 'Hocus Pocus' Sequel Finally Has A Release Date & It Makes Total Sense
By Shannon Barbour and Radhika Menon
Everything To Know About 'Scream 6'
By Jack Irvin and Jake Viswanath
Is The Insta-Famous Always Pan Actually Worth It?
By Jessica Goodman
Get Even More From Bustle — Sign Up For The Newsletter