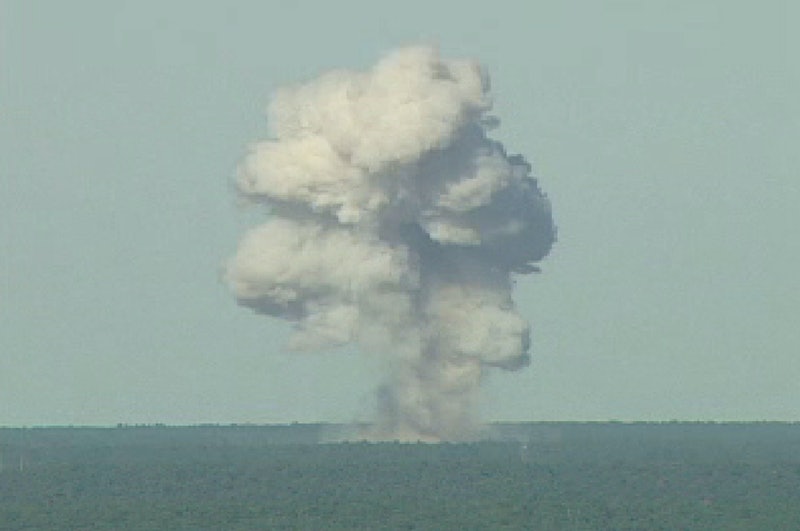 The recent and rapid escalation of U.S. military action in the Middle East has much of the world worried this week. Not only is this a dizzyingly fast flip-flop from Donald Trump's former America First foreign policy plan, but the use of unprecedented weapons, like the GBU-43/B Massive Ordnance Air Blast (MOAB), aka the "mother of all bombs," is a major cause for concern as well. The United States isn't the only country with some serious explosive tonnage, though. Russia has the "father of all bombs," and it's even bigger than the one just used in Afghanistan.

The reason that the MOAB was such a big deal this week is that it's the largest non-nuclear bomb to ever be used by the United States — it's the detonation equivalent of about 11 tons of TNT, 21,600 pounds to be precise. However, that doesn't necessarily mean that it is the largest non-nuclear bomb in existence, and in fact, it's not. According to Business Insider, Russia developed the father of all bombs in 2007, and it's got more than four times the explosive power of the MOAB. Despite being a full ton lighter than the MOAB, Big Papa has twice the blast radius and detonates with the same force as 88,000 pounds of dynamite.

Luckily, it doesn't look like the use of the FOAB is on the table for the foreseeable future. Russia hasn't made any moves so far to test or deploy the bomb, and really hasn't commented at all on the United States' decision to drop the MOAB in Afghanistan. For the most part, Russia's beef is in Syria right now. Therefore, the bomb in Afghanistan shouldn't exacerbate U.S.-Russia relations any further, except under one theoretical circumstance.

Since the motivation for bombing Afghanistan is somewhat unclear, other than it fulfills one of Trump's campaign promises to "bomb the hell out of ISIS," it's possible that it was an "I'll show you mine if you show me yours" type of deal. It sounds believably Trumpian, but the existence of the FOAB was publicly known dating back to its development in 2007. It doesn't necessarily make sense, but it could have been a power play to show the Russians what kind of tools are available to the U.S. military and whether the nation is really willing to use them. If Russia responds with use of their FOAB sometime soon, it could support this theory.

It's kind of amazing how much stuff human beings have come up with to kill each other — either of these parental bombs could kill thousands if dropped on a crowded metropolitan area. The Russian and U.S. governments have a heavy responsibility with these weapons at their fingertips, and could change the very course of world history if they are used again.