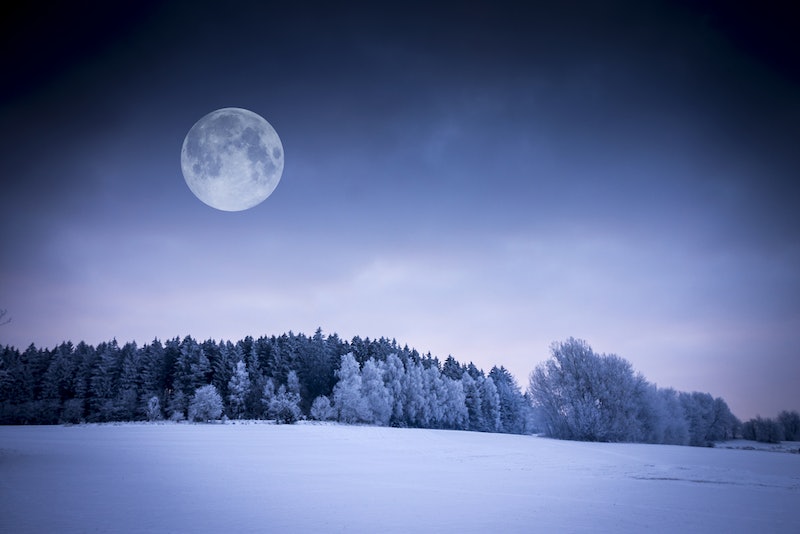 Every month, the moon goes through a lunar cycle that includes four very different phases. The two phases that we all pay the most attention to are the two most influential ones: the new moon and the full moon. These are the two most obvious phases (the new moon is either a teensy sliver in the sky or looks like there's no moon at all, while the full moon is quite large and noticeable), and they also affect us the most. February's full moon, which will rise on Feb. 19, is no exception. You might be wondering what we can expect to feel, and what the February full moon is called, as well as if it has any distinguishing features.

As it turns out, this month's full moon actually is quite special. According to EarthSky, this month's full moon will be a supermoon, which means it will look brighter, larger, and closer than your average full moon. A super moon occurs when the full moon coincides with the moon's closest approach to Earth in its orbit. So, yes, the moon will be closer than it usually is, making it appear larger — although, typically, the difference can be hard to see with the naked eye.

This one might be a bit different though. EarthSky reported that February's full moon is going to be the largest super moon of the whole year, and it will be accompanied by Regulus, the brightest star in the constellation Leo the Lion. So, yes, you can expect the sky to probably be pretty bright that night! This is a stark difference to February 2018, when there was no full moon at all.

This full moon, like all full moons, also has a name. In ancient times, people gave the moons names by month in order to keep track of the changing seasons — they followed the lunar month back then instead of the solar year. Europeans and Native American tribes named the moons based on features they associated with that season.

According to Time and Date, February's full moon is often called the Snow Moon. It has been known by other names as well, including the Hunger Moon, the Storm Moon, and the Chaste Moon. The Snow Moon got its name from the typically snowy conditions that occur in February, while the Hunger Moon comes from the fact that, because of the weather, food sources were hard to find and hunting conditions were very difficult.

This Snow Moon is rising in Virgo, and according to Dark Star Astrology, it is a perfect time for manifestation. It is also a good time for you to be able to gain the courage to say goodbye to negative situations and people who have been bringing you down. This full moon is a good time to re-evaluate and figure out what we no longer need in our lives. In general, this is the kind of energy that comes from a full moon, but the fact that it's in Virgo just intensifies that.

So, will we see snow during the Snow Moon? It depends on where you live, but that would definitely be a nice coincidence!