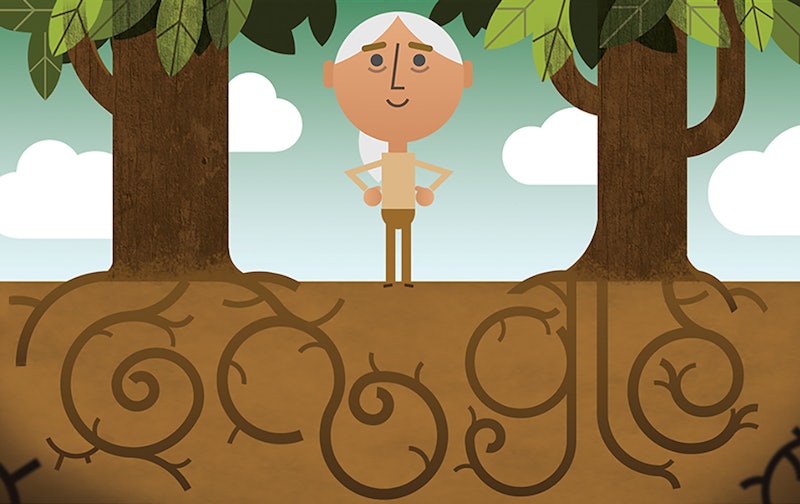 April 22 is Earth Day, and like in years previous, Google is celebrating the day with one of its beautiful signature Google Doodles. But this year, folks who head to Google are in for a special Doodle: Google has partnered with renowned primatologist Dr. Jane Goodall to create a special video Doodle for Earth Day.

In the Doodle, which is partially animated and partially footage of Goodall speaking, she remembers one of her most significant moments as a researcher in Tanzania, studying chimpanzees. "There was one moment when I was in Gombe National Park, and it began to pour with rain," she says. "And then the rain stopped, and I could smell the wet hair on the chimpanzees, and I could hear the insects singing loudly, and I just felt absolutely at one. And it was a sense of awe and wonder."

Goodall explains that when you spend so much time embedded in nature, you learn that "everything is interconnected." She adds, "Each little species, even though it may seem insignificant, has a role to play in the tapestry of life."

Goodall says her message for the "citizens of the world" is that there's no better day than Earth Day to "make a determined effort to live [our] lives in better harmony with nature." She also emphasizes that, "Every single individual matters, every single individual makes some kind of impact on the planet every single day. And we have a choice as to what kind of difference we're going to make." This year's Earth Day Google Doodle honors Goodall's legacy while inspiring more onlookers to effect change where they're able.

Goodall's openness about her stories and experiences is part of her philosophy of teaching conservation. She told Bustle in 2017 that "it takes stories to wake people up."

"We humans are destroying this planet, in spite of being the most intellectual beings to ever walk the Earth," she told Bustle writer Elizabeth Enochs. According to The Huffington Post, Goodall travels 300 days a year giving lectures about conserving our environment and the animals with which we share it. But Goodall told Bustle she knows "[t]here simply aren't enough days in the year, or years in my life, to reach everybody." For those she can reach, though, "Knowing you can make a difference is very encouraging, and makes you want to carry on as long as you can."

Goodall's work, and the work of the Jane Goodall Institute, also focuses on humanitarian causes like "improving health for women and education for girls," according to the institute's website. "Once people realize their power to make a difference in the lives of their families, communities and environment, there's no going back — only forward," the institute says on its website.

In the end, Goodall's approach to conservation is to take things day by day, and think of the future repercussions of our actions. Earth Day is an excellent opportunity to slow down and think about our society's daily impact on the environment, whether it's due to your driving a car each day, because you maybe aren't recycling as much as you could be, or because you could source your food more sustainably — or maybe you're already doing all those things, and it's now your turn to pass that knowledge on.

"If we would all think about the consequences of whatever it is that we're making, promoting, legislating about — what are the consequences?" Goodall told Bustle. "Not just now, but for the future. If we all thought in those terms about future generations, then I think it would start to make a big difference."

For ways you can make a difference starting on Earth Day, check out the day's official site.