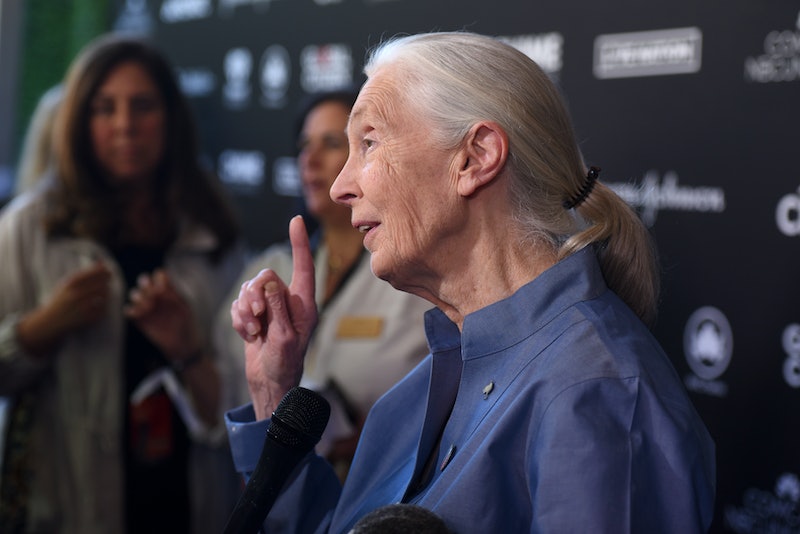 You probably know about Dr. Jane Goodall's revolutionary work with chimpanzees, but how well do you really know her? Since the 1960s, the 83-year-old scientist's work with chimps has challenged the scientific community to redefine what it means to be human, and accept the fact that non-human animals have minds, personalities, and emotions. The primatologist, ethnologist, and anthropologist has also written dozens of books on animals, received more than 40 honorary degrees, and was named a UN Messenger of Peace back in 2002. Dr. Jane is also a Dame of the British Empire, thanks to Queen Elizabeth II, but on top of all of her accomplishments, she also deserves the title of activist. In a new MasterClass, she's sharing how her experience working with chimps across a multi-decade career has informed her activism, and the lessons she's learned about sustainability — both environmental and emotional — along the way.

“I think it takes stories to wake people up,” Dr. Goodall tells Bustle. Her faith in the power of good storytelling is part of the reason Dr. Goodall travels 300 days a year giving lectures on climate change, conservation, and animal welfare. She's incorporating this love of storytelling in her 29-lesson MasterClass, titled "Jane Goodall Teaches Conservation." “We humans are destroying this planet, in spite of being the most intellectual beings to ever walk the Earth,” Dr. Goodall says. “There simply aren’t enough days in the year, or years in my life, to reach everybody — but hopefully, this MasterClass will reach out very widely, and as more and more people can have access to it, then it’s another way of sharing my message with people who care.”

“I guess I was born with many gifts, but one important gift was communication,” Dr. Goodall tells Bustle. She says watching her lectures inspire people to take action is one of the primary reasons she hasn’t burned out yet as an activist. “Knowing you can make a difference is very encouraging, and makes you want to carry on as long as you can,” Dr. Goodall says.

Fortunately for all of us, Dr. Goodall’s been “carrying on” since her Cambridge days, where she told her professors about observing chimpanzees in Tanzania’s Gombe Stream National Park using tools, communicating vocally, and showing affection — all behaviors which had previously been considered unique to humans. “I was told in 1962 at Cambridge University that I shouldn’t talk about chimpanzees having personalities, minds capable of reasoning, and certainly not emotions,” Dr. Goodall says.

Having just arrived at college at that point, Dr. Jane says she remembers being a little intimidated by her professors — but nothing could keep her from speaking up about what she knew to be true since she was a young child. Dr. Goodall says it was thanks to her childhood dog, Rusty, that she grew up understanding the sentience of non-human animals, but it was because of the chimps she observed in Gombe that the scientific community was forced to accept and explore this concept as well. "Science finally came to agree that we’re not the only beings with personalities, minds, and emotions,” Dr. Jane says. “So now you can actually study those things.”

Dr. Goodall says another reason she places so much trust in the power of good storytelling is because the stories of others have so often managed to alter her perspective on things. It’s exactly what happened for her when she read Peter Singer’s Animal Liberation, a book that details the shocking cruelties that have long been considered standard industry practices in factory farms, like battery cages and gestation crates.

“I had no knowledge of factory farming when I read that book [...] because it didn’t exist when I was growing up,” Dr. Goodall tells Bustle. She says meat was considered precious when she was a girl, so she never ate much of the stuff to begin with. After reading Animal Liberation, Dr. Goodall quit eating animals for good. “The next time I saw meat on my plate, I thought, this symbolizes fear, pain, and death — and from that moment on, I never ate any more meat.”

In addition to her eating habits, Dr. Goodall says that compelling stories are largely responsible for her continued hope in the eventual recovery of our planet. “You can look at innocent animals out there and children whose future is being jeopardized by the way we’re behaving today and not feel the desire to go on fighting,” Dr. Jane admits. “But you see, as I’m traveling around seeing all these terrible things, I’m meeting the most amazing people who are just tackling things that seem impossible, and they don’t give up.”

Dr. Goodall continues, “I’ve met so many projects that, for example, rescue an animal from the brink of extinction, and then work to protect that animal and make sure that it survives. I’ve seen places that we’ve utterly destroyed — and now, with time, nature can restore herself.”

But what Dr. Goodall says is perhaps even more powerful than the stories we live, hear, and tell are the stories that haven't happened yet — that might not even happen in our lifetimes. “The saying ‘we haven’t inherited this planet from our parents, we’ve borrowed it from our children’, simply isn’t true," Dr. Goodall says. "We’ve been stealing their future, not borrowing it."

Dr. Goodall says it saddens her to see how materialistic and work-obsessed humans have become, and she often worries about the sustainability of it all. “We’re not supposed to live 24 hours a day worrying about the next penny, which is now the way people live,” she says. "We’re not built to live in that sort of situation." In her opinion, "We should be more like the chimpanzees and live day to day.”

Ultimately, Dr. Goodall says it's the stories we might not even want to imagine that are capable of inspiring the most change — because those are the outcomes we might actually be able to prevent. "If we would all think about the consequences of whatever it is that we're making, promoting, legislating about — what are the consequences? Not just now, but for the future," Dr. Goodall says. "If we all thought in those terms about future generations, then I think it would start to make a big difference.”

More like this
25 Inspiring Quotes From Black Women To Celebrate Black History Month
By Kyli Rodriguez-Cayro and JR Thorpe
At 28, Rosie Perez Risked Her Career To Stop Playing Stereotypes
By Gabrielle Bondi
At 28, Debra Jo Rupp Was Living A Much Different '70s Show
By Grace Wehniainen
Zach Reveals The Chaotic 30 Minutes That Were Cut From ‘The Bachelor’ Premiere
By Grace Wehniainen
Get Even More From Bustle — Sign Up For The Newsletter
From hair trends to relationship advice, our daily newsletter has everything you need to sound like a person who’s on TikTok, even if you aren’t.