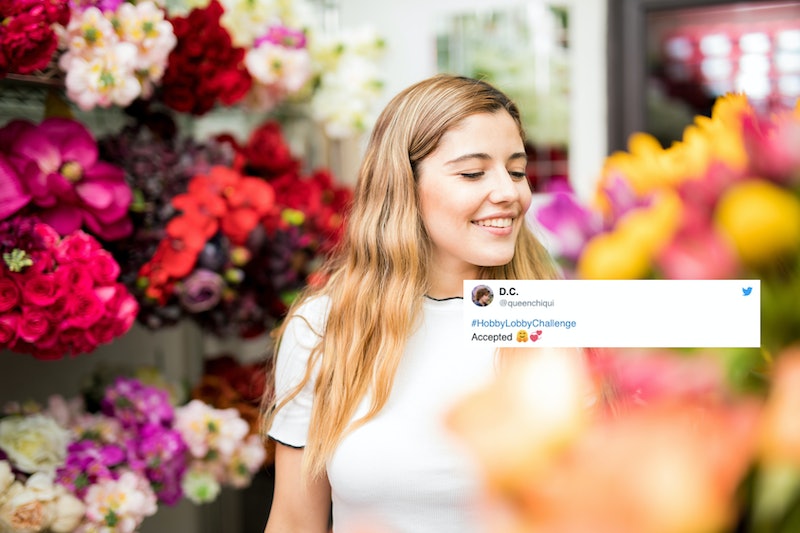 Photo trends regularly sweep the internet thanks to social media apps like Instagram and Snapchat, but the newest photo trend was born on Twitter, thanks to 22-year-old professional photographer Kelsey Maggart, BuzzFeed reported. Maggart kicked off the now-viral "Hobby Lobby challenge" by tweeting four photos of a friend posed amongst the craft chain's selection of fake flowers, and the snaps have since garnered more than 100,000 likes — not to mention kicked off a social media movement.

Maggart told Mashable the shots were originally taken for the "ugly location challenge" that swept social media photoshoots in January. She wanted to do a spring-themed shoot, but since she's based in Indiana, flowers were of course few and far between. "A few weeks ago my friend said he was shooting in Hobby Lobby so we both shot there, in different stores, to compare our shoots," Maggart told ABC News.

She added that she was "shocked" by the reaction from social media after she posted the photos. "My social media has been crazy recently and it’s just so insane to me that I was able to inspire this many people to go out and do this shoot themselves," she told ABC. "It really does feel amazing."

And though the trend is still called the Hobby Lobby challenge, ABC reports that contributing photographers "have since moved outside Hobby Lobby stores and into WalMart, Michaels, Target and other retailers."

There are definitely still some folks taking the #hobbylobbychallenge back to the source, though — and as one Twitter user said, they're making magic.

The trend may have been born out of the ugly location challenge, but it's hard to argue the results are anything but beautiful.

The flower section is one of the most popular settings for photographers taking part in the challenge.

And some photographers are following in Maggart's footsteps by photographing their friends.

A few are proving you don't always need high-tech photo equipment or a fancy studio to take stunning shots.

The trend is even reaching some unexpected participants.

And of course, #hobbylobbychallenge wouldn't be a viral trend without a few social media users dropping political jokes.

Apparently not everyone is thrilled by the Hobby Lobby challenge, though — Business Insider reported that retail workers "hate it," citing social media comments from folks who identify themselves as current or former retail employees.

"Speaking as a retail store employee — these are really cute but please put things back where you got them and don't make a mess someone else has to clean up!!!" one commenter said on Facebook.

"As a former retail employee, I would laugh at them and then tell them they're not allowed to take photos in the store (every shop I've worked at has this policy, to help prevent theft/break ins [sic] etc)," another said.

Maggart stressed the importance of not needing perfect locations to be creative, telling PopSugar, "So many people have told me they're inspired by my choice of locations, so I think it's just a step outside of their comfort zone that a lot of beginners needed." The sentiment echoes a November 2017 tweet Maggart posted about the ugly location challenge, where she said, "[Y]ou don't have to love your locations to love your shoots."

Aminah McKenzie, a photographer who contributed her own beautiful shots to the Hobby Lobby challenge, said the trend is truly worthy of the "challenge" title. "You are very limited to the amount of space and lighting," she told PopSugar. "I wanted my photos to seem a little different, so it was a bit challenging, but I loved the way they turned out."

She added, "I think others are so drawn to it because it's quite refreshing knowing that you don't need the best location or lighting to make an image beautiful. It's all about how you utilize the space and how you make it your own."

New contributions to the challenge are still being posted, and considering the trend's origins, it won't be surprising if the #hobbylobbychallenge inspires a few new trends of its own.