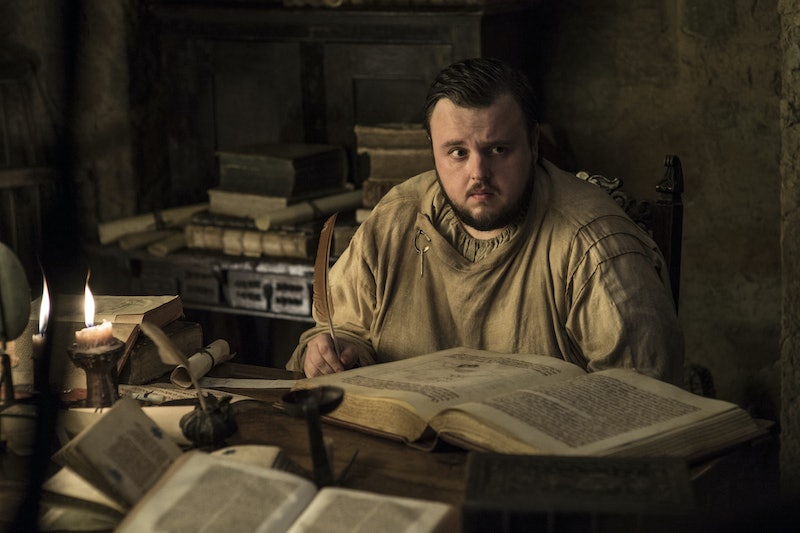 For all of its fantasy tropes, A Song of Ice and Fire doesn't have too many ultra-magical items kicking around. Sure, there are special swords made of Fancy Metal, and there are poisoned hairnets and golden hands. There are dragon eggs which eventually hatch into sweet lil' dragon babies. But there is no One Ring that can be hurled into a volcano to stop all the evil nonsense from happening. There's no unbeatable Elder Wand. There's no Infinity Gauntlet. There's essentially no single quest object that can neatly tie up the loose ends of any one of George R.R. Martin's many (many) subplots.

Except for maybe the Horn of Winter.

OK, so maybe the horn can't tie up every subplot. But if the true struggle of A Song of Ice and Fire is finding balance between the titular forces of ice and fire, then the Horn of Winter could play a huge role. That's because the Horn of Winter, also called the Horn of Joramun, might be able to bring down the Wall.

It seems like the HBO adaptation has maybe just given up on the horn entirely, seeing that they (spoiler alert) decided to have a big ol' zombie dragon just bust on through the wall on its own. But in the books, at least, the horn has been set up as a mythical force capable of bringing down the Wall and "waking giants from the earth." Depending on who wields it, the horn could spell the end for the White Walkers or for the Seven Kingdoms. It seems pretty essential, especially since it made the cover of the next book in the series.

And Sam Tarly may have taken it to grad school by mistake.

Supposedly, way back in the ancient past of George R.R. Martin's imagination, the Wall was built from ice and magic to keep the White Walkers at bay. By the time our story begins, though, most people have stopped believing in White Walkers, and the Wall is treated as a border against the human wildlings who live up North, staffed mostly by bastards and criminals.

But we know that there is some legit magic still alive and well in the Wall—Sam and Gilly are able to pass through a creepy talking gate in the Wall to get back into the Seven Kingdoms, but their friendly zombie buddy Coldhands is not. It seems like the Wall is more than just a physical obstacle: it's full of protective magicks and whatnot.

Not long after the Wall was built, though, a Lord Commander of the Night's Watch went a little off the rails. He married a woman "with skin as white as the moon and eyes like blue stars" who may have been a lady White Walker (side note: why are all your White Walkers dudes, HBO? Women can't be terrifying ice monsters?). Then he declared himself the Night's King, and starting ruling from one of the castles on the Wall.

(This is not to be confused with the TV character "The Night King," who seems to just be a... super White Walker?)

According to legend, the Night's King and his icy queen committed terrible atrocities as rulers of the Wall. So the reigning Stark king teamed up with Joramun, the King Beyond the Wall, to take him down. They accomplished this with the help of a handy horn that Joramun had (made? purchased?). Blowing it once woke giants from the earth.

Blowing it again is supposed to take down the Wall itself.

Fast forward to when our story takes place, and the wildlings have been searching for this Horn of Winter. Mance Rayder, the current King Beyond the Wall, claims that he's found it. He and his wildlings just want safe passage to the other side of the Wall, where they'll be protected from the White Walkers' army of snow zombies. But if the Night's Watch won't let them through, Mance threatens to blow the horn and take down the Wall entirely, leaving everyone in danger.

Of course, our good ol' boys in black capture Mance before he can blow the horn, with the help of Stannis "Killjoy" Baratheon. Stannis's girlfriend Melisandre then burns Mance's big, fancy horn, along with Mance himself. So... I guess that's the end of the Horn of Winter?

Not quite. Firstly, Melisandre doesn't actually burn Mance because our girl Mel always likes to have an extra supply of king's blood on hand. Secondly, our best friend Tormund admits to Jon Snow that the huge, fancy horn was probably not the horn of legend:

"She burned that fine big horn, aye. A bloody sin, I call it. A thousand years old, that was. We found it in a giant's grave, and no man o' us had ever seen a horn so big. That must have been why Mance got the notion to tell you it were Joramun's. He wanted you crows to think he had it in his power to blow your bloody Wall down about your knees. But we never found the true horn, not for all our digging."

So where's the real horn? George R. R. Martin wouldn't make us listen to all that backstory and then never give us the real Horn of Winter, right?

Well, first of all, he totally would. Second of all, there have been two other horn sightings in A Song of Ice and Fire: Euron Greyjoy, professional Creepy Uncle, has a huge "Dragon Horn," which he claims can be used to control actual dragons. Blowing it can also literally kill you, but Euron still plans to use it to swipe one of Dany's dragons when she's not looking.

It seems like Euron's Dragonbinder horn might be the "fire" horn to Joramun's "ice" horn, though, so they're probably not the same thing.

And then there's the old, cracked warhorn that Jon's doggie Ghost found beyond the wall. It was buried in the snow with a whole mess of dragonglass, which suggests it was used to fight White Walkers back in the day. But the horn is too cracked to make a sound, so Jon gives it to his nerdy friend Sam for safe keeping.

Sam thinks that the horn is probably useless, but he still makes a point of keeping it even when he barters away most of his other possessions. Last we saw him, Sam was getting settled in at the Citadel, and he still had the horn. Hopefully, if he's really at grad school to learn about White Walkers, Sam will realize that this simple, cracked horn is far more than meets the eye. Because if the third Indiana Jones movie has taught us anything, it's that the Ultra Magical Item is always more plain and unassuming than you'd expect.

So Sam almost certainly has the true Horn of Winter. And he's studying to learn how to defeat the White Walkers. But he's also very, very far from the Wall, with a broken horn, in a Citadel infested with Faceless Men.

Let's just hope that Sam figures out the power he's holding before it's far too late.