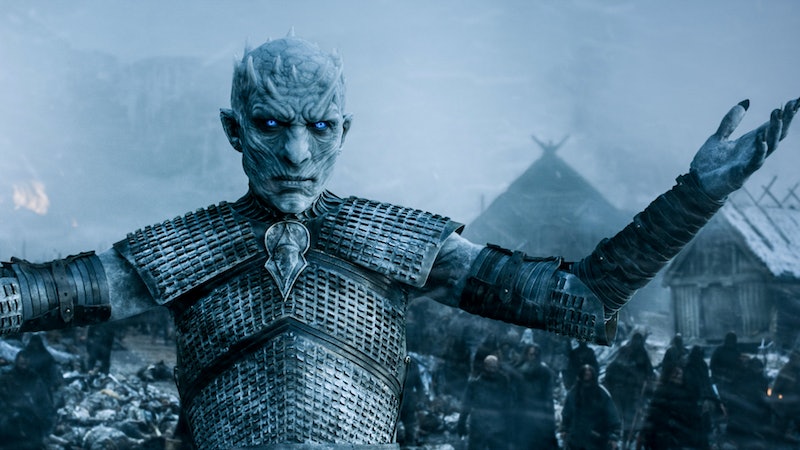 On the August 20 episode of Game of Thrones, Jon Snow and a whole bunch of grizzled fan-favorite fighters are heading to the Wall to do the unthinkable: capture a White Walker. Or are they? Viewers sometimes use the term “White Walker” to refer indiscriminately to any supernatural being that’s planning to invade Westeros when winter comes, but they’re not all the same — some are White Walkers, and some are wights. So, what’s the connection between White Walkers and wights?

Game Of Thrones fans already know the origins of the White Walkers, thanks to the Children of the Forest who explained things to Bran last season. Thousands of years ago, the first White Walker were men, turned into ice creatures by the Children to protect them from other humans who’d recently migrated to Westeros. The White Walkers weren't cool with that idea, though, and during the longest Winter in recorded history they attempted to take control for themselves by killing everyone in their path and recruiting them to their undead armies. They were defeated and driven back North of the Wall during the War for the Dawn, where they’ve been ever since, turning infant babies into more White Walkers and using their ice powers to freeze everything.

But back to that undead army I was just talking about — those are the wights. Although the word “wight” means “living being” or “creature” in Old English, the term is now generally used to describe the undead in fantasy stories; Tolkien even used it in Lord of The Rings. In Game Of Thrones, however, wights are a bit closer to old-school Voodoo zombies: They’re reanimated corpses brought to life by the White Walkers to do their bidding, and don’t seem to have any will of thought of their own. They can also be destroyed by regular fire, unlike White Walkers.

Except, the White Walkers don’t have a monopoly on wights in Westeros — as George R.R. Martin recently revealed in an interview with Time, there are also fire wights, and Beric Dondarrion is one of them.

His memories are fading, he’s got all these scars, he’s becoming more and more physically hideous, because he’s not a living human being anymore. His heart isn’t beating, his blood isn’t flowing in his veins, he’s a wight, but a wight animated by fire instead of by ice, now we’re getting back to the whole fire and ice thing.

Regardless of whether they’re animated by fire or ice, it’s unclear how the magic that gets wights moving actually works. Clearly fire wights (maybe Jon Snow is one too?) have a little bit of an easier time acting like their old selves, and they clearly don’t need to maintain any kind of physical closeness to the beings who revived them — Jon and Melisandre certainly aren’t, and as far as I know there wasn’t a White Walker lurking around the corner when the Night’s Watch first encountered ice wights in Castle Black.

But what happens if a White Walker is destroyed? Do the wights keep moving independently, or are they tied to the magic of their creators? I suppose if Thoros of Myr gets killed at Eastwatch in the next episode and Beric Dondarrion drops dead, too, that might be an answer.

Until that happens, though, I guess the only way to know for sure is to keep watching Game of Thrones to see what other tricks the White Walkers might have up their metaphorical sleeves.