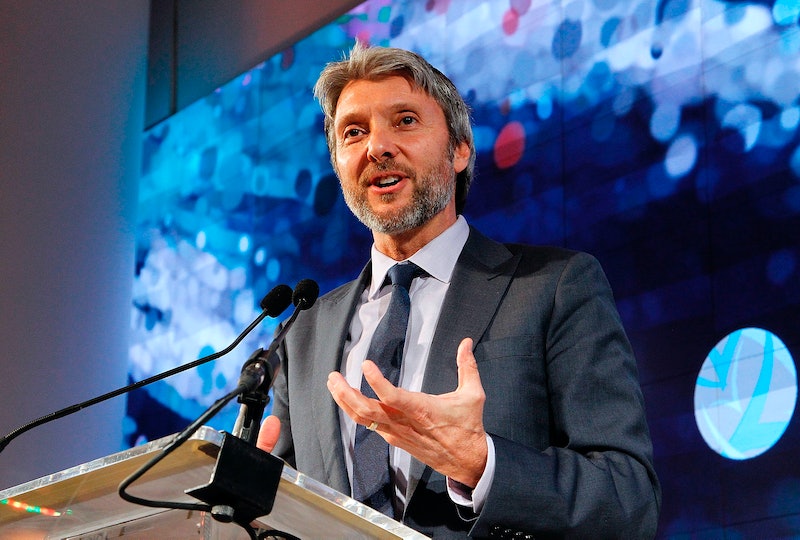 Since the feminist movement picked up steam in the 1960s and transitioned from one ideological wave to the next, one tenet has remained constant: both women and men must band together to achieve a more egalitarian society. Promundo, a global organization that promotes gender justice through research and policy development, is dedicated to engaging boys and men worldwide to challenge the most severely ingrained gender norms. Earlier in 2017, Promundo began studying the "man box" to determine how best to transform what it traditionally means to be "masculine." And in Trump's America, the findings are more consequential than ever.

Guys who are in the man box who believed in these rigid views about manhood were more likely to say that they had done some kind of harassment of women and girls.

Sexism is oftentimes rooted in gender norms that have become so accepted, they’re barely noticeable. And exposure to these gender norms begins during boyhood. "Children start facing norms that define 'masculine' and 'feminine' from an early age," UNICEF's page on "early gender socialization" reads. "Boys are told not to cry, not to fear, not to be forgiving and instead to be assertive, and strong."

According to Promundo founder Gary Barker, these societal expectations can contribute to sexist behavior later in life. So, Promundo launched a new study, "The Man Box: A Study on Being a Young Man in the US, UK, and Mexico," alongside Axe to map out the consequences.

“[The man box has] been a term used by advocates and colleagues working in the field of pro-feminist men's work for a very long time, referring to just the notions that boxed us in about what it means about men,” Barker explains. “That we're not supposed to ask for help, that we have to show our dominance over women and over other men, that we're more likely to fight than have a dialogue about it, and that we're told these things sort of from the moment that we're born.”

The "man box" and toxic masculinity aren't new concepts — Promundo's study builds upon findings from numerous others on masculinity. For example, as far back as 1992, Dr. Ronald Levant created the Male Role Norms Inventory, which evaluates how strongly a man conforms to masculine ideologies prevalent in the western world including aggression, homophobia, and restricted expression of emotion, among others. In 2007, research conducted by both Levant and Katherine Richmond suggested that men who adhere to these ideologies are more likely to fear intimacy, be sexually aggressive, and feel hesitant to seek out psychological help.

Of course, no one is forcing men to fulfill these outdated expectations and harass or assault women. An individual is always responsible for his or her actions — and that will never change. But it would be ignorant to overlook the fact that young boys are conditioned to act in ways that could ultimately prove toxic to both them and women. If the way boys were raised didn't matter, articles such as Claire Cain Miller's "How To Raise A Feminist Son" wouldn't be so renowned. And neither would the United Nations Women's "He for She" campaign. As Emma Watson, a UN Women Goodwill ambassador, said during a speech promoting "He for She" in September 2014, "I’ve seen men made fragile and insecure by a distorted sense of what constitutes male success. Men don’t have the benefits of equality either."

It's frightening, yet telling, that U.S. men who reported feeling confined to the “man box” are six times more likely to have sexually harassed a woman before. In addition to correlating sexual harassment with the “man box,” Promundo's study also forces men to be self-reflective and realize that they may not be as feminist as they think. Barker points out that it’s not enough as a man to say you’ve never sexually harassed a woman. To achieve true equality, men, alongside women, have to take action. “[It’s] great that you're with us, but you're not done,” he tells them.

Our work, it only exists because of all the important work that key women's rights partners have done everywhere.

And you need not look further than the White House to realize it. Barker suggests Trump has perpetuated the toxic masculinity America should be trying to root out of its system. If the man in power dismisses his joking about sexual assault as “locker room talk,” other Americans will be empowered to do the same. The current American political situation, therefore, has made Promundo’s mission all the more necessary. And while it may feel as though there’s a “big wave of conservatism … smashing us in the face,” as Barker puts it, there’s also a silver lining. Young people — both men and women — are becoming more aware of the inequalities enmeshed within American society. And they’re doing something about it, whether it’s marching on Washington or attending local demonstrations and protests.

Promundo’s mission to “promote gender equality and create a world free from violence by engaging men and boys in partnership with women and girls” isn’t confined to the United States. According to Barker, the organization initially born in Brazil is now active in over 60 countries and has worked alongside over 700 non-governmental organizations. And its report on the “man box” is just the tip of the iceberg. For example, the organization’s most recent report titled “State of the World’s Fathers” examines the role men around the world play in child care. In addition to funding in-depth reports on gender equality, Promundo has also pioneered various initiatives, such as MenCare and MenEngage, which work to combat violence against women and teach men how to become allies in the fight for women’s reproductive rights.

Regardless of where Promundo ventures next, its roots will remain the same. “Our work, it only exists because of all the important work that key women's rights partners have done everywhere,” Barker says. Now, it’s time to engage men to break away from what it traditionally means to “be a man” so that society can raise feminist boys who grow up to be genuinely feminist men.