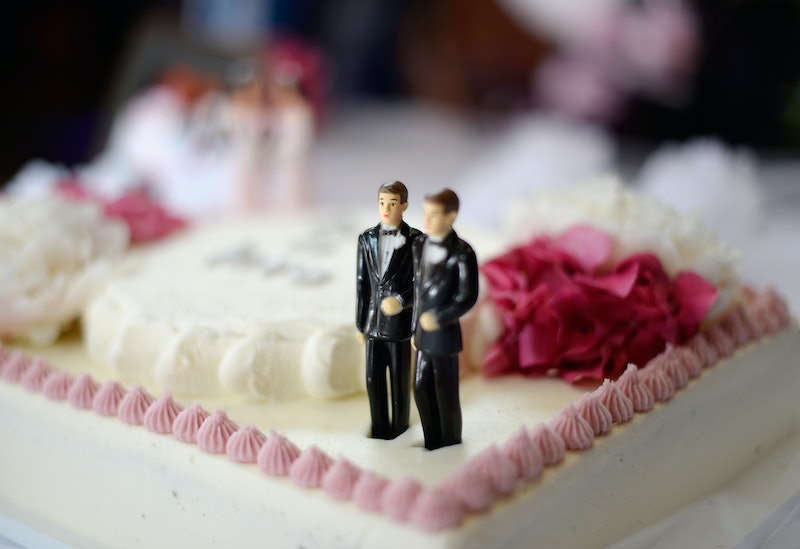 It isn't every day that a cake triggers a Supreme Court case, which makes the dispute Supreme Court justices will begin hearing today particularly interesting. But there's more to the Masterpiece Cakeshop case currently before the Supreme Court than just cake. In fact, the case could prove significant in determining how and where discrimination laws, freedom of expression, and religious liberty intersect.

After a five-year legal battle, the Supreme Court began hearing arguments in the Masterpiece Cakeshop, Ltd. v. Colorado Civil Rights Commission case Tuesday. The case centers around a dispute between baker Jack Phillips and two men he refused to create a custom wedding cake for. Supreme Court justices will determine whether Colorado's public accommodation laws, which prohibit discrimination in places like retail stores and other service establishments, violate a person's right to free speech when used to force someone to create an expression that contradicts their religious beliefs.

In 2012, Charlie Craig and David Mullins visited Phillips' Masterpiece Cakeshop in Lakewood, Colorado, to order a custom wedding cake. The two men planned to throw a party locally in celebration of having been legally married in Massachusetts. (While same-sex marriage had been legally recognized in Massachusetts since May 2004, it wasn't until 2014 that Colorado legalized same-sex unions.) However, when Phillips learned the two men wanted him to create a cake to celebrate a same-sex union, he refused, citing his religious belief that marriage should exist only between a man and a woman. According to CNN, while Phillips refused to make Craig and Mullins a wedding cake, he did offer to make them other baked goods.

"I serve all who walk through my doors, people from all walks of life," Phillips told Colorado Public Radio. "Like many other creative professionals though, I do not create custom designs that conflict with my conscience... It's never about the person making the request, it's about the message communicated on the cake." Phillips has previously said he also won't create cakes designed to celebrate Halloween.

After being denied a custom cake, Craig and Mullins filed a complaint against Phillips with Colorado's Civil Rights Commission. They argued the state's public accommodation law prohibited him from discriminating against them on the basis of sexual orientation. The commission ruled in their favor and Phillips then appealed the case to the Colorado Court of Appeals.

In 2015, the court upheld the commission's ruling. The following year, the Colorado Supreme Court declined to hear the case, and the conservative group Alliance Defending Freedom, which is representing Phillips, appealed to the Supreme Court. The nation's highest federal court agreed to review the case in June this year.

Since then Phillips has received the backing of the Trump administration as the Justice Department filed a brief on his behalf in September. In the brief, Acting Solicitor General Jeffrey B. Wall argued Phillips' cakes equated to a form of expression and forcing him to create such an expression for an event that contradicted his religious beliefs was a violation of his First Amendment rights.

But Craig and Mullins have argued that a cake is just a cake, and not a form of artistic expression. They've also said that allowing business owners to refuse service based on religious beliefs could set a precedent for legalizing further discrimination.

"A loss at the Supreme Court could open the door to many forms of discrimination that have long been outlawed in our society," TIME reported Mullins said. "Could a hotel owner refuse to rent a room to an interracial couple because their religious belief believes that the races should not mix, or could a business owner refuse to hire a single mother because their religion believes that mothers should be married?"

While the Supreme Court began hearing arguments in the case Tuesday, it could be months before they weigh in with a verdict. According to NBC, Supreme Court justices likely won't decide the case until sometime in June 2018.