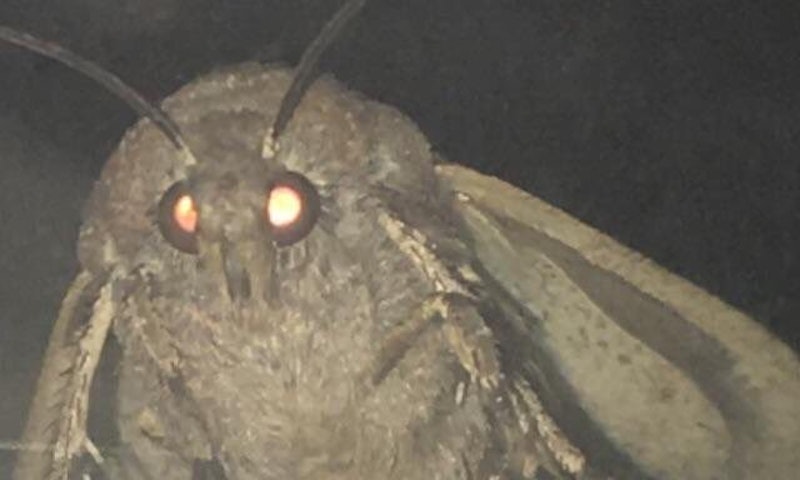 You've likely used the phrase "like a moth to a flame" at some point during your life, and there's a reason people associate those two things — moths are attracted to light. It only makes sense that someone would combine these two things — and now they have. If you've been on social media at all in the past week, you've likely noticed the slew of moth lamp memes floating around the internet, and you've likely wondered... why?

According to Know Your Meme, moths are having a moment on social media because of a video of a giant moth that made its rounds on Reddit this summer. Likely because the moth was huge and terrifying and also looking in through a window, people immediately began memeing the creature because it's 2018 — that's what we do now. Moth lamp mania has gained so much momentum that there's even an Instagram account dedicated to moth memes! The meme usually contains a photoshopped picture of the moth from the Reddit video, in addition to some reference to a lamp, because moths love lamps.

Personally, moths — or bugs of any kind — are not my jam. I call on my roommate whenever there are any bugs in our apartment. But, moths are a special kind of evil. They eat clothes and disrupt lazy outdoor evenings, crashing the party by circling the porch light in droves. If the thought of moths swirling around your lamp makes your skin crawl, then the giant moth lamp memes on Twitter are going to make you want to spend more time in the dark.

According to Live Science, moths like artificial light because it mesmerizes them. They just can't help themselves. "The thinking is that they become dazzled by the light and are somehow attracted," Jerry Powell, an entomologist at the University of California, Berkeley, who specializes in moths, told Live Science. If moth lamps are going to give you pre-Halloween nightmares, you might want to stop reading right now because, IMO, these moth lamp memes are next-level creepy.