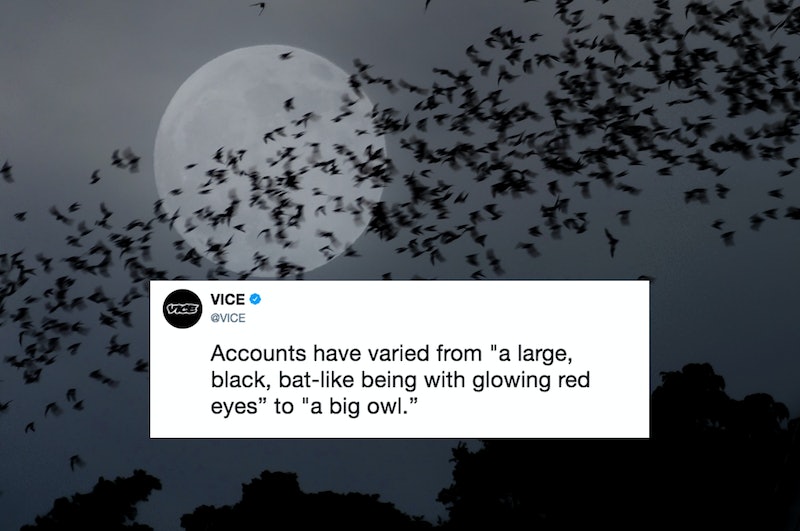 I, for one, was under the impression that Halloween was well behind us — but if recent witness accounts in Chicago are to be believed, we're not quite out of the danger zone yet, creepiness-wise. According to VICE, over the course of 2017, 55 reports were submitted by residents of and visitors to the Windy City, who claimed to have caught a glimpse of an extremely mysterious-sounding creature called the "Mothman." Gah, even the name sounds creepy. So, considering so many people are reportedly seeing this mythical creature, it's worth asking: what is the Mothman? I mean, if people are reporting seeing "a large, black, bat-like being with glowing red eyes," then I guess we all deserve some more information about the whole situation.

To understand the Mothman's roots, we need to go back a few decades, and east of Chicago a few hundred miles. According to Atlas Obscura, residents of Point Pleasant, West Virginia claimed sightings of the creature in question in the late '60s. Reports described "a mysterious, vaguely humanoid creature said to have glowing red eyes and massive wings." At roughly the same time and location that the first sighting was reported — Dec. 15, 1967 — 46 people were killed in Point Pleasant when the Silver Bridge plummeted into the river, per Mysterious Universe. Many suggested a connection between the mysterious being and the accident, which fueled the start of the Mothman legend. Today, Point Pleasant is home to the Mothman Museum (not to mention an annual Mothman Festival), a quirky storefront that displays newspaper clippings from those early sightings and tokens of the cult pop culture phenomenon that the Mothman would grow into over the ensuing years.

In 1975, John Keel furthered the Mothman story with The Mothman Prophecies, his personal account of the events that had taken place in West Virginia several years earlier. The book has since been published in 13 languages and was the basis for a 2002 film of the same title starring Richard Gere and Laura Linney. Per Comic Vine, a character called Mothman also appears in 2009's Watchmen.

The most recent round of alleged Chicago sightings, of course, might take Mothman's story out of fiction and shuffle it closer and closer to the real world. According to VICE, descriptions from the series of 2017 Mothman reports in Chicago range from "a large, black, bat-like being with glowing red eyes" to "a big owl" to something vaguely resembling a "Gothic gargoyle." Lon Strickler — who authored the recently released Mothman Dynasty: Chicago's Winged Humanoids and has been investigating paranormal sightings since the late seventies — tells VICE that the alleged appearances of Mothman in Chicago are unique because of their urban location. The fact that so many sightings took place in a single short period of time is also unusual, he shares.

The good news for Chicagoans (and all of us, really, because the last thing we need is another global threat) is that Strickler does not think that the Mothman sightings were any sort of threat or preview of bad tidings. "These beings are less aggressive than the one in Point Pleasant for the most part," he tells VICE. "I think they're flesh and blood beings that aren't of this world." The Point Pleasant counterpart, on the other hand, was thought to be an omen for the Silver Bridge disaster 50 years ago.

Whatever the alleged beings are (or aren't), I have a good feeling we're not finished hearing about them. People love a good paranormal legend — and they love it even more when they get a chance to claim a sighting of their own. Chicagoans, prepare to see your friends and neighbors looking to the sky for their chance to glimpse this red-eyed creature... or otherwise ducking and covering, which is probably what I would be doing.

More like this
Meet The Disney Imagineer Bringing 'Guardians Of The Galaxy' To Epcot
By Charlie Mock
If Your Refrigerator Is A Mess, These 25 Organizing Products Can Help
By Courtney Young
An Honest Review Of The TikTok-Famous WalkingPad
By Kaitlyn Wylde
Here’s What Sarah Jessica Parker’s Canned Cosmo *Actually* Tastes Like
By Emma Garza
Get Even More From Bustle — Sign Up For The Newsletter